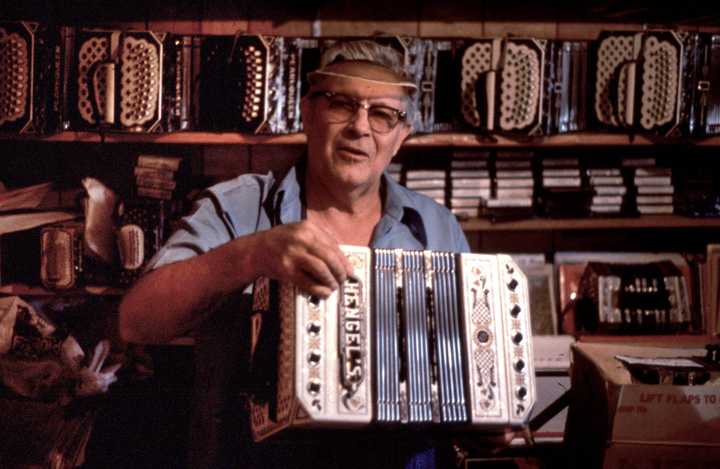 Christy Hengel's parents and grandparents grew corn, oats and barley on a farm about four miles east of Wanda, in southwestern Minnesota. As a child, Hengel became interested in music. "My folks had an old record player, and I loved to listen to old Whoopee John Wilfahrt," he said. "He was the first musician from the New Ulm area to record, in 1927. He was a concertina player, and he played polkas and waltzes, and he had his own style. It's just got a different sound. He had one sax, one trumpet, trombone, tuba, no drums at first. Drums didn't come in until around 1931."

Wilfahrt was a local bandleader and concertina player who was widely known as a musician in the Dutchman or New Ulm polka style. The concertina and tuba are critical to this style, which involves more relaxed, smoother tempos than the Polish or Slovenian polkas. By the time he was 17, Hengel had saved up to buy his first concertina. "My uncle Mike Macht played concertina, and so did my cousin, Mike Turbis, and it was from him I got the first one, but nobody was there to give me lessons. I learned by ear. It took me about six months to play a few tunes at a Christmas program, and in about a year, I could get by."

In 1947, Hengel started his own five-piece band. "It was called the Chris Hengel Band," he said. "They didn't call me Christy until I had my new music stands painted. I told him to paint Chris Band. He said put Christy's band and that's what I did. I was known as Christy from then on."

In the 1950s, Hengel played with the Six Fat Dutchmen and the Jolly Brewers, which toured extensively throughout the Midwest and traveled as far south as Texas. He also had the opportunity to play with Whoopee John Wilfahrt's band. After Wilfahrt's death, his musicians became the house band for the Soto Ballroom in Springfield, Minnesota, and from 1956 to 1960, Hengel teamed up with the group on weekends. Hengel married Valera Runnerstrom in 1962 and settled in New Ulm in 1965.

Like many young men raised on the farm, Hengel was a tinkerer. He once built a motorcycle from scratch and rode it about 5,000 miles. He began spending his summers doing farmwork and his winters tearing down, rebuilding and repairing concertinas. In the process, he developed strong ideas about construction and tonal quality. When the world-renowned Patek concertina factory became available for sale after the death of its owner in the early 1950s, Hengel bought all the equipment and spare parts and set up his own business. He made a number of improvements in the instrument, including easier lever action, lighter weight and the impeccable tuning for which his concertinas became famous.

Hengel made hundreds of concertinas. "The first one went to the Babe Wagner Band, and today every one of them is still playing," he said. "They last for generations. When one owner goes to the grave, someone else gets it or sells it and goes on from there. I'm still working on concertinas, even though I can't play much. I had my fling with playing all those years. I'll still go out in spring, summer, and fall, but not in the winter."