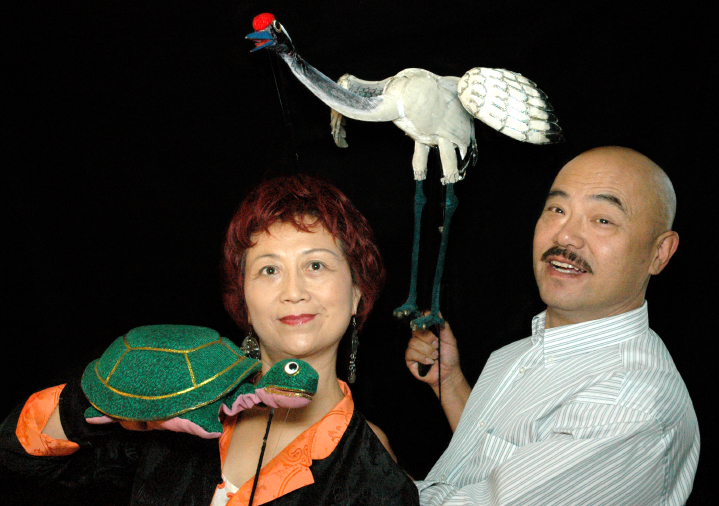 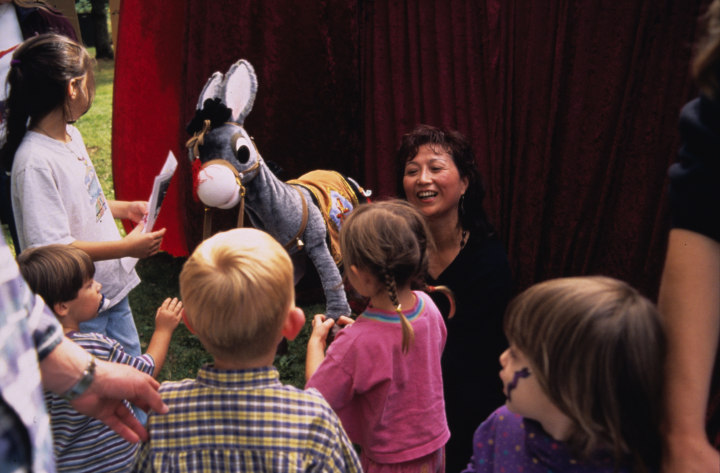 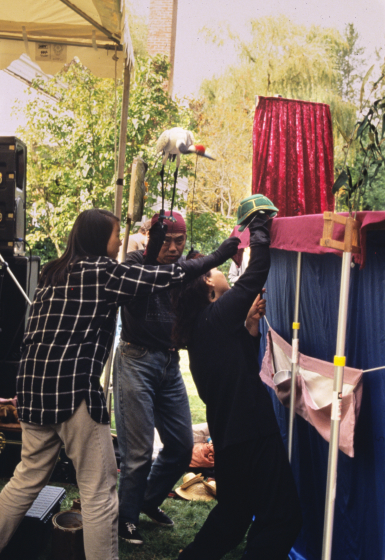 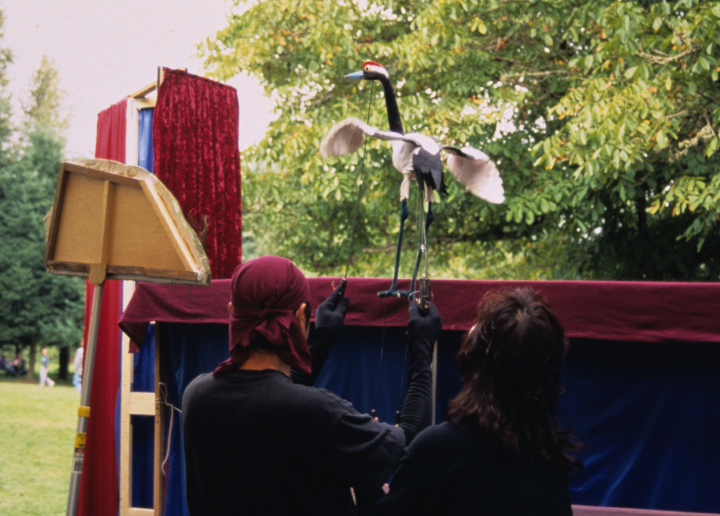 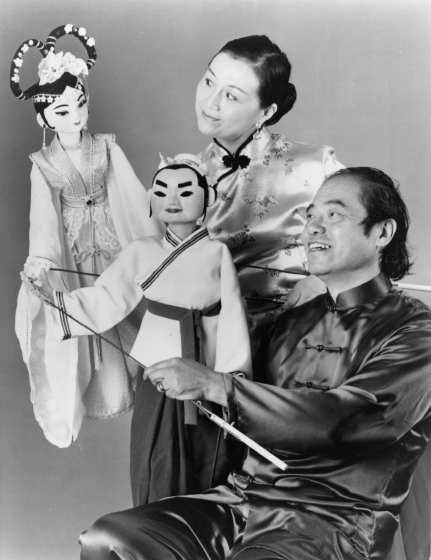 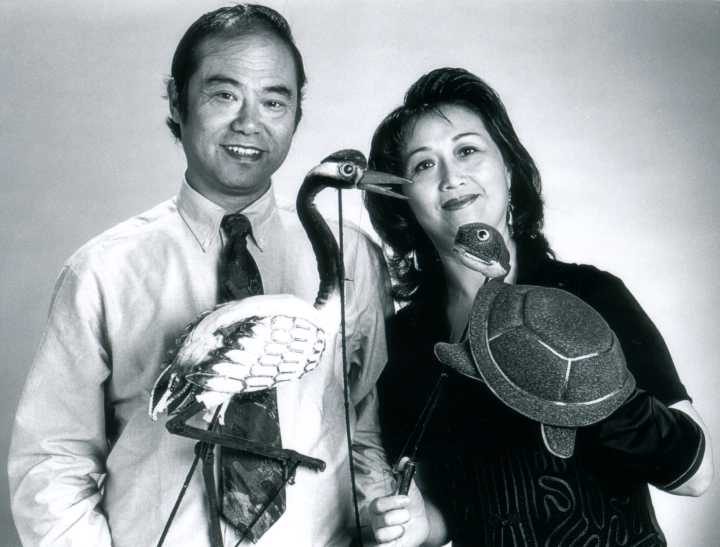 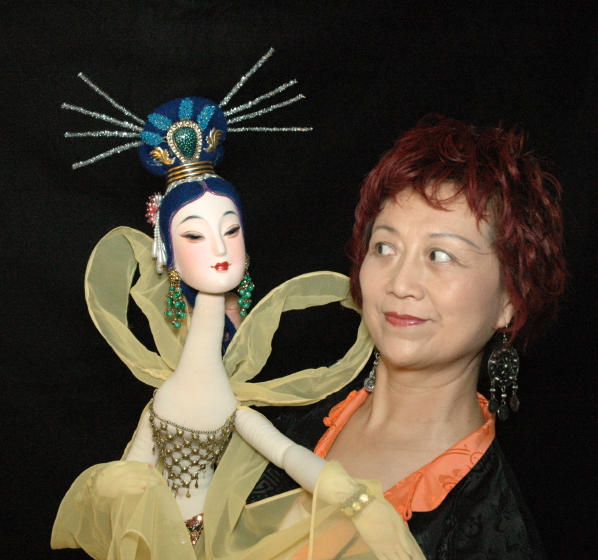 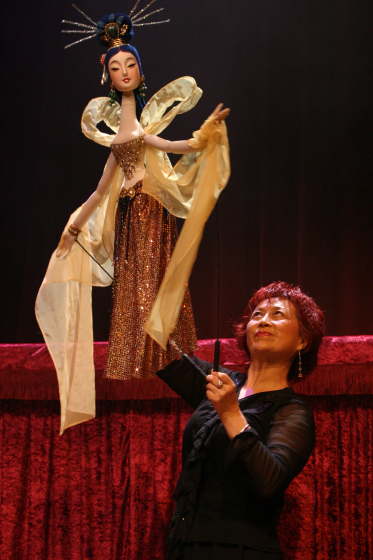 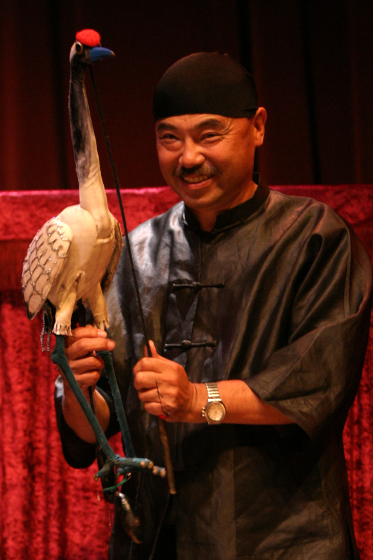 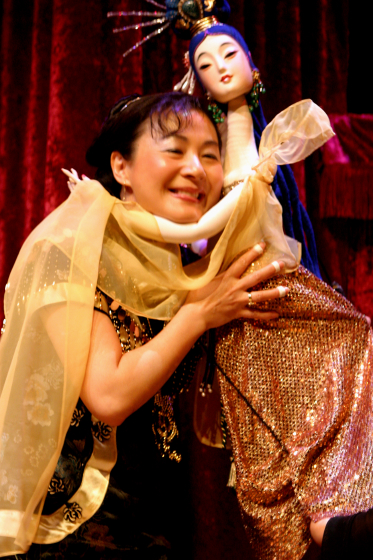 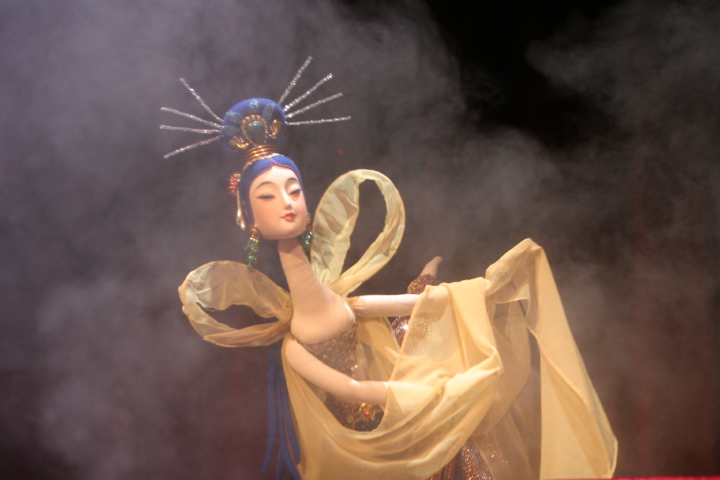 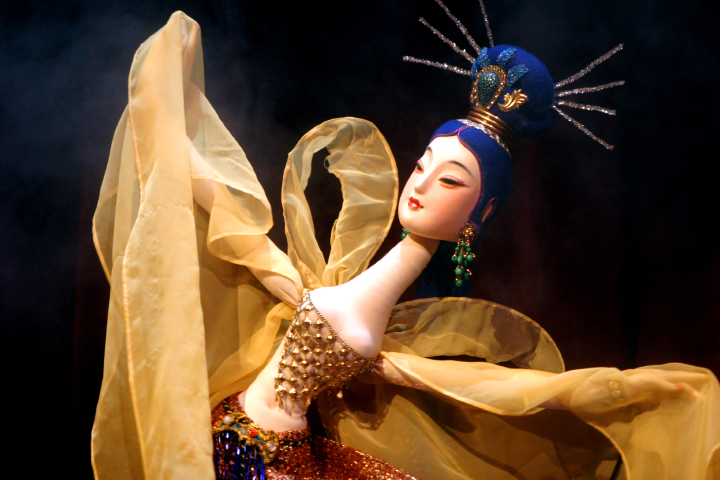 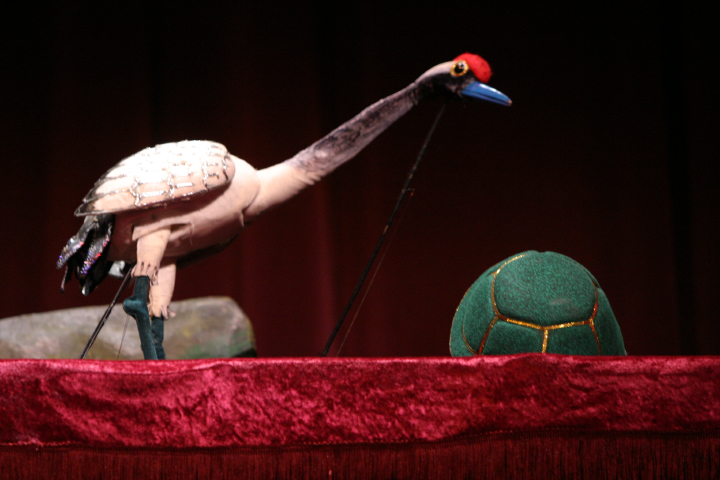 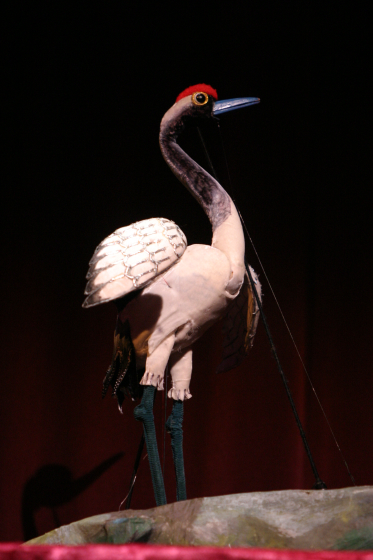 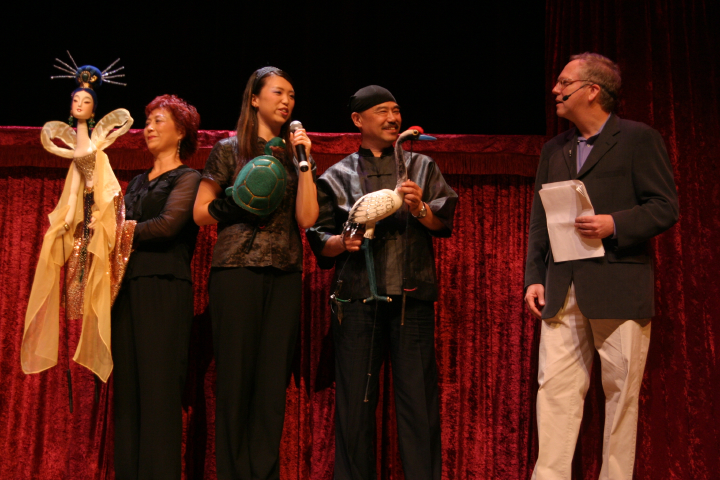 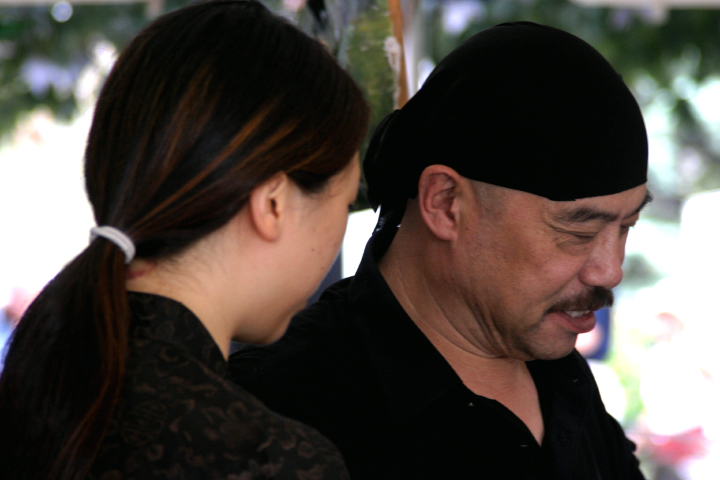 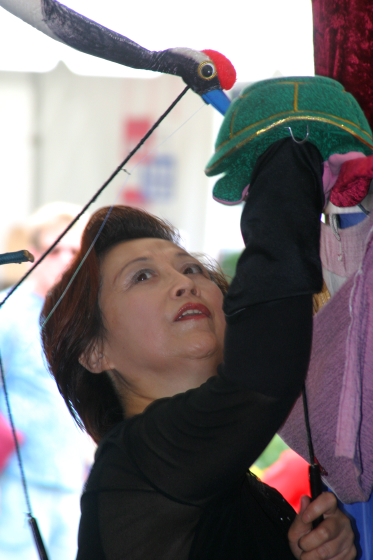 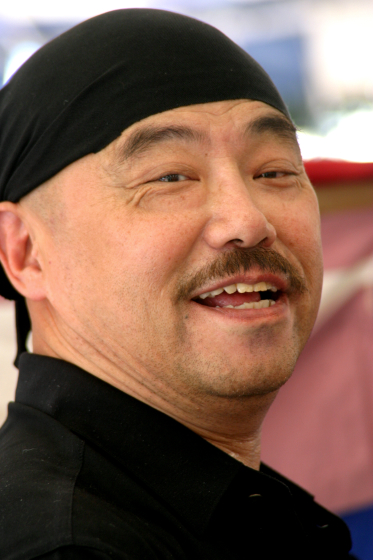 Husband-and-wife puppeteers Zhengli Xu and Yuqin Wang both began studying the performing arts while growing up in China. Wang's father was a Beijing Opera performer, and she began studying at the Beijing Opera School when she was 10 years old. In seven years there, she learned acrobatics, mime, martial arts, singing, history, and acting. In 1964, the director of the Puppet Art Troupe of China asked her to join his theater, and she began to study rod puppetry. In this ancient form, the puppeteers must hold large, heavy puppets overhead, manipulating their movable parts with long rods. Some puppets require more than one puppeteer. Wang and Xu learned with ten-pound wooden puppets; the newer papier-mâché models weigh one to five pounds. Wang performed extensively abroad during her thirty-one years with the puppet troupe.

As a child, Zhengli Xu, nicknamed "Rocky," staged puppet shows for neighborhood kids and joined school puppet clubs. Like his wife, he was trained by the Puppet Art Troupe of China. He also traveled to villages to learn directly from masters of rod puppetry. At that time, the Communist government had banned the traditional stories he had learned, many of which were fables with a moral message. After the ban was relaxed, the company added some of these tales to its repertoire, and Xu became a respected director.

The couple came to the United States in the mid-1990s and settled in Portland, Ore., where for two years Wang worked with a local professional puppet company as a teacher and performer. She also was a master artist in the Oregon Folklife Program’s Traditional Arts Apprenticeship Program from 1997-99. They became permanent U.S. residents in 1999 and have continued to teach and perform, mostly around the Northwest.

Xu and Wang work as a team, planning and performing the shows. He does much of the behind-the-scenes work, said the couple’s daughter, Ke “Brenda” Xu, who performs with them and translated for an interview with the NEA’s Mary Eckstein: “He's not only making the puppets but also directs, builds the sets, and makes all the music.”

The family also brings the art form to schools. “We teach the students to make a simple puppet,” Brenda Xu said. “My parents also work together with the local puppet company teaching them to work with traditional Chinese rod puppets.

“It’s very hard to make a puppet come alive,” Brenda Xu said. “It comes alive through movement, and since my mom trained as a Beijing Opera singer, she knows how to perform as a real actor. She’s learned to transfer her skills to the puppets, so that the puppets move as people. When they perform, they become the characters.”

Her parents, Xu said, “say the traditional art doesn’t belong to only one country. It is the treasure of the whole world. They want not only Chinese people to know this traditional art but people all around the world, to let more people know about the Chinese culture, the history and the puppet art.”

Yuqin Wang and Zhengli Xu's daughter, Brenda Xu, translates the answer to the question 'What meaning do Chinese puppets have?' Arlington, Virginia, 2003, interview by Alan Govenar

Yuqin Wang and Zhengli Xu's daughter, Brenda Xu, translates the answer to the question 'What are your puppets made of?' Washington, D.C., 2003, interview by Alan Govenar

Yuqin Wang and Zhengli Xu's daughter, Brenda Xu, translates the answer to the question 'Who are the puppets shows performed for?' Washington, D.C., 2003, interview by Alan Govenar

Yuqin Wang and Zhengli Xu's daughter, Brenda Xu, translates the answer to the question 'How has your time in America been?' Arlington, Virginia, 2003, interview by Alan Govenar