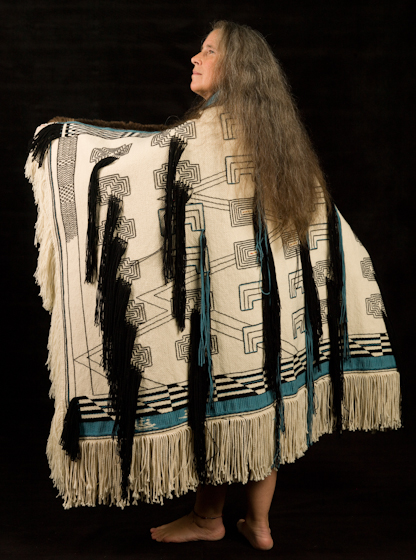 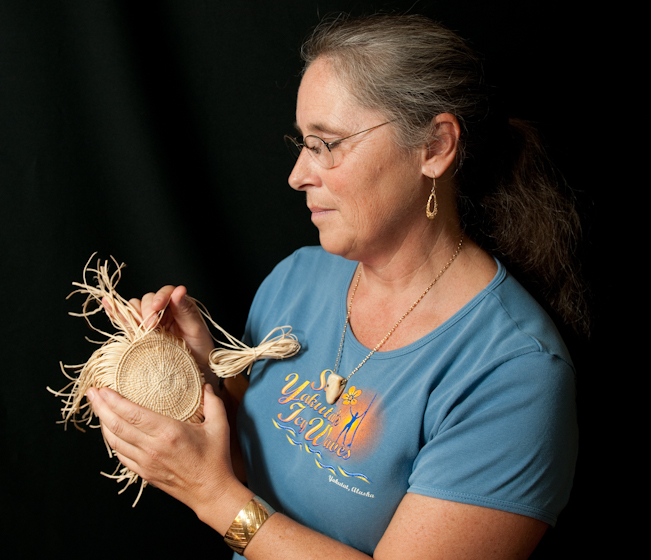 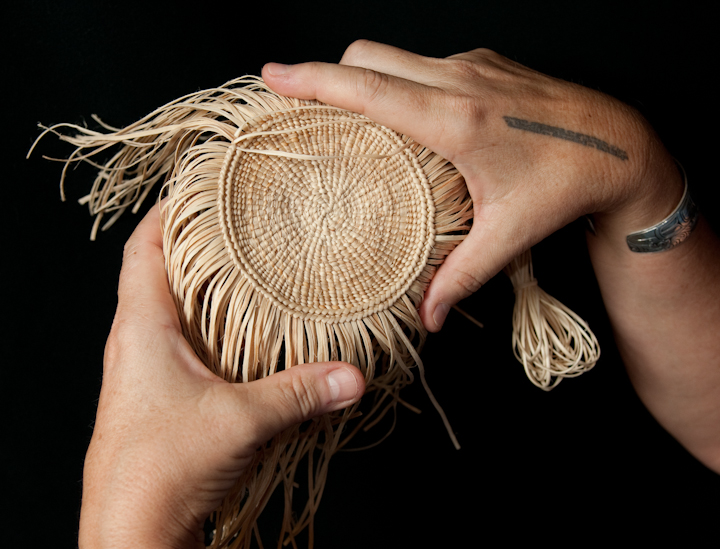 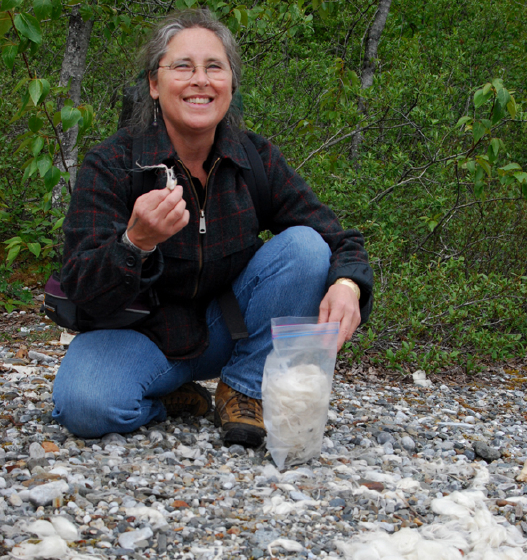 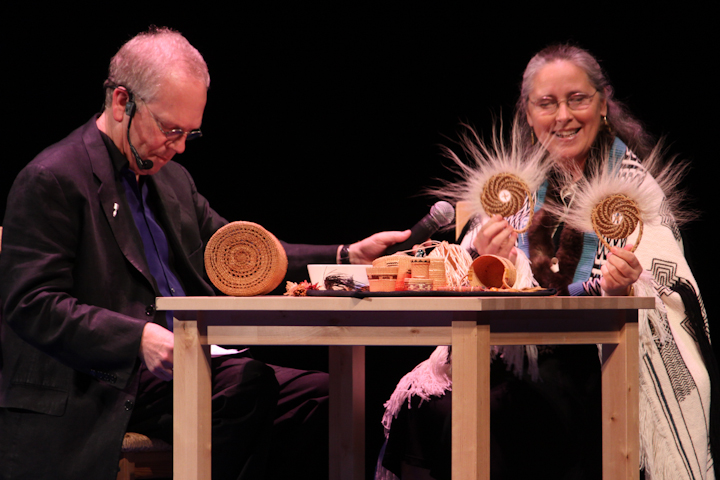 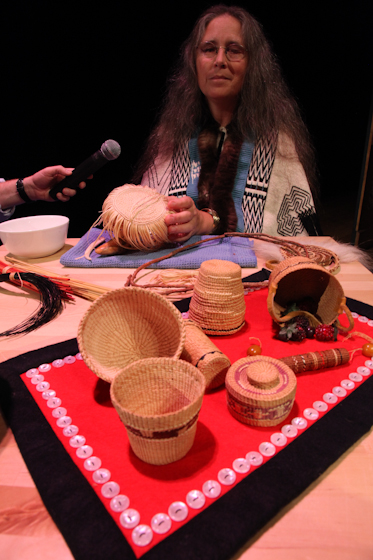 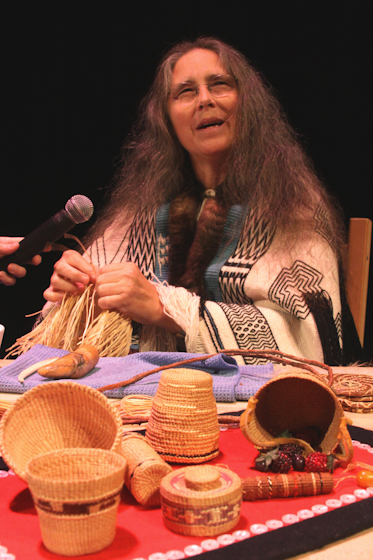 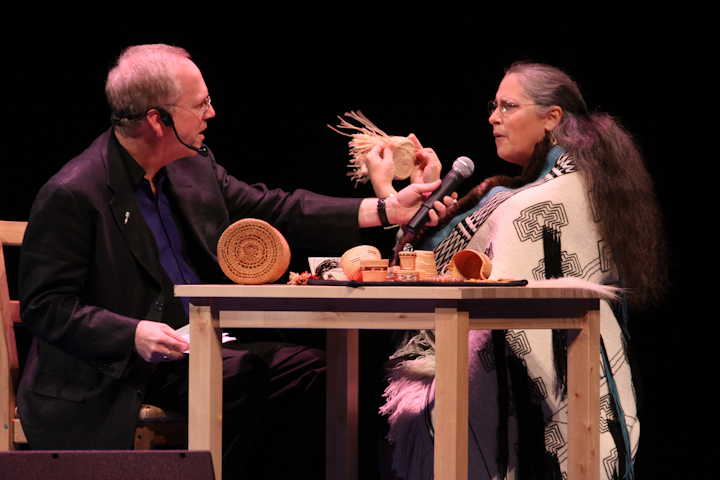 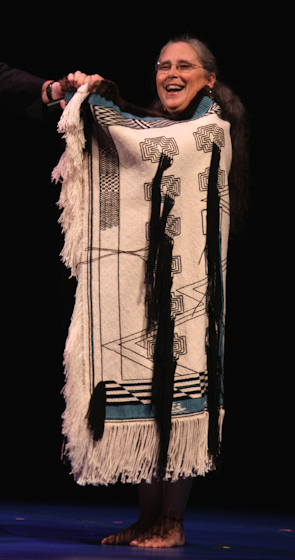 When Teri Rofkar was a child in San Rafael, California, her maternal grandmother introduced her to traditional methods of weaving while Rofkar’s parents were away on commercial fishing trips. She was inspired by the obvious joy the older woman took in practicing the craft but didn’t become involved in it until she was about 30 years old. About 1986, she said, “I sat my husband down and said, ‘Honey, oh, my gosh, I know what I’m going to be when I grow up. I’ve a weaver.’ You know, Grandma said we were weavers. … It’s the family business. We were weavers and whalers, and she was trying to impart as much knowledge as she could while she was still alive.” Rofkar studied with other weavers and within a few years had sold some of her work.

Rofkar, whose Tlingit name is Chas’ Koowu Tia’a, is a member of the Raven Clan. Every spring, she spends hundreds of hours in the woods gathering spruce roots to weave into baskets. Within a couple of hours after digging the roots, she roasts them in a large fire. She peels the bark off and splits the roots, then puts them aside until it's time to weave, usually in the winter. The process involves hard work, eight to ten hours of preparation for each hour spent digging, but Rofkar loves what she calls the “tactile richness” of gathering and preparation. Making the baskets is also hard, exacting work; each requires about 200 hours. The pattern of a maidenhair fern is sometimes woven into the basket. The fern is used to provide a brown color, and its root is actually incorporated into the basket.

Using the same designs employed in her intricately beautiful baskets, Rofkar weaves her clan’s traditional Raven’s Tail robes from the wool of mountain goats. Dark brown and a yellow that’s close to chartreuse are added with the use of hemlock bark and wolf moss, a lichen that grows in trees. She spends six months to spin the wool and 800 to 1,400 hours to weave the robe on a frame.

In 2003, Rofkar won a Smithsonian visiting scholar award. She spent three weeks on the East Coast photographing and studying traditional robes and baskets in museums. “I was never the same after that,” she said. “And there was something wonderful about just spending that time and recognizing what they had to share and also that I was actively engaged in keeping their legacy alive.” In 2006, she was among the first to receive the $50,000 United States Artists Rasmuson Fellowship. Her contributions to sharing her legacy have included participation in a master apprenticeship program of the Alaska State Council on the Arts. Her apprentices include her daughter.

Rofkar is encouraged at the interest in traditional crafts but feels that museum displays rob objects of their context. The robes she creates, for example, were worn by dancers and seemed to come to life as their tassels flew. If a museum made a robe available to dance groups, she said, “it would be actively involved in a culture and the museum would actively be involved in that culture as well. I think somehow we need to broaden our viewpoint.”

Teri Rofkar answers the question 'How did you get started making baskets?' Interview by Alan Govenar, Bethesda, Maryland, September 22, 2009

Teri Rofkar answers the question 'What kind of baskets do you make?' Interview by Alan Govenar, Bethesda, Maryland, September 22, 2009