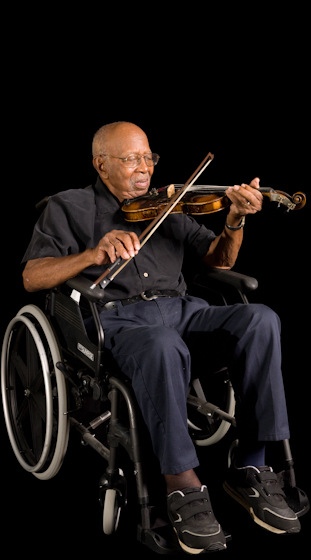 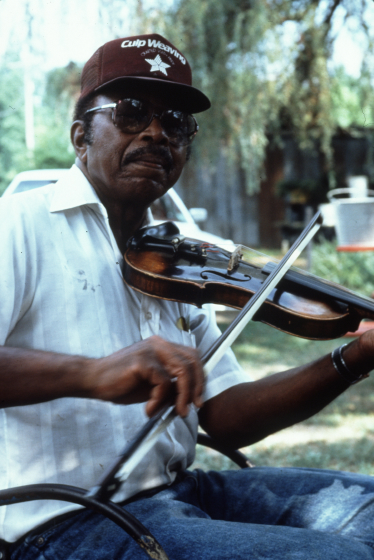 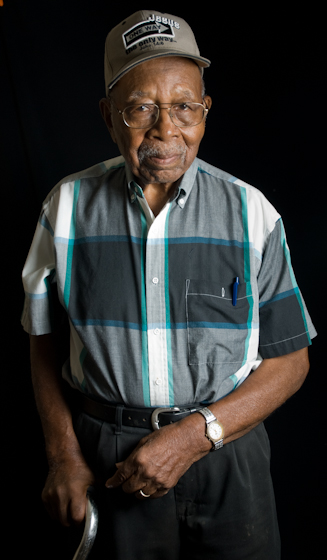 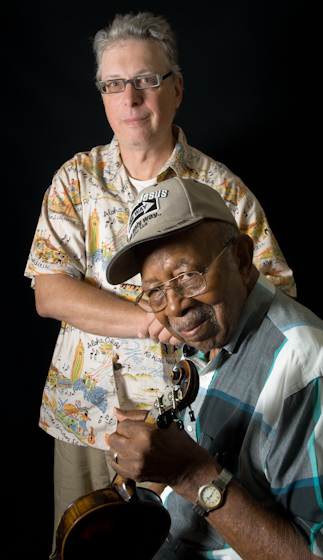 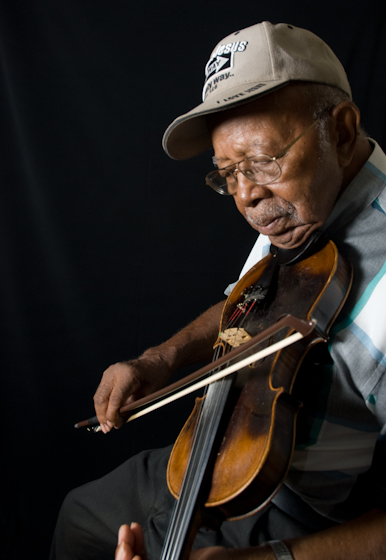 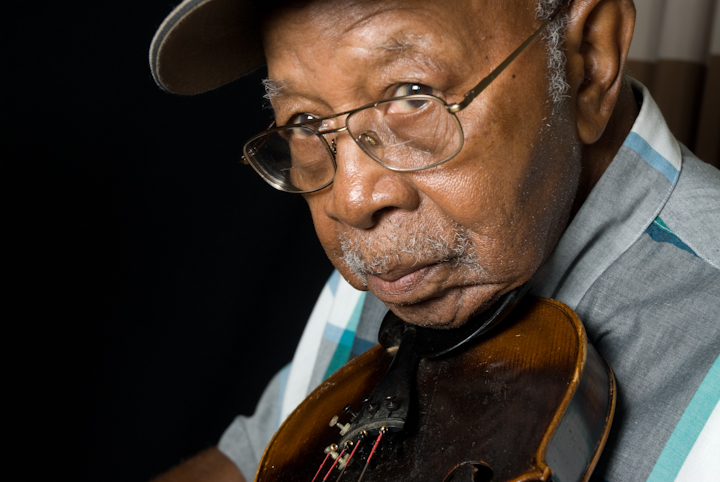 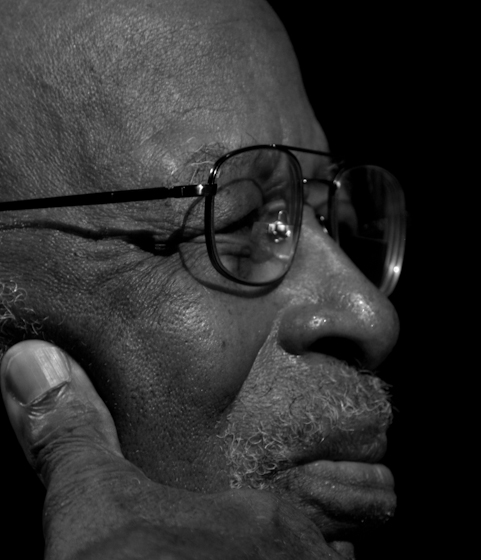 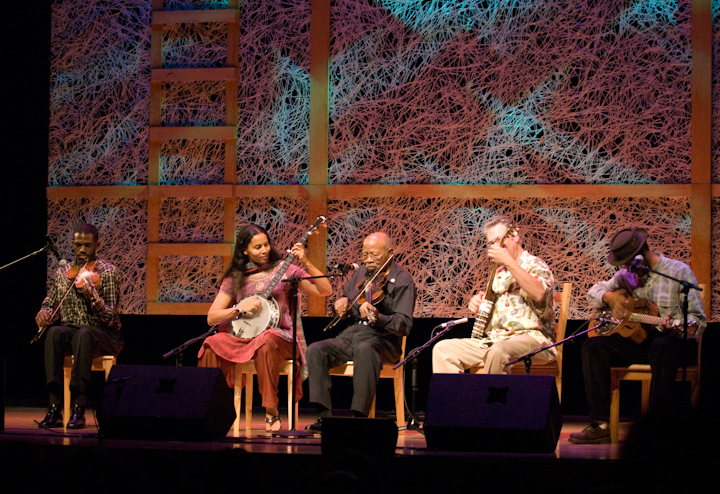 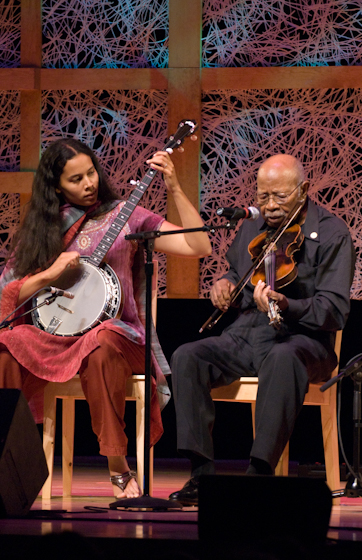 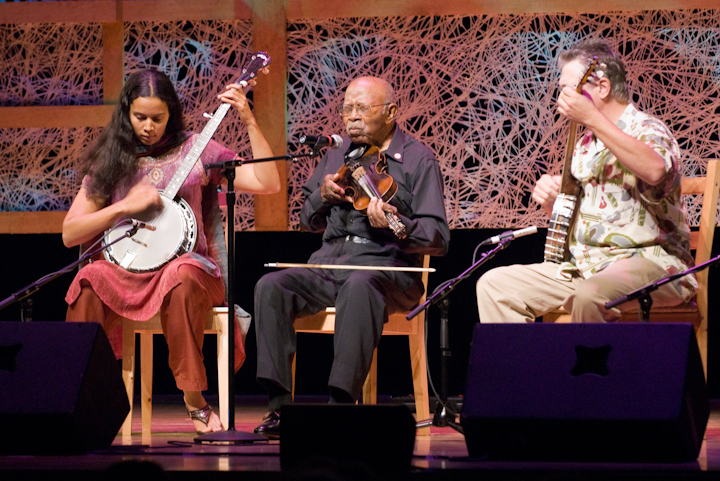 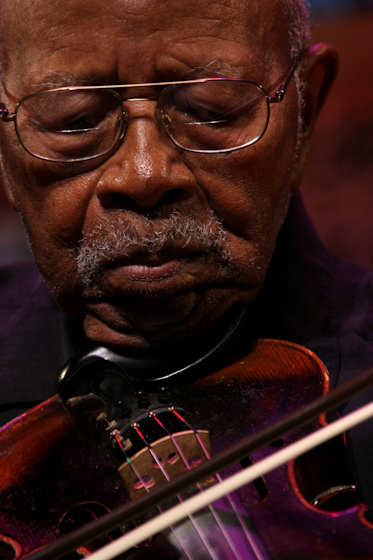 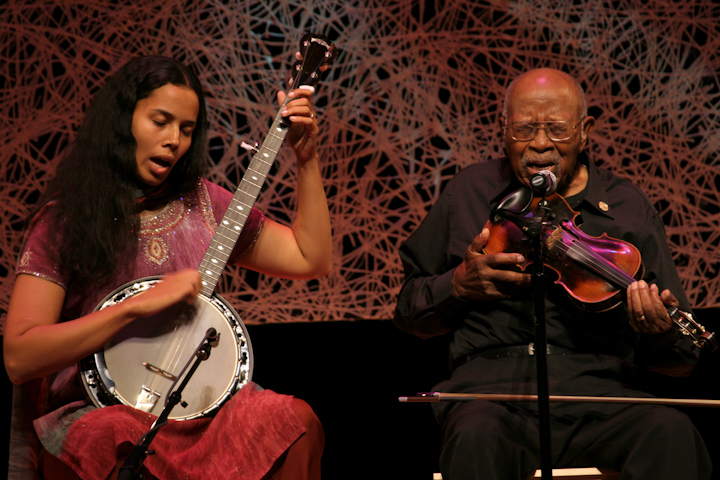 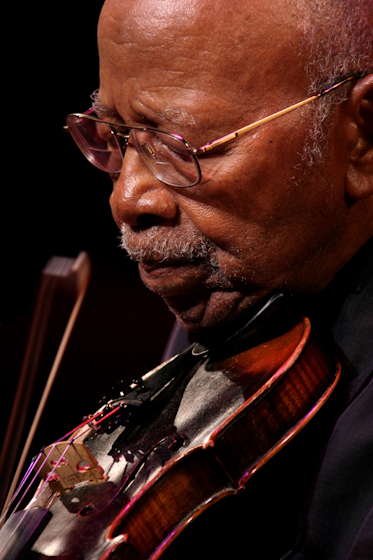 Joe Thompson grew up in Cedar Grove, in the Piedmont region of North Carolina. His father, John Arch Thompson, and his father’s brother, Walter, played for local dancers, both black and white. Soon after taking up the fiddle, Joe Thompson began playing local house parties in a band with his brother Nate and their cousin Odell.

Music “was in the family so strong,” Thompson told NEA interviewer Mary Eckstein. “All of us did it, my brothers, the cousins and all of them did it. We grew up in it. I learned how to play the music from my father. He was a great musician, as were his brothers. My older brother learned when he got big enough — he was playing the banjo, so I took on the fiddle. I really enjoyed calling sets. We used to call sets and to have a dance. We'd get eight boys and girls together to have a dance and call a set. Whenever we had a corn shucking, a big corn shucking, we would have a dance. And Christmastime, we would have a dance every night somewhere, square dance, corner single, stuff like that. All would dance through the night. It was nice. I enjoyed it. It was a good thing for the young folks in the family. I did all of that until I got grown.” The square dance calls he learned as a boy remained a distinctive element of his music.

After service World War II, with interest in traditional music waning, Joe Thompson quit playing and worked in a furniture factory for thirty-eight years. He resumed playing in the 1970s with the encouragement of folklorist Kip Lornell, then a college student. Thompson and his cousin Odell, a clawhammer banjo player, performed as the New String Band Duo both at home and abroad, playing such prestigious venues as Carnegie Hall and the National Folk Festival. They won the North Carolina Folk Heritage Award in 1991. Their music was featured in Alan Lomax’s American Patchwork film series. When Odell Thompson died in 1994, Joe Thompson considered giving up music again but continued playing with younger musicians such as Bob Carlin, a clawhammer banjoist from Virginia. In 1999, Rounder Records released Joe Thompson: Family Tradition focusing exclusively on his unique musical repertoire.

Thompson lamented the lack of interest in the old music and dances among young people. But he found protégés in the Carolina Chocolate Drops, an African American string band. “I was glad to come in contact with somebody that was doing it,” Thompson told Eckstein. “I think they got it pretty good. They caught on so good. Everything I did, they're doing.” At an age when many people are content to take it easy, Thompson still got out and played, even when he was tempted to stay home. “It’s the love of the music,” he told Eckstein. “I’ve been able to play the music. Somehow or another, I got ahold of that pretty good, I think. Because I go every which way with it. And I go so many places, get so many calls. I certainly have traveled a lot. But I enjoyed it. I enjoyed pretty good myself. Yes, ma’am.”

Joe Thompson answers the question 'How did you get started playing music?' Interview by Alan Govenar, Bethesda Maryland, September 19, 2007

Joe Thompson answers the question 'What do you like about the fiddle?' Interview by Alan Govenar, Bethesda Maryland, September 19, 2007