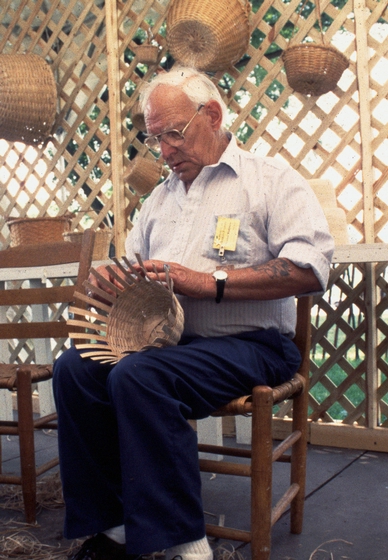 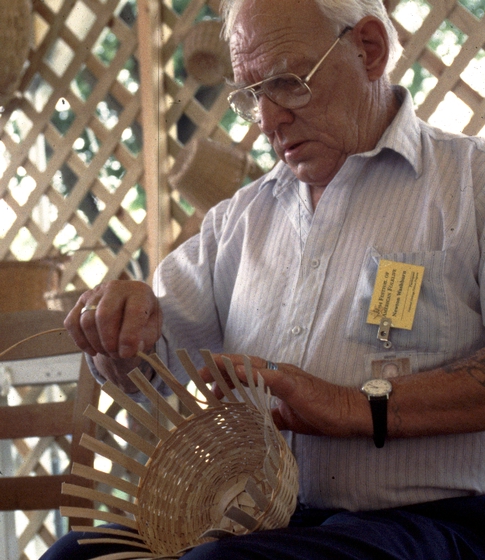 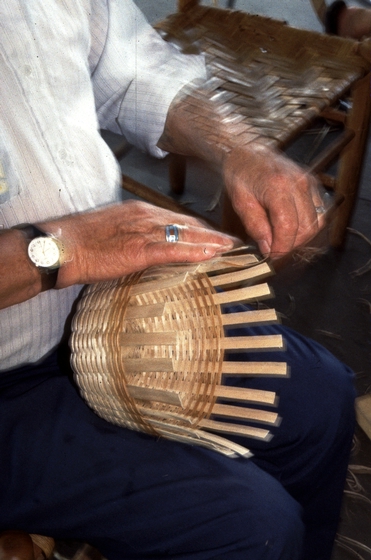 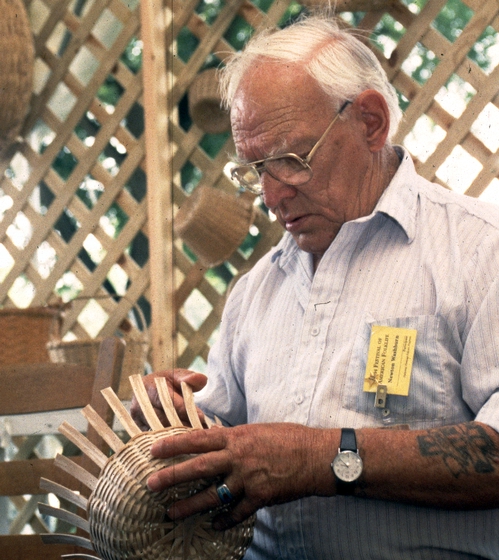 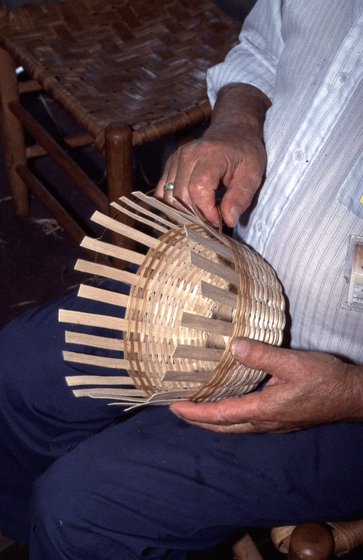 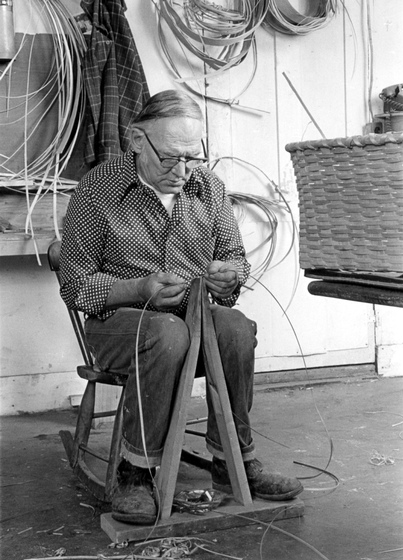 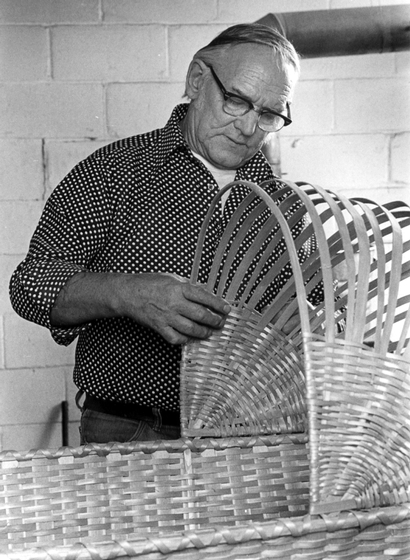 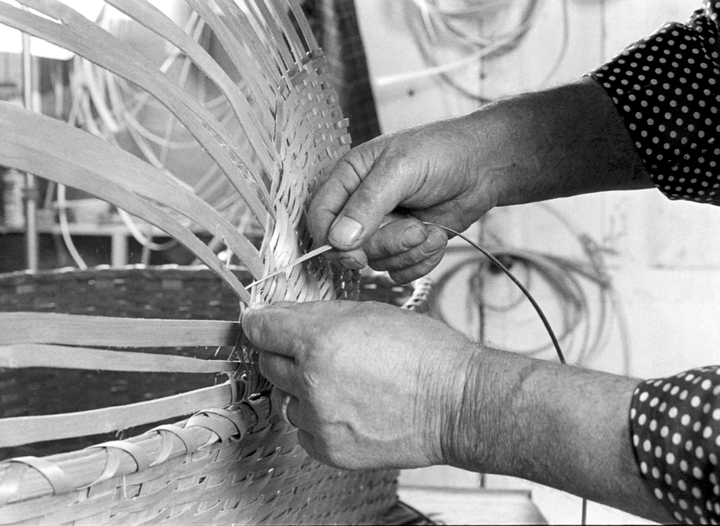 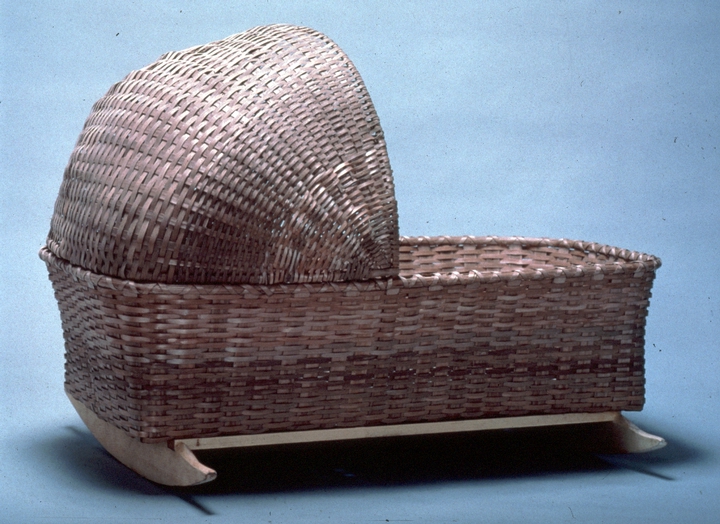 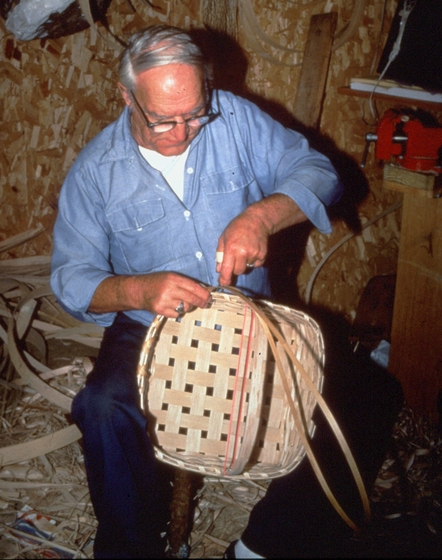 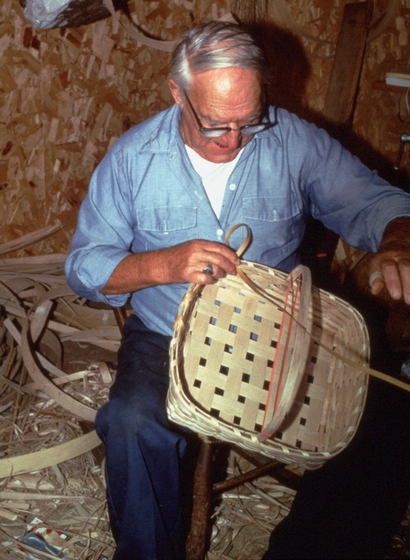 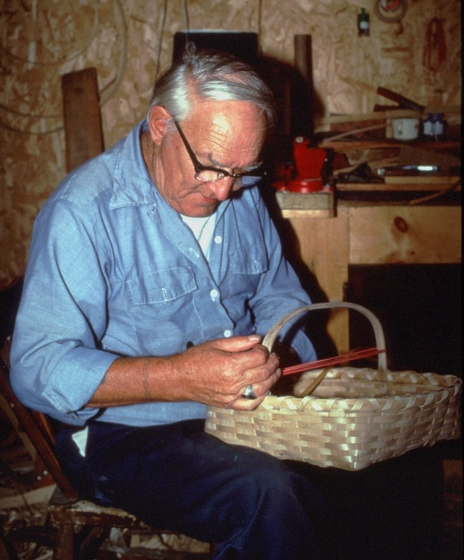 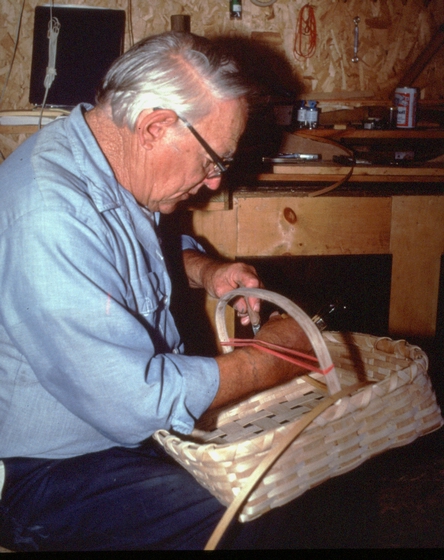 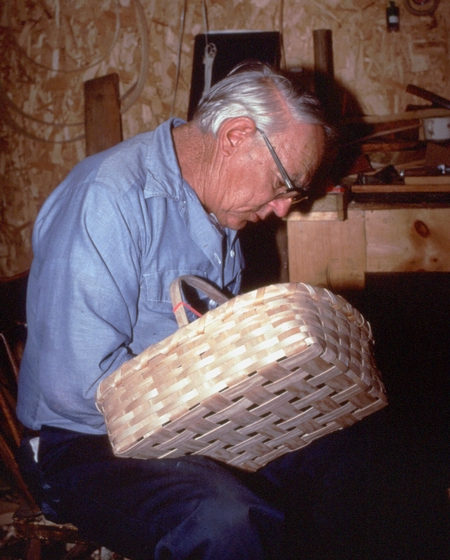 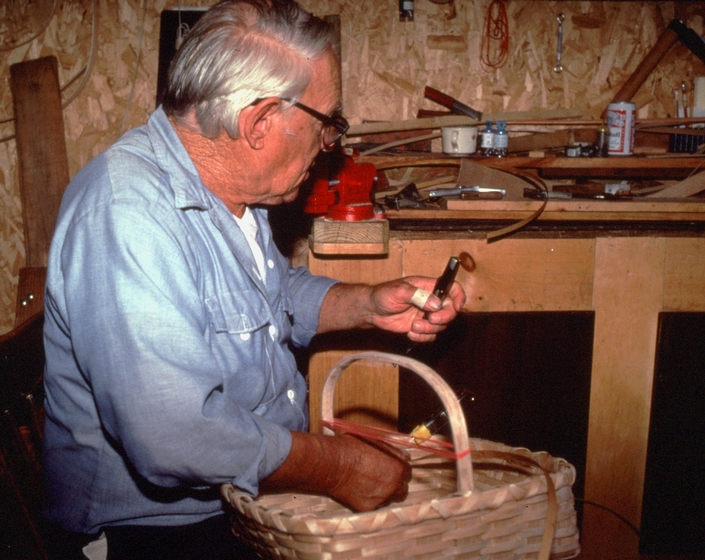 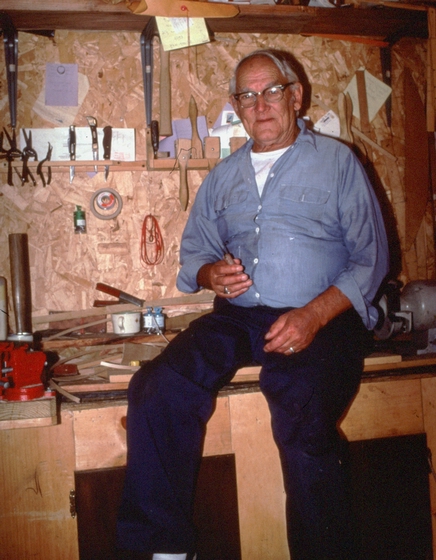 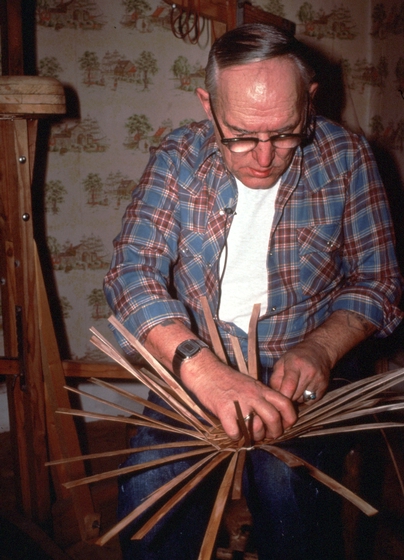 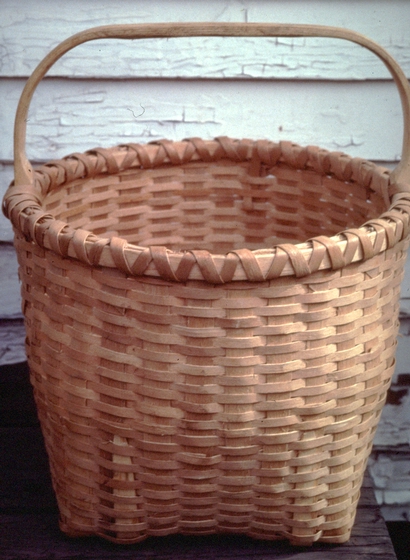 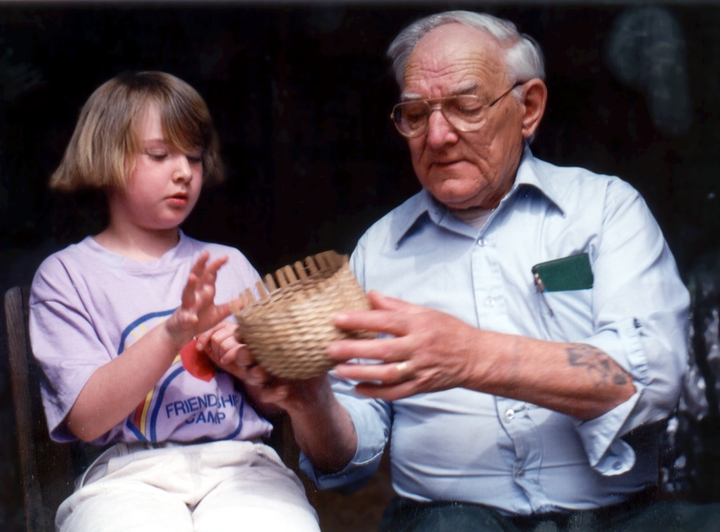 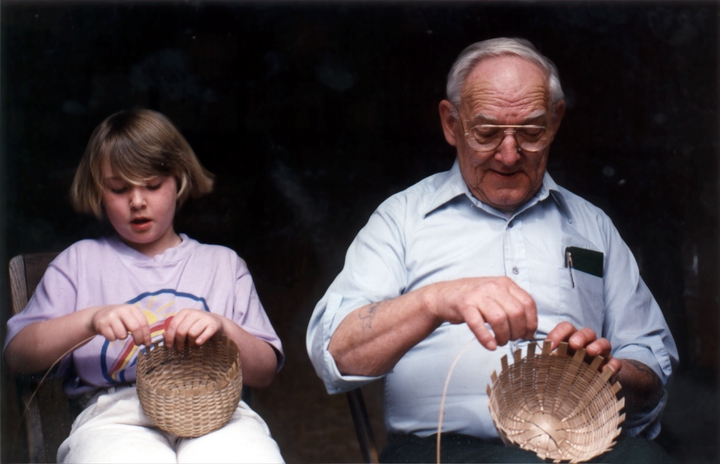 Newton Washburn, a native of Stowe, Vermont, was the grandson of Gilman Sweetser. The Sweetsers have been known for their brown ash split baskets since at least 1850. Reportedly, the original Sweetser came to Vermont from Switzerland in the late eighteenth century and his son married Lydia Hill, of the Abenaki Indian tribe.

When Washburn was about 8 years old, he began to learn to make baskets. "Dad showed us how to get it off the log.... Then it was up to Mother.... Mother started me out with a flat-bottom [basket]. Then we went to round baskets. Each one, you had to do till it was right. The first one you did was right because if it wasn't, you took it apart and started over again. There was never nothing said about how many you made.... It was quality, not quantity. She'd tell me, 'Make it right, or make it over.'"

The brown ash tree is usually found in swampy areas. The tree is felled and cut into logs; these are then pounded to loosen the layers — each layer representing a year's growth. Cutting down the tree and removing the strips was usually the man's job. This was followed by the process of preparing the basket materials — shaving and shaping the ash, setting up the bottom, putting in the hooping, and then making the handle.

By the age of 9, Washburn was able to make a good basket, as were his cousins. At one time, there were seventeen branches of the family making baskets, and they often assembled for a basketmaking party. However, basketmaking was never taught to anyone outside of the family. The basketmaking season started around the first of November and continued through the winter months, although they often came together for at least a week in the summer. "A typical day would be a circus," Washburn said. "When we had a big gathering, the kids didn't make baskets. That was for grownups. That was their entertainment." Sometimes family members played banjo or fiddle and the children danced, while others played cards.

Until the 1930s, Sweetser baskets were used by working farmers, but with the advent of readily available galvanized containers, the demand for baskets declined. Prices dropped, and the older generation eventually stopped making baskets for such little pay.

During World War II, many Sweetsers served in the armed forces, and after the war some family members moved away from Vermont. When Washburn returned from the war, he got a job at an auto body shop, where he worked for the next twenty years. He set aside his basketmaking until two heart attacks forced him to slow down. During his recovery, he decided to make his wife a laundry basket, then two sewing baskets.

Before long, his friends and family were asking for more. He wanted to make the traditional peck basket he had learned when he was growing up, but he realized that he had forgotten the dimensions. "Then," he recalled, "[that night] about three o'clock in the morning I woke and I said, 'I know what the length of those peck basket uprights are, and the width.' And I got right up then. I come right down and made one. I let it set a couple of days, and I tightened it down and put the hooping handle on. And said, 'Whether it's a peck or not, it's a pretty basket.' So my wife had a bag of potatoes, and we set it on the bathroom scale and filled just level full, just fifteen pounds. It was perfect. So then I knew what the half-bushel and the bushel was. And so I made one of each, and they were perfect."

As the last Sweetser basketmaker, Washburn was in a unique position. Many of the people who bought his baskets were eager to learn to make them, but at first he didn't want to violate the tradition of never teaching basketmaking outside of the family. Not sure how to proceed, he went to his aunt and asked her for advice. "Am I going to let it drop or teach it?" "Well," she said, "we never did." "I know it. If someone doesn't, the art is going to go." "Well," she said, "use your own judgment." Gradually, Washburn accepted young people who wanted to work with them, and over the years he taught more than eighty apprentices.