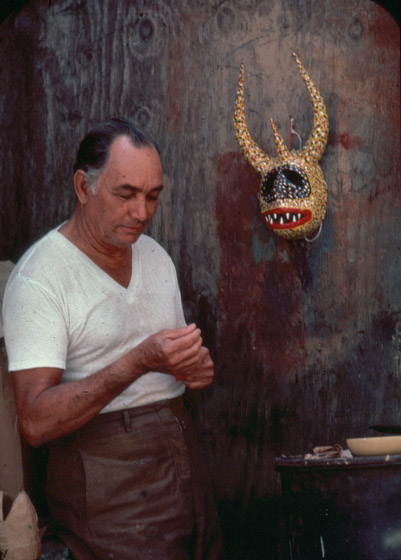 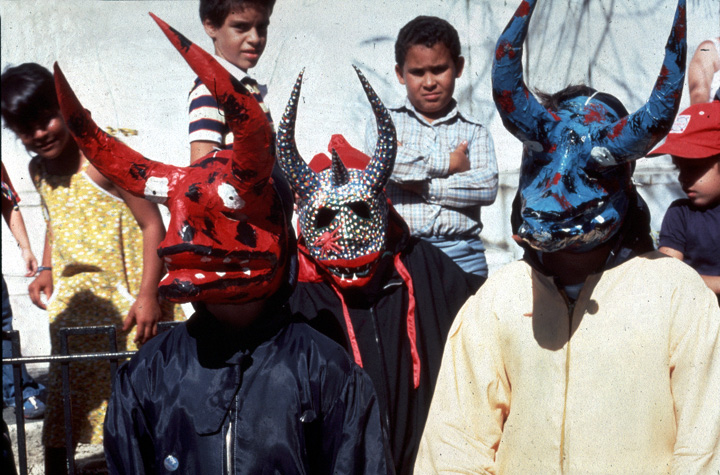 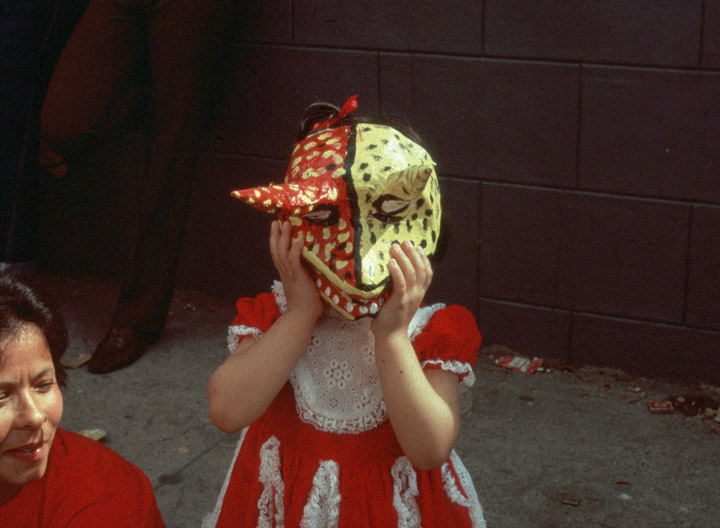 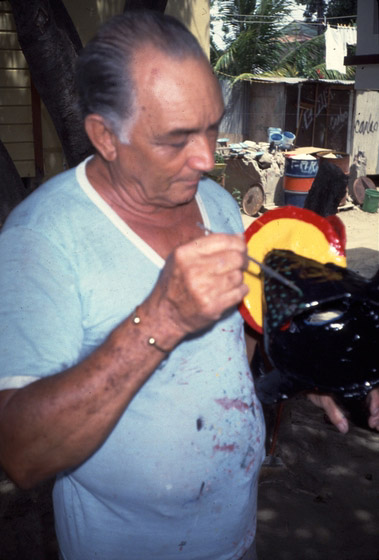 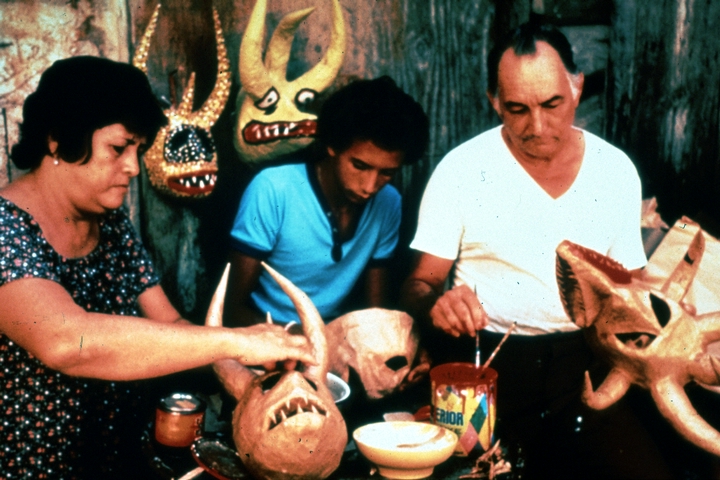 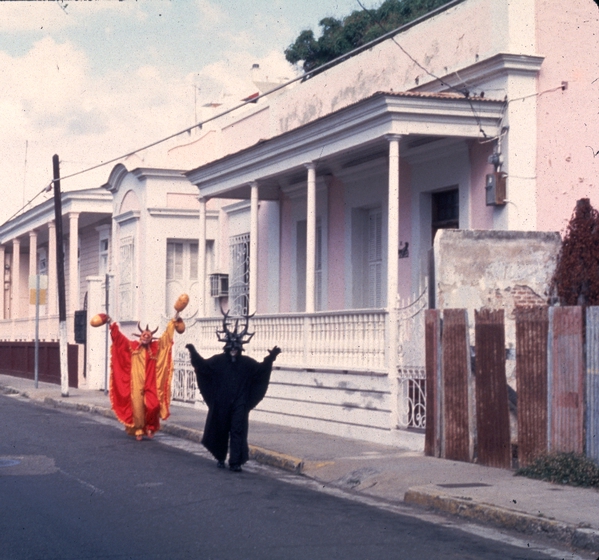 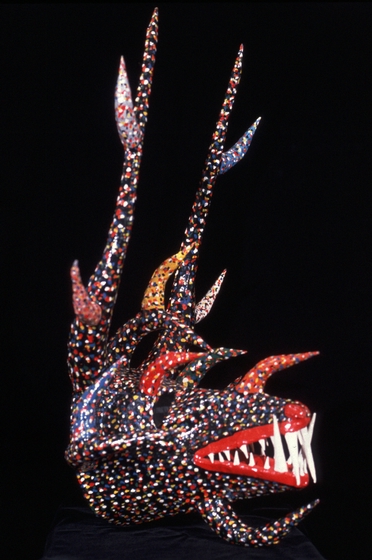 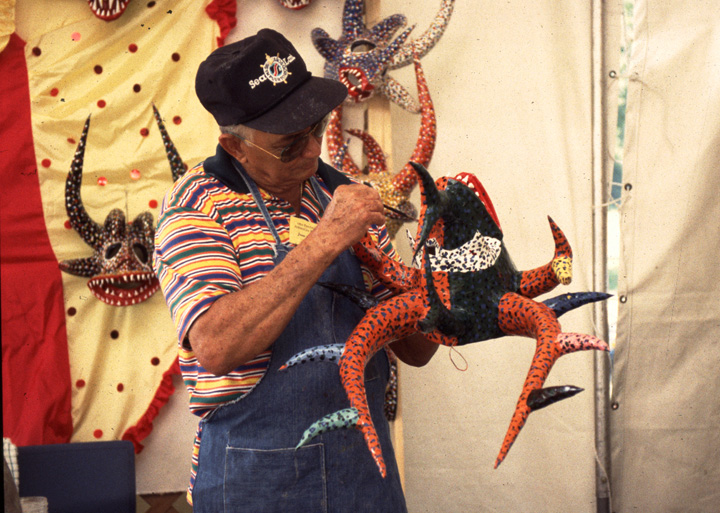 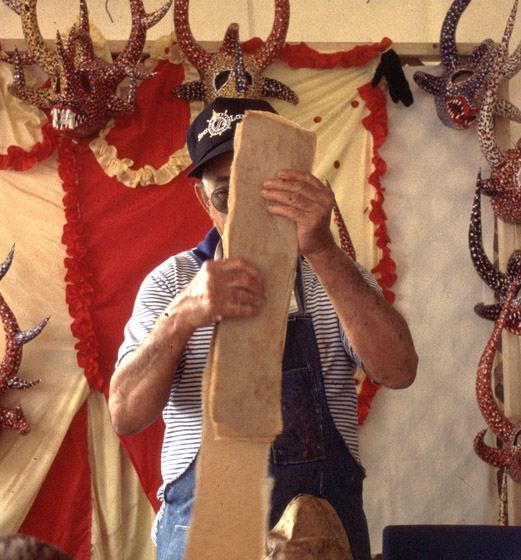 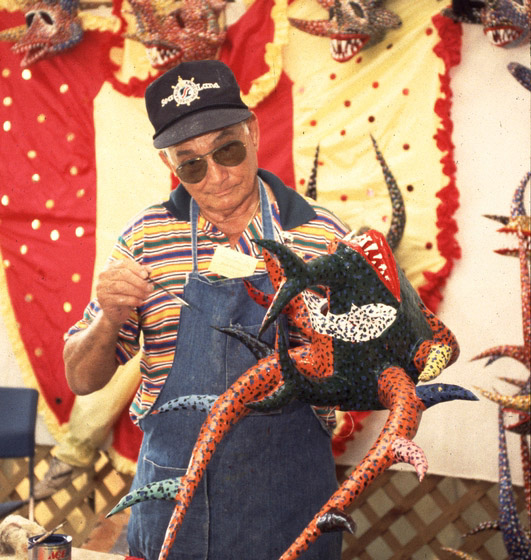 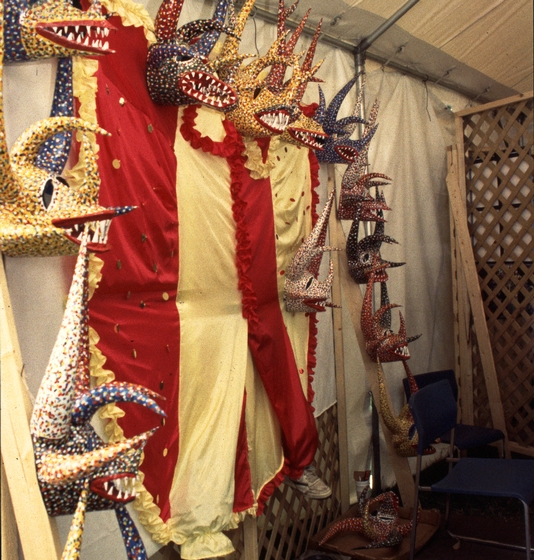 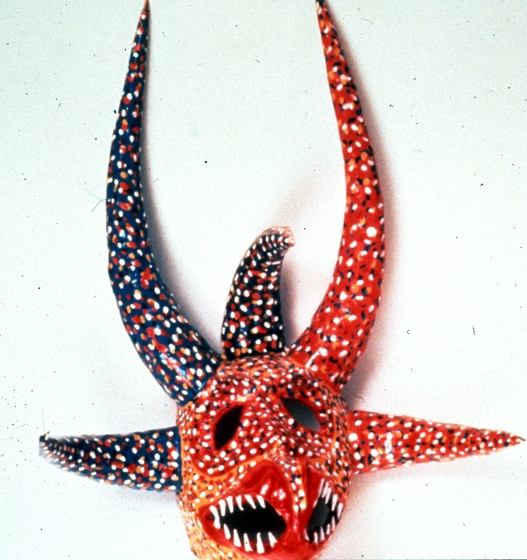 Juan Alindato grew up in Playa de Ponce, Puerto Rico, the son of Filipino immigrants. He began making masks in the early 1950s during his courtship of Isabel Salvador Bonet, also of Filipino heritage. Alindato watched with interest as her mother made the traditional papier-mâché masks so popular among the townspeople at carnaval time. As he watched, however, he realized that arthritis was making her work increasingly difficult. Alindato, already a craftsman who had worked on the docks for most of his life, offered to help. He promised to construct the big masks that her neighbors wanted. He turned all his profits over to her. "It was a labor of love," he said. "There was never much money in it."

Masks were nothing new to Alindato. Every year at carnaval in his hometown of Ponce, masked figures known as vejigantes wandered the streets, sending young children fleeing, screaming with fear and delight. Vejigantes date to at least the mid-eighteenth century in Puerto Rico. They take their name from the Spanish word vejiga, or bladder, because they carry inflated cow bladders on small sticks, striking those who dare to get near them. This light blow causes no physical harm but has great psychic effect.

More terrifying still are the masks themselves. In a style unique to Ponce and other parts of southern Puerto Rico, masks traditionally are made of papier-mâché and take the shape of horned, devil-like creatures. Some of the more elaborate masks, such as those made by Alindato, have elongated snouts with flaring nostrils, menacing teeth and many horns jutting from all sides. The mask maker attaches sheets of paper with a paste made of wheat flour and hot water until it is thick enough to dry firm. The paper is pasted on a mold of wood, cement, clay or plaster that serves as a base. The artisan then uses his imagination, adding horns of various sizes, teeth, hair and so forth. The horns are made with the same papier-mâché process used in creating the face of the mask, with a cattle horn as a mold. Oil paints are then applied in brilliant colors such as red, yellow, blue, green and black. These masks can startle adults as well as children.

Alindato is known both as an important bearer of tradition and as a master artist whose masks are sought by art collectors for their imposing beauty and fine workmanship. Dr. Ricardo Alegría, former director of the Institute of Puerto Rican Culture, included Alindato's masks in a documentary he produced on traditional Puerto Rican art. Alindato's work is also featured in a book by Puerto Rican folklorist Teodoro Vidal, Las Caretas de Cartón del Carnaval de Ponce (The Papier-Mâché Masks of the Carnival of Ponce). His work has been exhibited widely in Puerto Rico and the continental United States and abroad. Despite this widespread recognition, he remained dedicated to the day-to-day rigor of his work. He taught his wife, five children and grandchildren mask making, and his mask business became a family operation. After retiring as a dockworker in the 1980s, Alindato was able to spend even more time creating his prized máscaras de cartón (masks) and sharing his skills with family and others in his community.