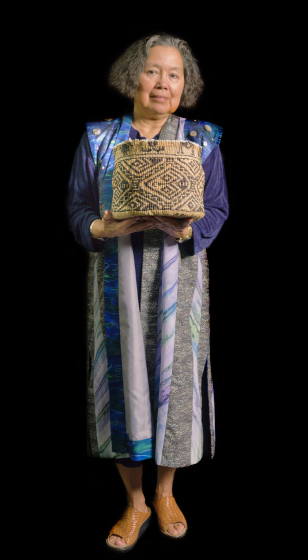 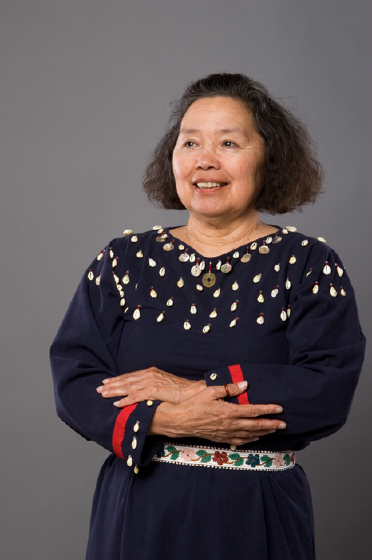 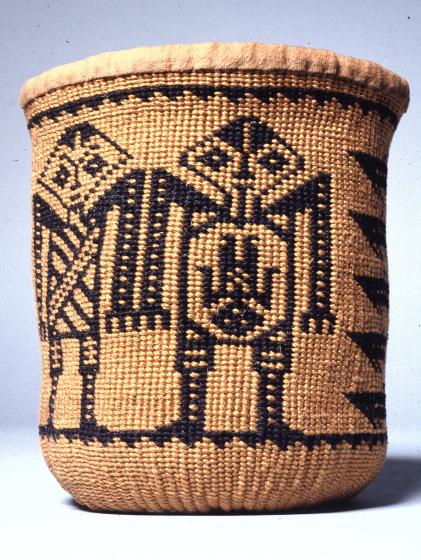 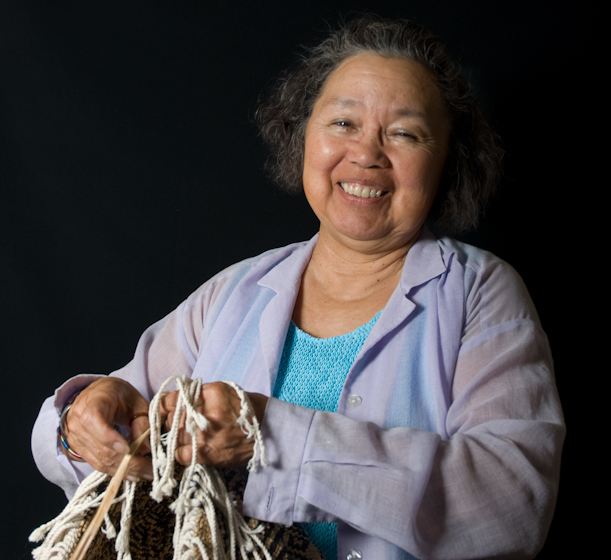 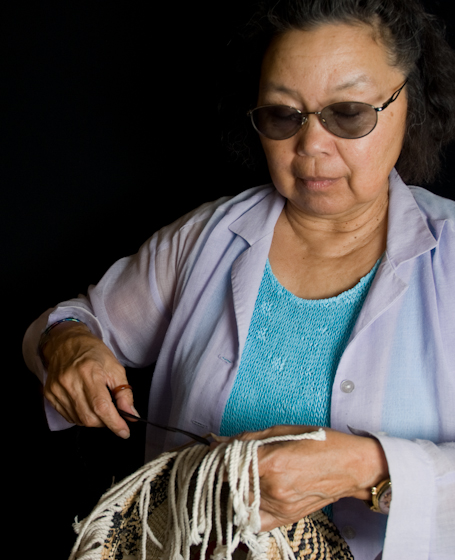 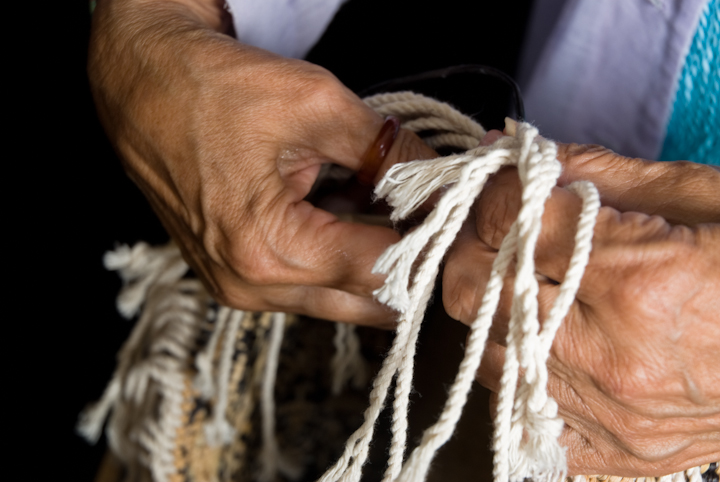 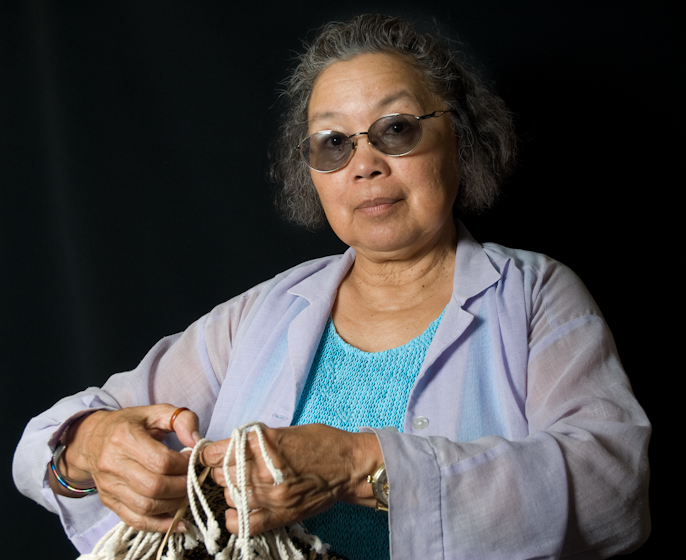 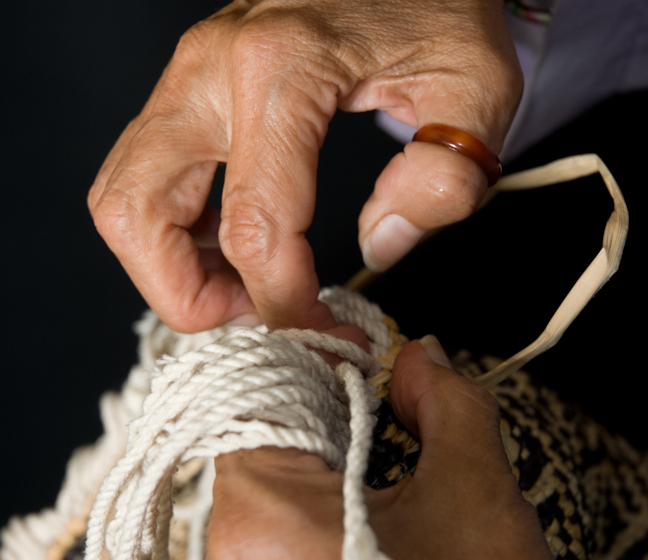 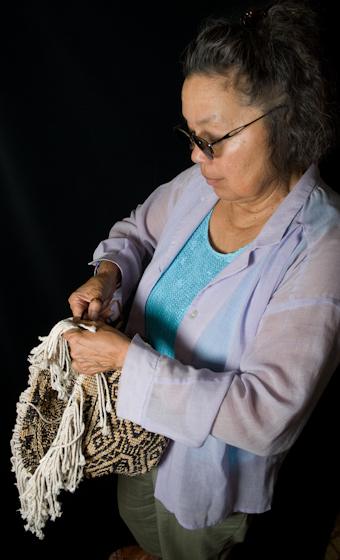 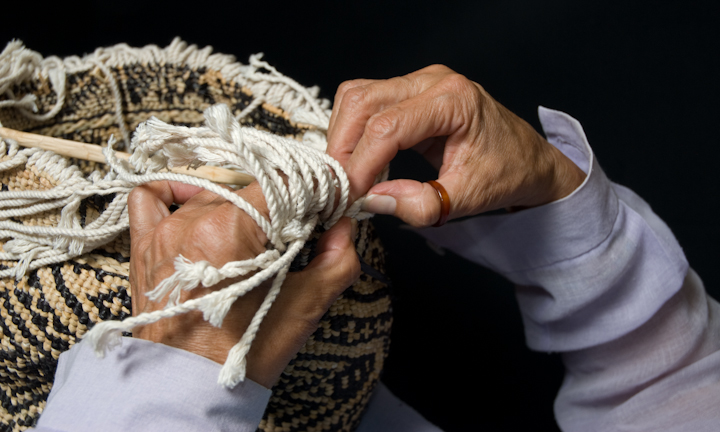 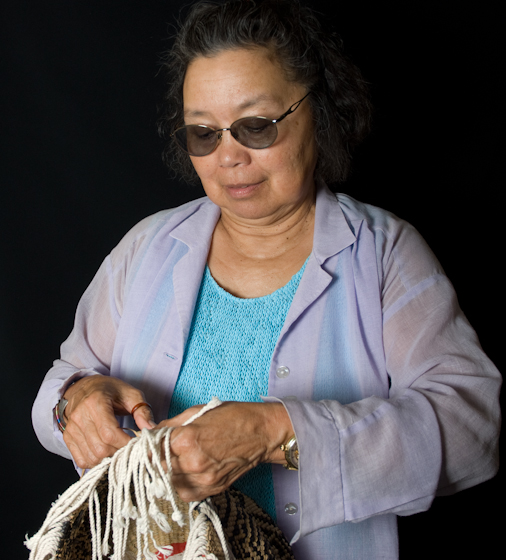 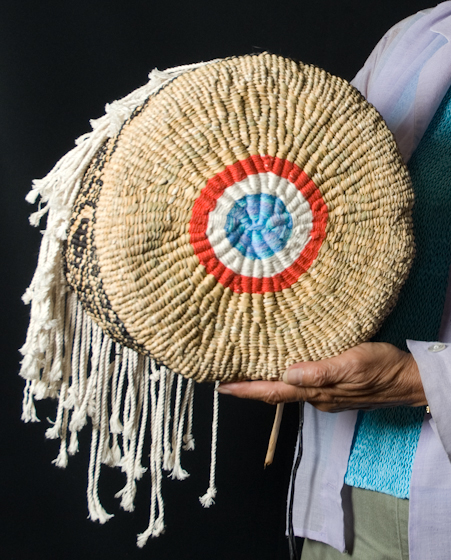 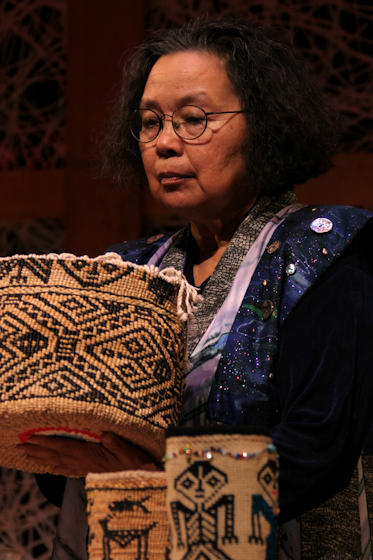 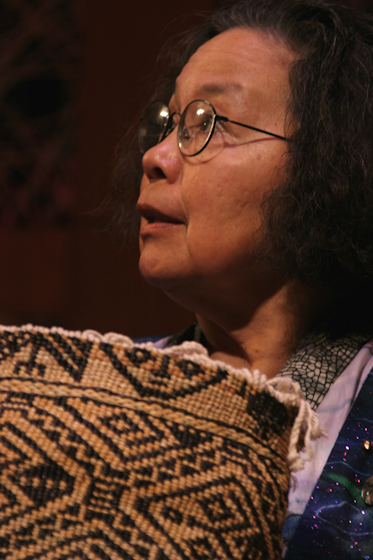 When Pat Courtney Gold was growing up on the Warm Springs Reservation in the mid-Columbia River area of central Oregon, her family sometimes visited the Maryhill Museum in Goldendale, Washington. Her mother would point out the Wasco baskets and say with pride, “Our ancestors made these.”

“They were the ones with those beautiful geometric designs,” Gold told NEA interviewer Mary Eckstein. “She was always so proud when she pointed these out. I remember how beautiful those baskets were because no one in our immediate family had made those baskets. It was a very impressive memory.”

Gold was educated in a Bureau of Indian Affairs boarding school, where her Native heritage was downplayed. After earning a degree from Whitman College, she became a mathematician and computer specialist.

In 1991, with the encouragement of her sister, who had earned a degree in fine arts, Gold began studying the making of Wasco sally bags, twined bags for root digging and storage, through the Oregon Traditional Arts Apprenticeship Program. This launched her on a new career path dedicated to the preservation of her cultural heritage. “As I began focusing more on my weaving, I also became aware that the technical technique was only a small facet of what I was doing,” she told Eckstein. “The other component was that I was dealing with a whole ancestral heritage. I felt as though the ancestors were waiting for somebody like me to come forward and that all this energy was being focused and funneled through me.”

Gold’s background in math came in handy, she told The Oregonian in a 2007 interview. “I did a lot of mathematical visualizing for my job,” Gold said. “I’d visualize water flow moving over a spillway, for example. When I started weaving, I graphed images on paper and then visualized what they would look like on a basket.”

Though she’s a tradition bearer, Gold hasn’t shied from adapting to the changes that began when her people were removed by treaty from their longtime homeland farther north on the Columbia River. She learned that basket weavers in the early nineteenth century traded for Hudson Bay blankets, which were primarily red and blue, and unraveled them to use the wool in their designs. A hundred years later, when many Native people harvested hops, hop twine turned up in their baskets.

“I created what I called a yuppie Indian couple,” Gold said. “The figures maintained the same geometric form of the traditional images, but I put the male figure in a blue suit and tie and a fedora hat. The woman was a professional woman wearing a tight dress, heels, lipstick and jewelry. And I used colorful chenille fiber for the texture. I enjoy creating my own designs.”

She also uses her art to make statements about current events and problems, such as weaving deformed sturgeon images, to highlight deformities in the Columbia River sturgeon caused by the federal Hanford nuclear plant. And she works with federal agencies to preserve the plants that weavers use for their baskets.

Gold became involved in weaving in part because she feared that the unique Wasco technique called full-turn twine would be lost. She teaches the craft to others and was instrumental in the mid-1990s in founding the Northwest Native American Basket Weavers Association, which had 585 members in 2014.

“In order for people to really understand and appreciate baskets, they have to know about the culture of the weaver,” Gold told Eckstein. “The baskets reflect the culture.”

Pat Courtney Gold talks about the significance of the pattern on the bottom of the basket she is making. Interview by Alan Govenar, Bethesda, Maryland, September 19, 2007

Pat Courtney Gold discusses the impact of her work on the culture of her tribe. Interview by Alan Govenar, Bethesda, Maryland, September 19, 2007