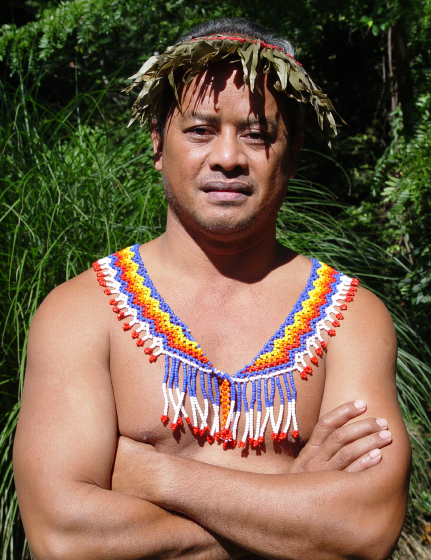 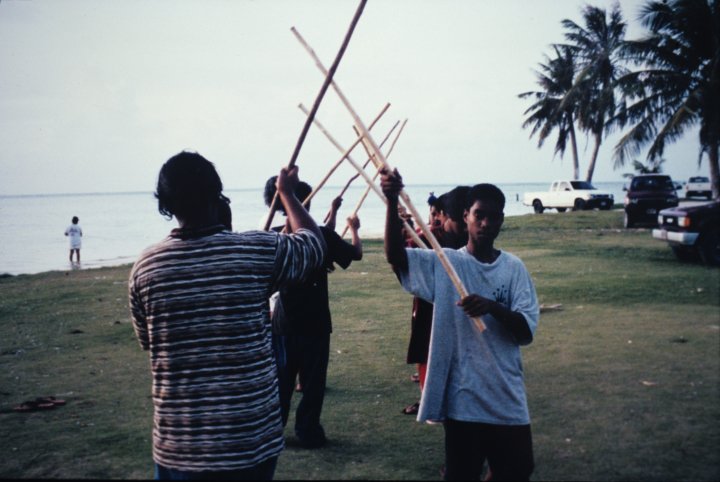 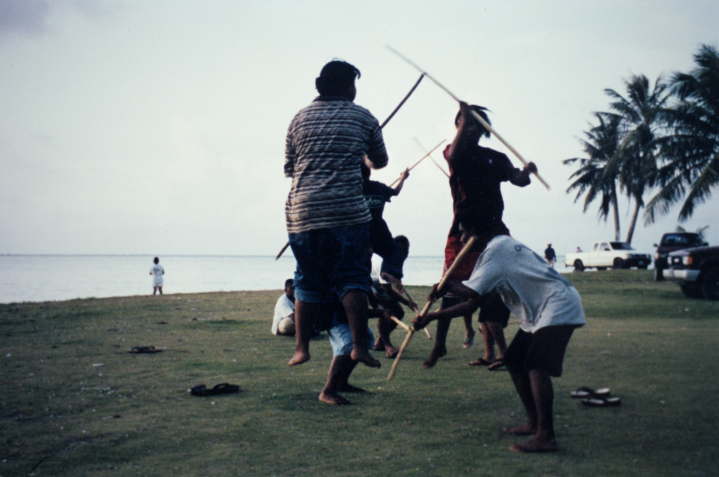 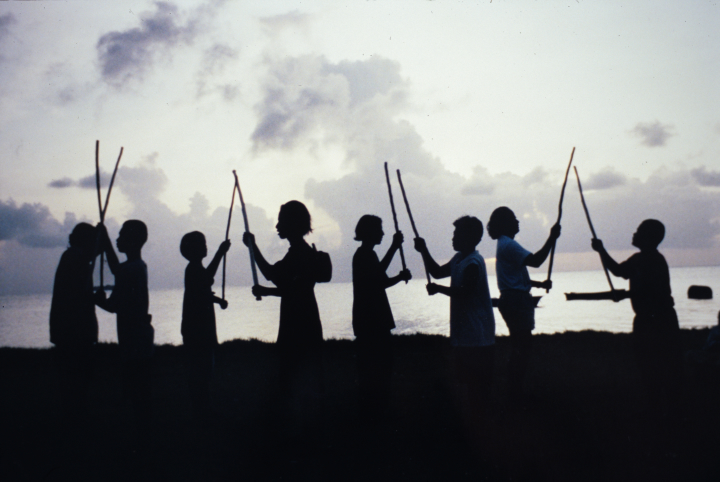 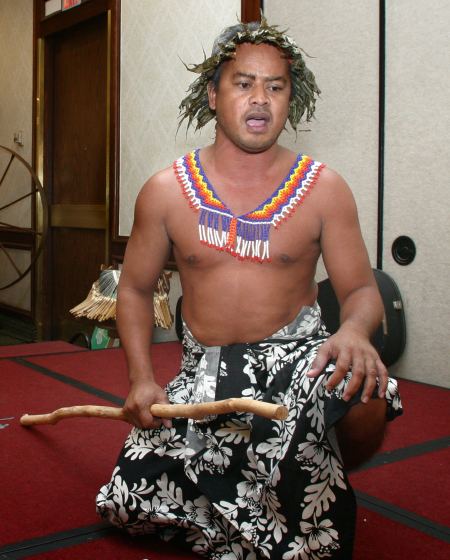 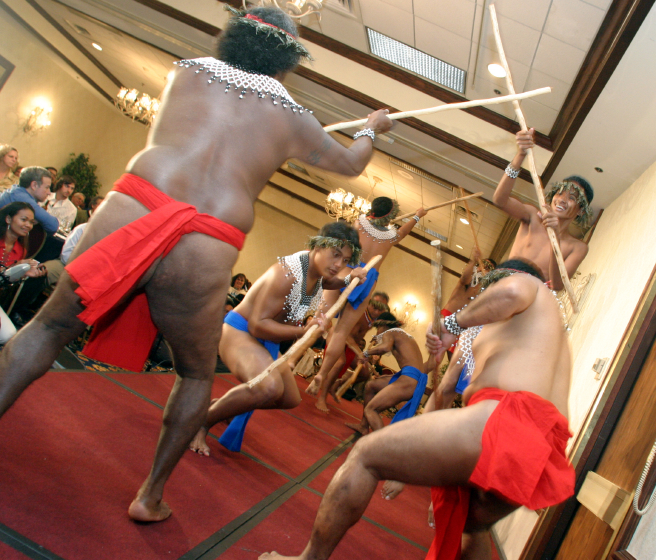 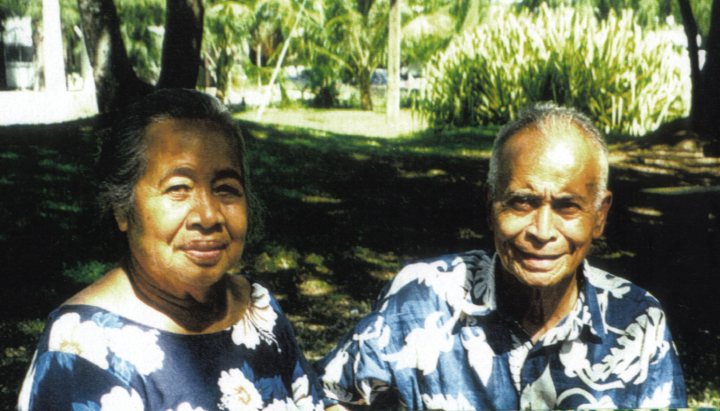 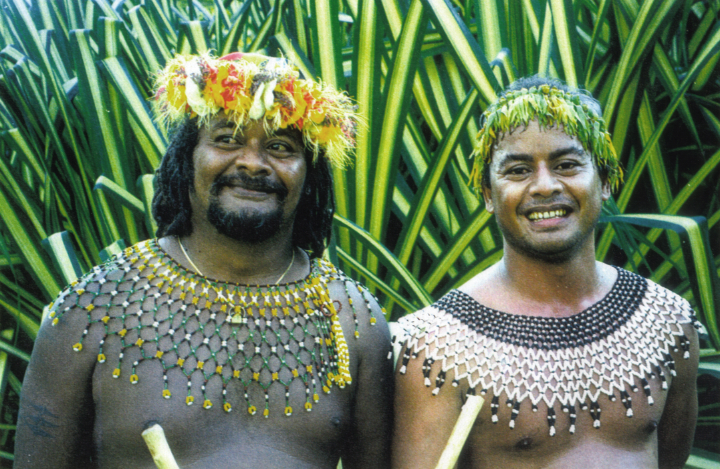 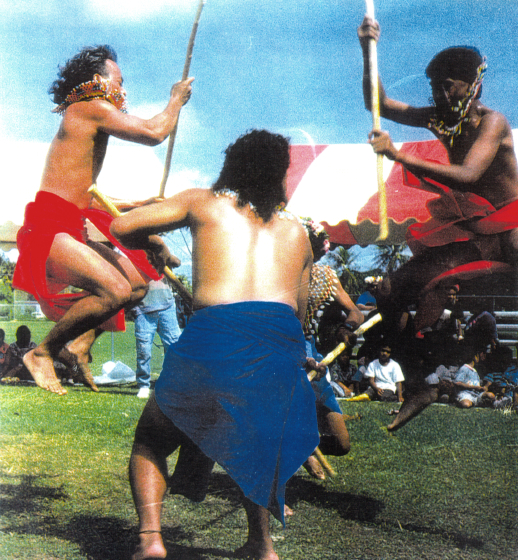 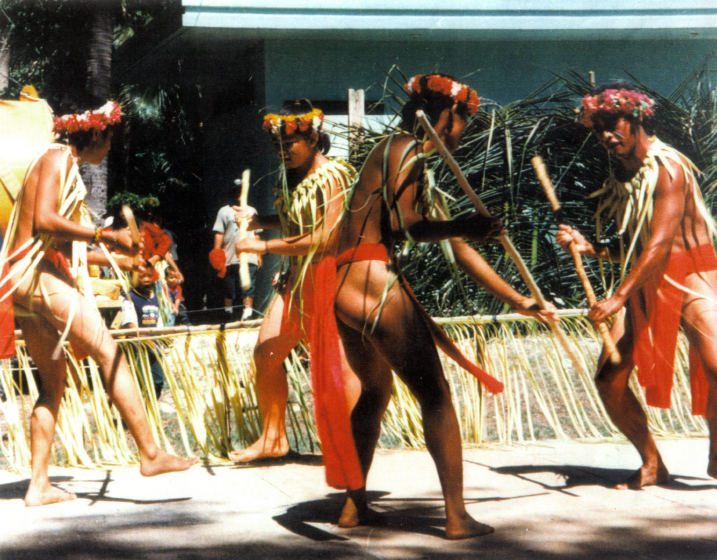 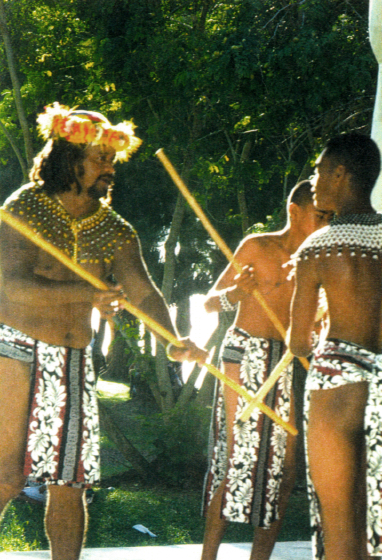 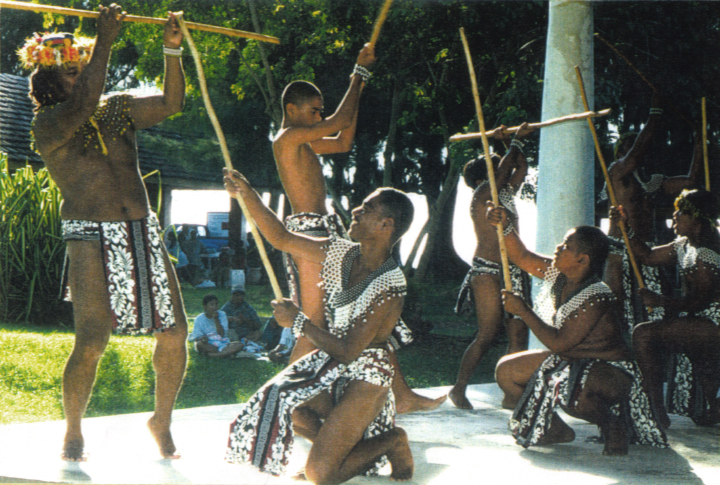 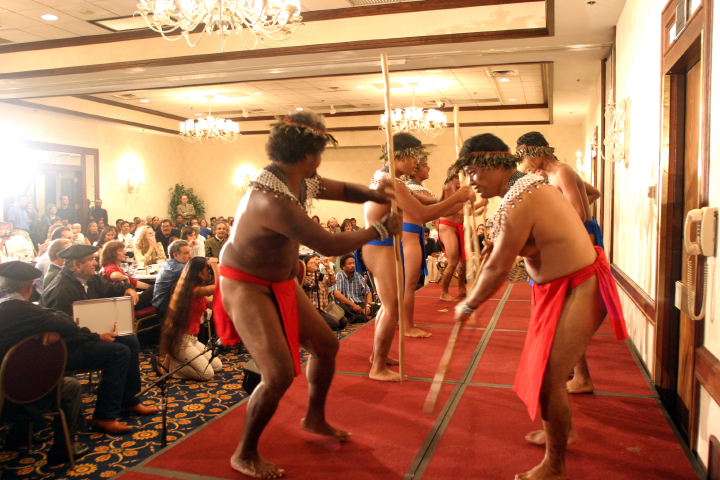 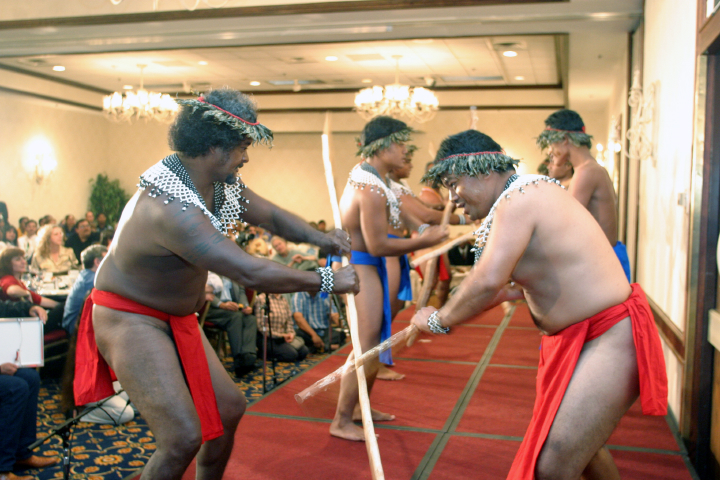 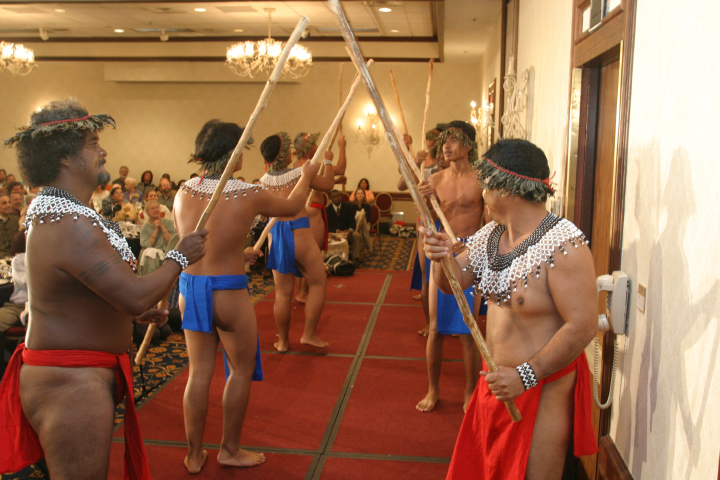 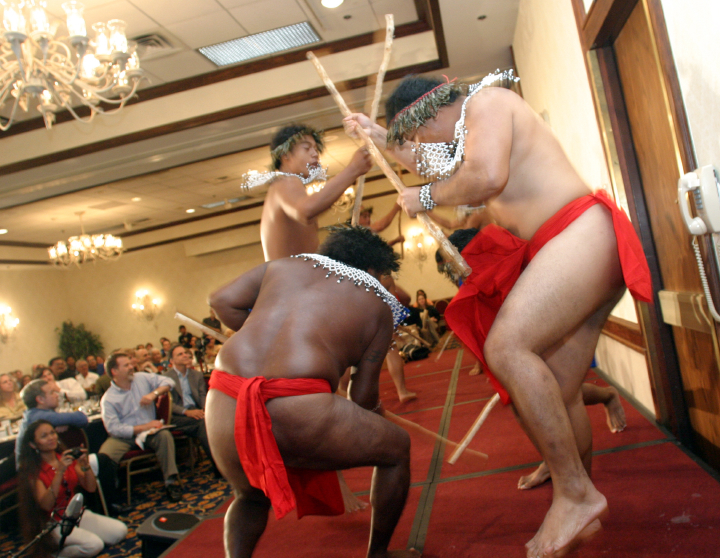 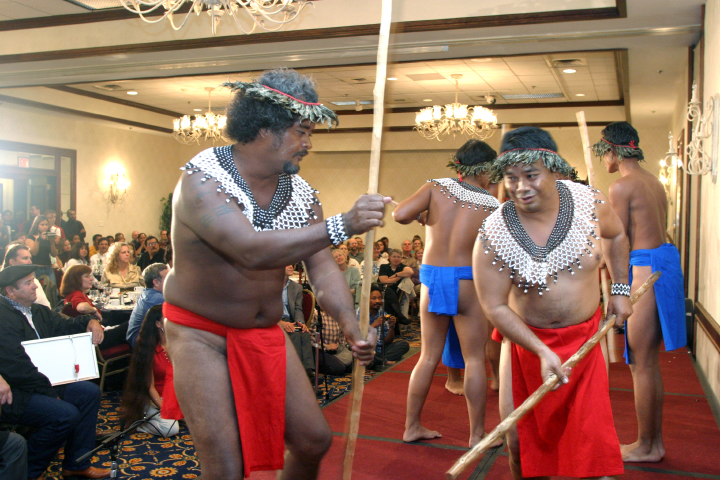 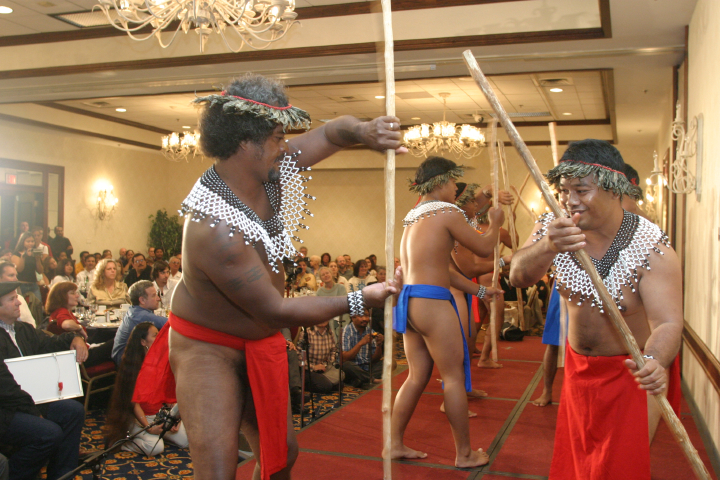 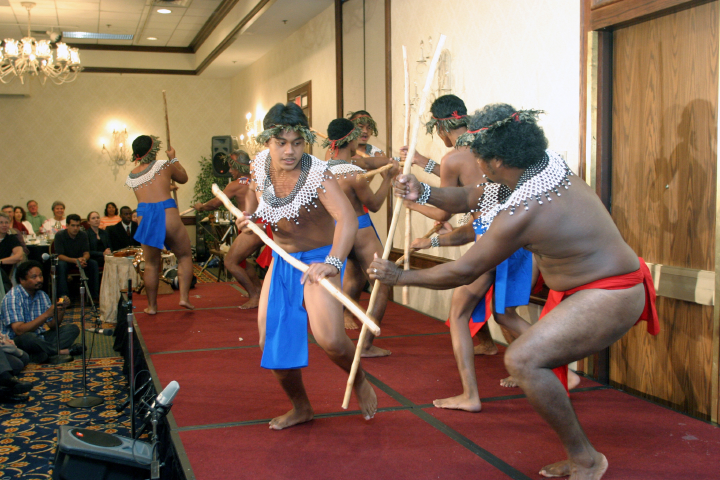 Felipe Ruak is a descendant of the Carolinians, who had migrated to Saipan from their home in the Carolinian Islands in the late nineteenth century. With them, the Carolinians brought stick dancing, derived from old fighting forms. According to oral tradition, the dances came in a dream to an ancestor at a time when war had diminished the clan. In the dream, the man was ordered to arise and dance with a spirit. He did so and was taught not just the dances but also the accompanying chants. The ancestor then instructed him to teach the dances to the warriors so they could protect the clan. After the move to Saipan, the clan was much more secure, and the warriors’ interest in learning the art diminished. Still, the dances were kept alive out of respect for tradition until World War II.

In 1982, Ruak became concerned that the dances were being forgotten. He sent his son Joseph, then 20 years old, to ask older men in the village if they would teach the dances to younger men. No one was willing to participate, so the elder Ruak taught about twenty men, ranging from 15 to 45 years old. Of those, eight stuck it out, and the group performed in the first Flame Tree Arts Festival in Saipan in 1982 as the Talabwog Men Stick Dancers.

Joseph Ruak went away to college and remained in Colorado for nine years. He rejoined the troupe on his return, and the stick dancers have performed in Guam and Japan. In 1996, they joined a U.S. modern dance company in choreographing and performing How the Women Saved Guam, based on traditional material.

“I could feel the urgency of his wanting to pass this on,” Joseph Ruak said of his father in an NEA interview with Mary K. Lee. “I didn't take it seriously enough at first — we'd giggle and laugh and not pay attention. But he told us how lucky we were that we weren't getting beaten up in order to learn the dances. When he was learning the dances, it was pretty much forced down his throat. The elders back then were very serious about the dances — one little giggle during practice or the teaching sessions, and you'd get whipped. After hearing that, I understood that we needed to take what we were doing a lot more seriously.

“You know, a lot of elder men were killed during World War II, and so a lot of the dances were buried with them,” Joseph Ruak said. “As it is, I only learned seven or eight dances from my father. According to him there are ten or twenty or more, but that was all that we could retrieve and save.”

Asked if the dances were difficult to learn, Joseph Ruak replied, “Nothing is difficult if the heart really wants it and if the mind is with the heart. And I really wanted to learn these dances back in ’82. You know, when I 12, 13 years old, I denied being Carolinian. I absolutely did not want to admit that I was Carolinian. But by the time I was 20 years old, I was looking for information. I was knocking on people's doors to find who I was.”

Joseph Ruak answers the question 'How did you learn about the Carolinian culture?' Arlington, Virginia, 2003, interview by Alan Govenar

Joseph Ruak answers the question 'When did you begin to appreciate Carolinian culture?' Arlington, Virginia, 2003, interview by Alan Govenar

Joseph Ruak answers the question 'What does preserving culture mean to you?' Arlington, Virginia, 2003, interview by Alan Govenar