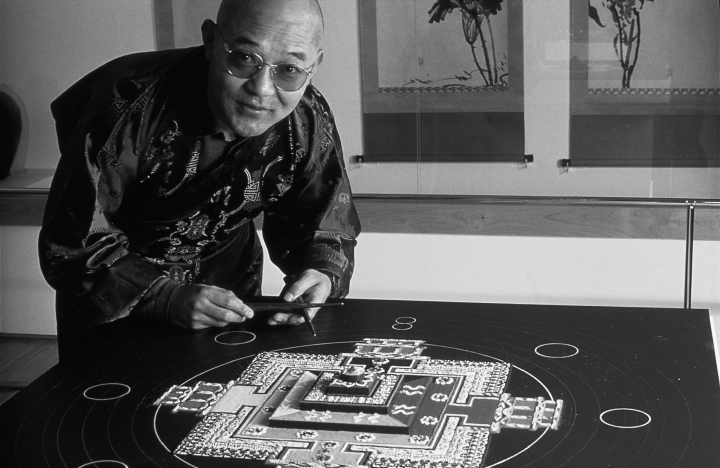 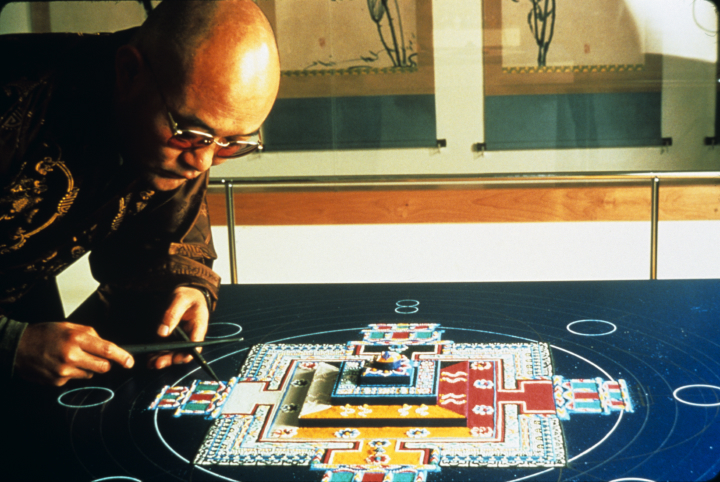 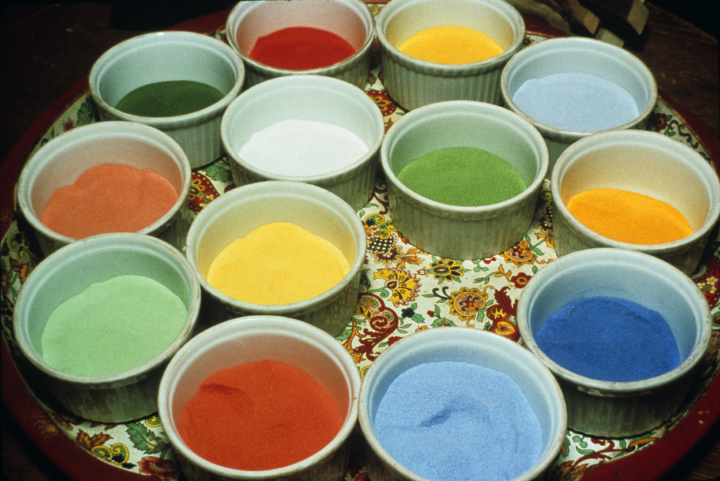 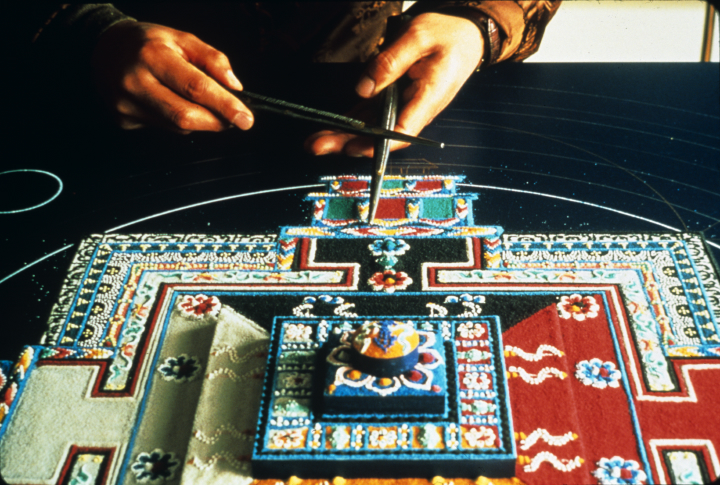 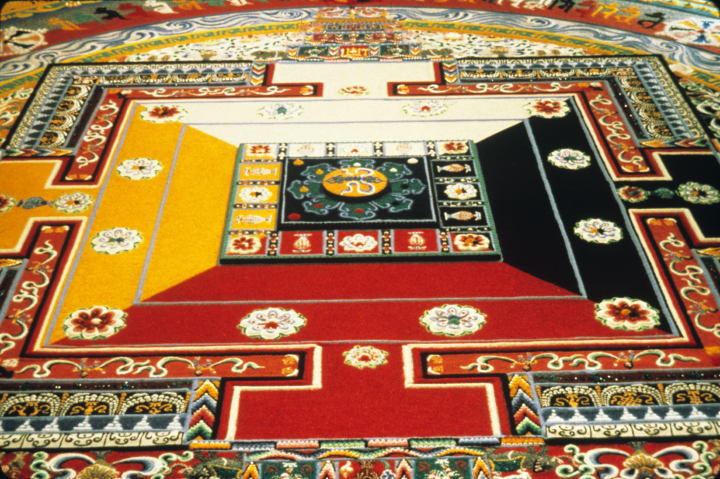 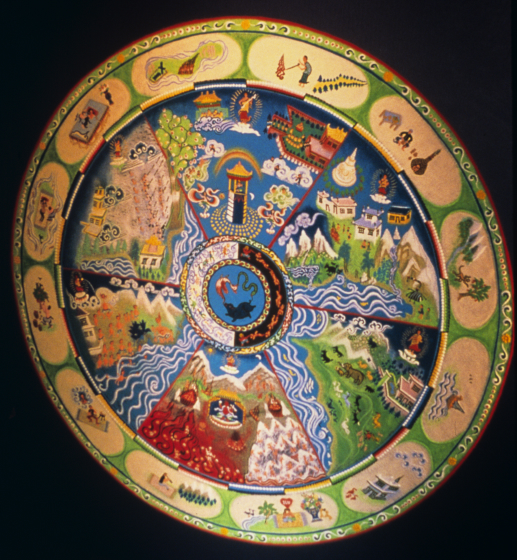 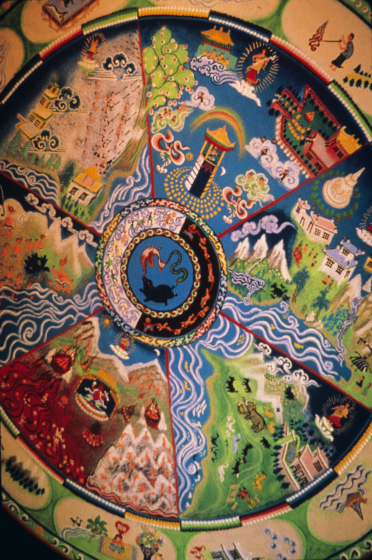 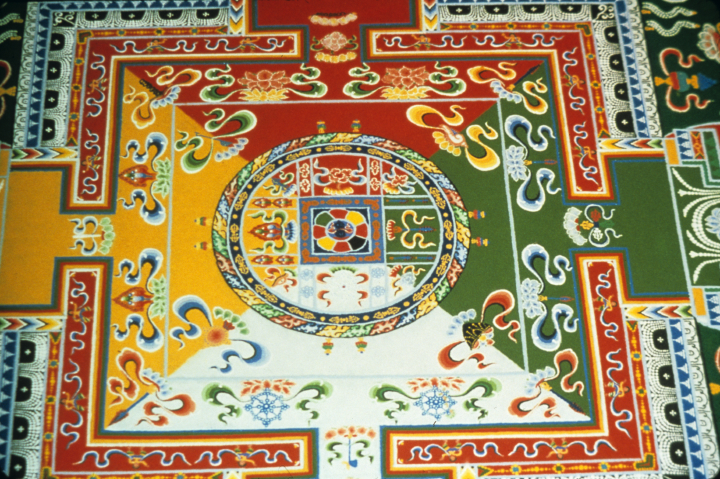 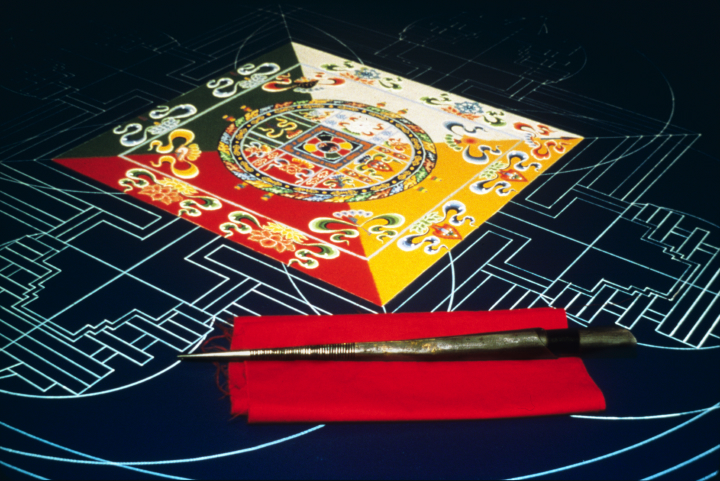 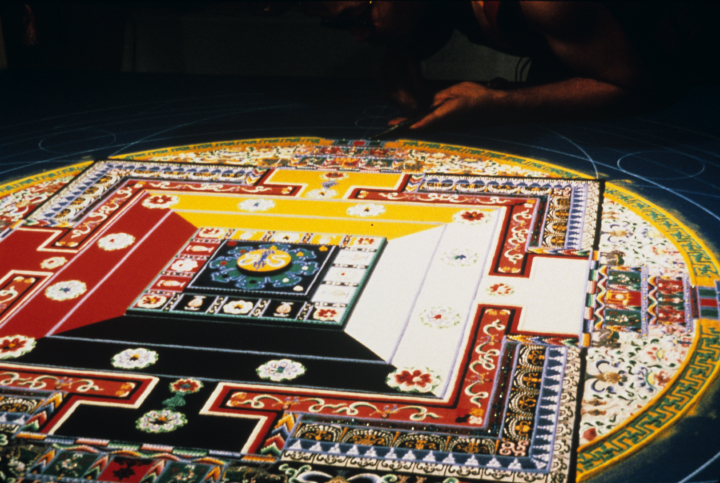 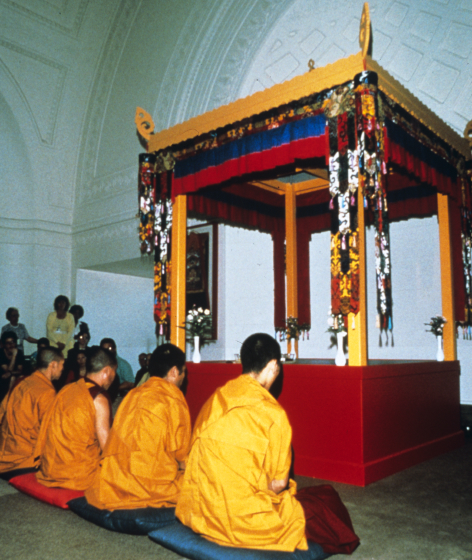 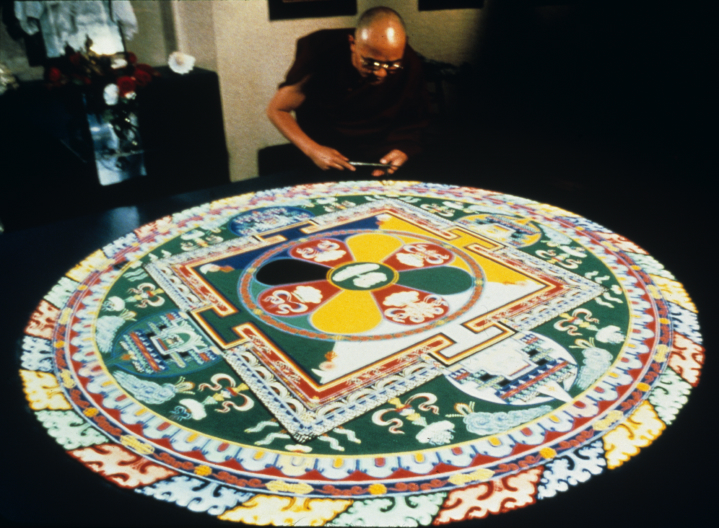 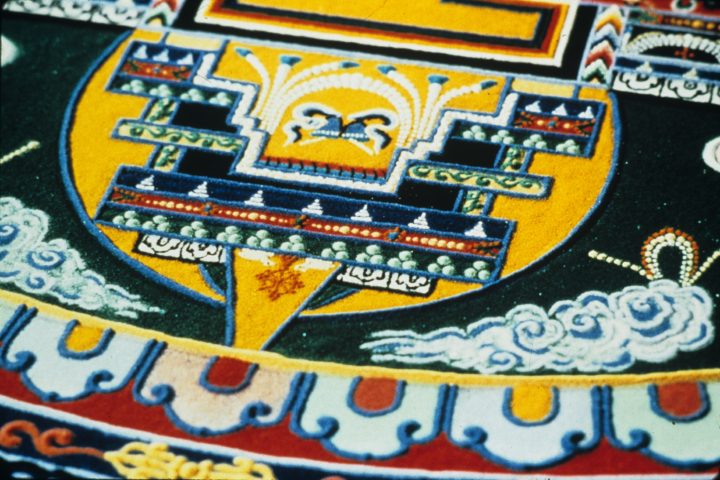 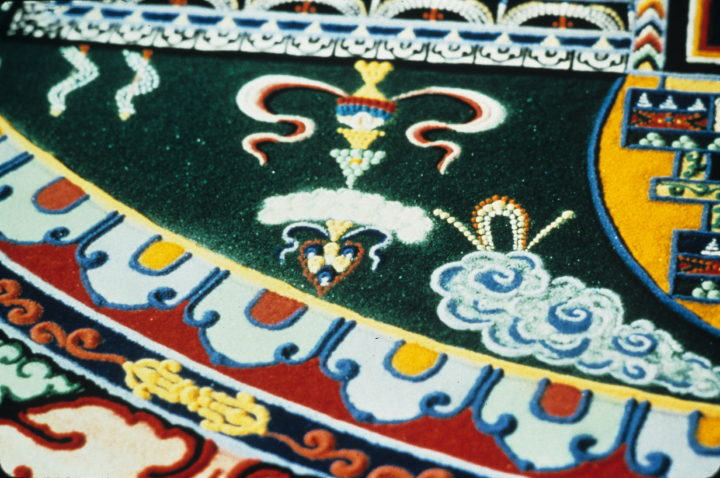 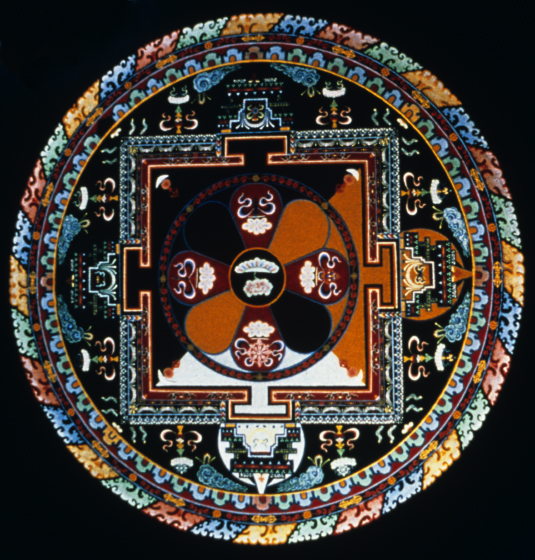 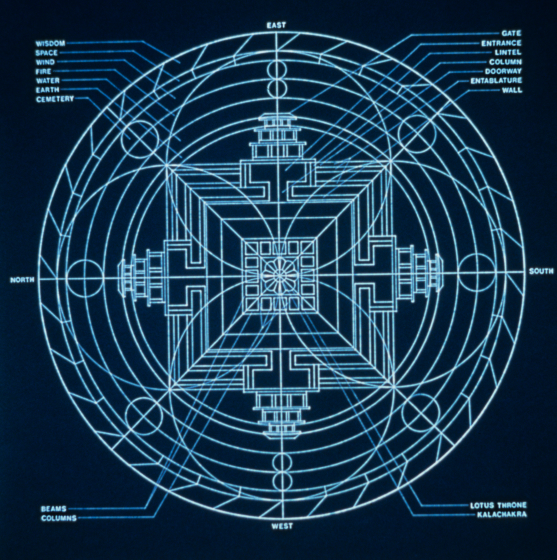 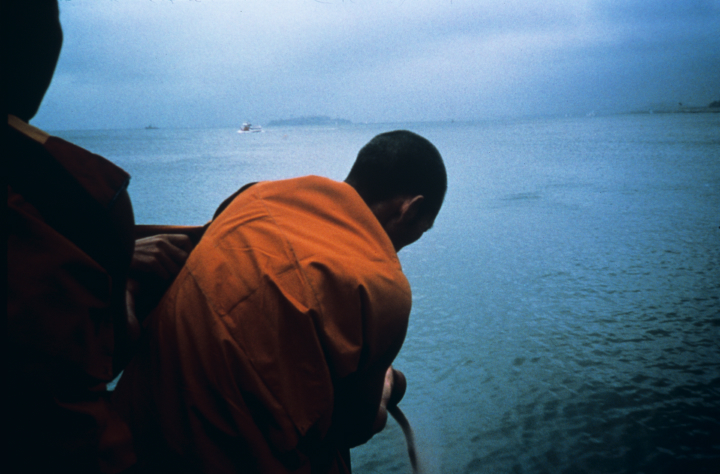 When Losang Samten was about 6 years old, his family fled Chinese Communist domination of their nativeTibet along with many others, including the Dalai Lama. After the family settled in India, Samten studied at the Tibetan Institute of Performing Arts, then entered Namgyal Monastery, the Dalai Lama’s monastery. Samten was ordained as a monk in 1967. Among the subjects he studied at the monastery was mandala painting, an ancient and demanding ritual art that originated in India 2,500 years ago and has been practiced in Tibet for 1,400 years.

In 1985, Samten received his Master of Buddhist Sutra and Tantra degree and began three years of service as the Dalai Lama’s personal assistant. Sand mandala painting had not been seen outside monasteries for centuries, but in 1988, the Dalai Lama asked Samten to create a mandala at the Museum of Natural History in New York. Samten remained in the United States, living in Philadelphia, where he became spiritual director of the Tibetan Buddhist Center and a lecturer on Tibetan language, culture and Buddhism at the University of Pennsylvania. He went on to establish Buddhist centers in New York City, Hartford, Conn., El Paso, Texas, and Reno, Nevada. In 1995, he gave back his monastic vows and became a lay practitioner.

The creation of sand mandalas is accompanied by recitation of prayers and chanting and sometimes by ritual dance. The artists generally draw the design, about six to eight feet in diameter, on a flat surface, then work outward from the center, applying brightly colored sand with small metal funnels called chapkus. The colors, Samten says, have many layers of meaning, and there is an infinite number of designs.

In the words of folklorist Dana Lobell, each mandala is “designed to help the student visualize specific deities, qualities and concepts, thereby preparing the mind to receive the training of the initiation. In addition, the Kalachakra Mandala, the most sacred of all mandalas and the one most presented outside the monastery, is a symbol of peace. By creating the artwork in a specific place, the artist hopes to bring peace to that location.” In 1994, Samten was invited to create a mandala on the campus of Trinity University in Connecticut. Though he was not aware of it initially, the university was going through a period of turmoil, and it recognized him with an honorary doctorate of divinity degree for helping to calm the situation by creating the Mandala of Compassion.

Soon after a mandala is completed, it is ritually dismantled and the sand is poured into a body of water. This, Samten says, is often hard for Westerners to understand. “A lot of civilizations, a lot of traditions, have the idea of creating something from nature for healing or meditation or some kind of call, and then that energy is returned back to the earth, back to nature,” he told NEA interviewer Mary K. Lee. “I’m finding more and more people appreciative of that tradition. But there are still a lot of people who don’t understand why — think it such a pity — that after so many days of working so hard, we dismantle it. It is very difficult for them, which I understand. Many people come up to me and say, ‘Look, Losang, how nice this work is. You’re an artist, and the life of an artist is not easy. You can sell this, you can make a lot of money here.’ People have different ideas.”

Samten is modest about his role. “In the U.S., while people have lots of wonderful things, many are depressed and looking for different answers,” he told Lee. “There’ s quite a bit of interest in spirituality and meditation. I don’ t see myself as a spiritual leader or mentor. I’m just an ordinary artist. I studied a kind of Buddhist philosophy and meditation. I came here and am doing sand painting, but sometimes there’s a lot of interest in what I’ve learned from His Holiness the Dali Lama and some of the things I have heard or read. So I just go around and share some of the ideas which can bring people peace.”

Losang Samten answers the question 'Could you talk a bit about when you were born, where you grew up, and how you learned to do sand painting?' Washington, D.C., 2002, interview by Alan Govenar

Losang Samten answers the question 'What kinds of sand do you use? Are they natural sands?' Washington, D.C., 2002, interview by Alan Govenar

Losang Samten answers the question 'How old were you were you first saw a sand painting?' Washington, D.C., 2002, interview by Alan Govenar

Losang Samten answers the question 'On what occasion would people make this in Tibet?' Washington, D.C., 2002, interview by Alan Govenar

Losang Samten answers the question 'What is the origin of sand painting?' Arlington, Virginia, 2002, interview by Alan Govenar

Losang Samten answers the question 'What is the meaning of the mandala?' Arlington, Virginia, 2002, interview by Alan Govenar

Losang Samten answers the question 'What was it like when the Communists occupied Tibet?' Arlington, Virginia, 2002, interview by Alan Govenar