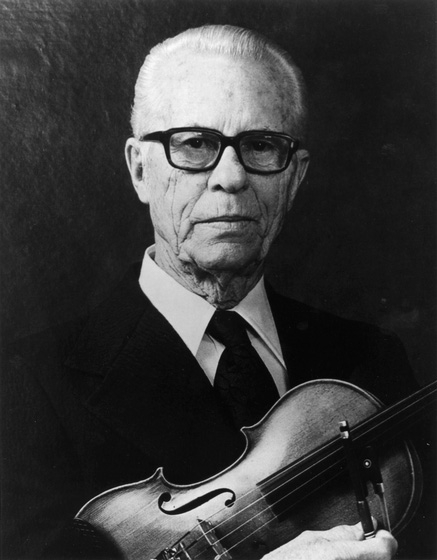 Lyman Enloe grew up in a musical family in Cole County, Missouri, on the northern edge of the Ozarks. His father, Elijah "Lige" Enloe, was a renowned fiddler who played for square dances throughout the region. Lyman got his training playing rhythm guitar for his father, his older half-brother Wade and his Uncle "Pink" Enloe. Occasionally he would get a fiddle bow across his head as a reminder to change chords.

Enloe didn't start playing fiddle until he was 22, and then, he said, "It was kind of a joke. My wife was sick, and I had to stay home from work. My dad had given me a little old fiddle; it was almost full-sized. He had kind of worked it over himself. And I just had it hanging on the wall, never dreamed of ever playing it. I was sitting around the house like that, and all of a sudden I looked at that little old fiddle and told my wife, 'I believe I'll get that thing down, tune it up and learn to play it.' She laughed at me, said, 'That'll be the day,' because I would never quit playing guitar, and I didn't think I would. I did just that and got hooked on the darn thing, and I've been playing fiddle ever since."

By 1930, Enloe was playing on radio programs broadcast from the dome of the state capitol in Jefferson City. Exposure to many of Missouri's top fiddlers, including Tony Gilmore, provided him with a broad repertoire of traditional fiddle tunes of the region and a playing style that has been described as "pure, clean, sweet notes with a bowing arm of rolling molasses."

In the late 1940s, Enloe moved with his wife, Myrtle, and nine children to Kansas City. He worked as a painter and later started his own business. He also fiddled in a popular square dance band. He recalled once playing when thirty-two sets of four dancers were on the floor. Several of Enloe's children became musicians, and they played in a family band for several years. In 1966, Enloe joined a group called The Down Home Folks. A few years later, they changed the name to the Bluegrass Association, which featured Enloe's daughter Audrey on vocals.

The group backed Enloe on the influential album Fiddle Tunes I Recall. Today, many of the rare tunes he recorded have become part of the fiddle repertoire around the country because this obscure regional recording was distributed nationally by County Records at the suggestion of National Heritage Fellow Kenny Baker. In 1984 and 1985, Enloe was named Old Time Fiddler of the Year by the Society for the Preservation of Bluegrass Music in America.

The illness and death of Enloe's wife silenced his fiddle for a time. But he resumed playing and enjoyed teaching younger musicians and entertaining at jam sessions at his home.