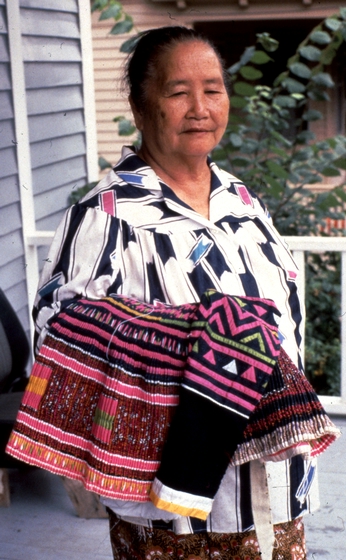 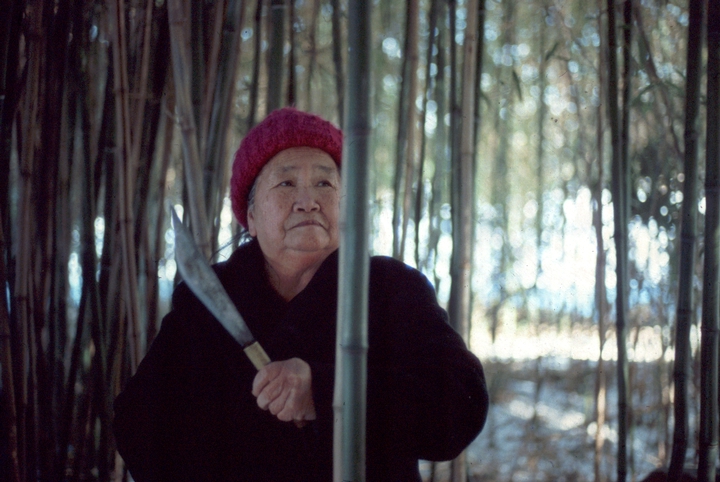 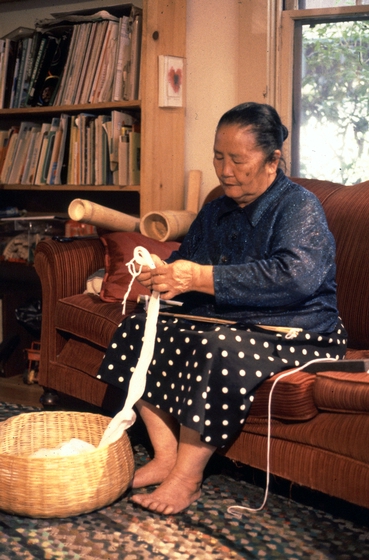 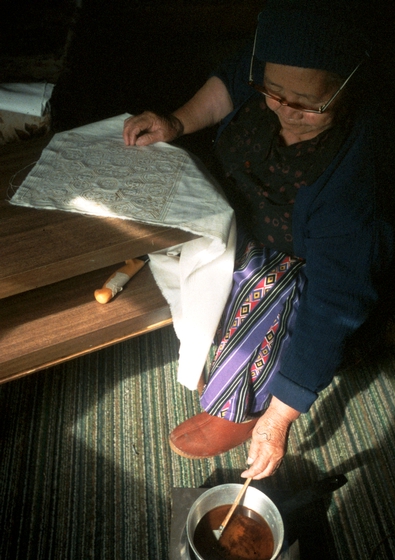 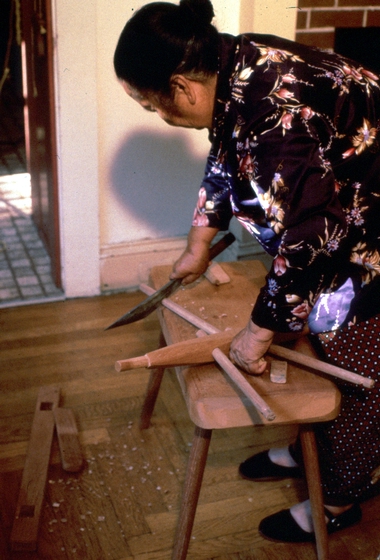 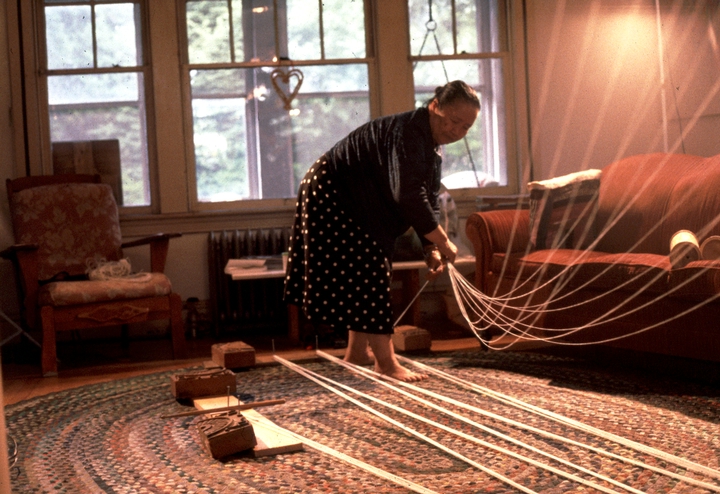 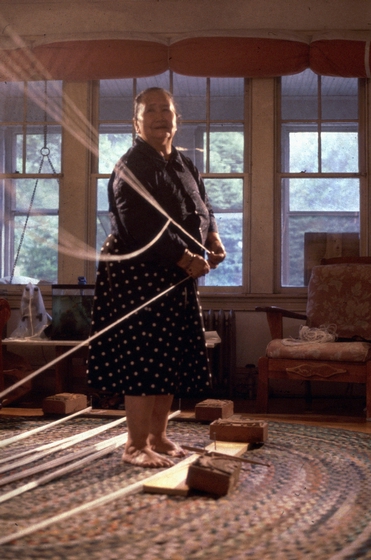 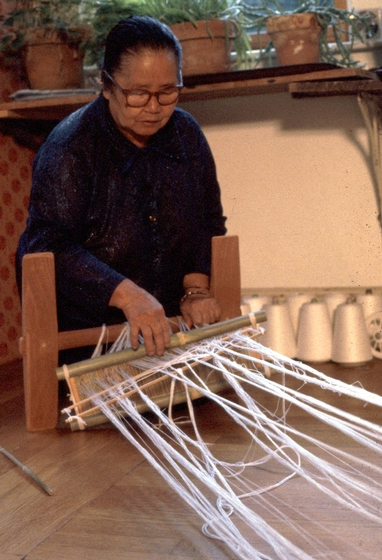 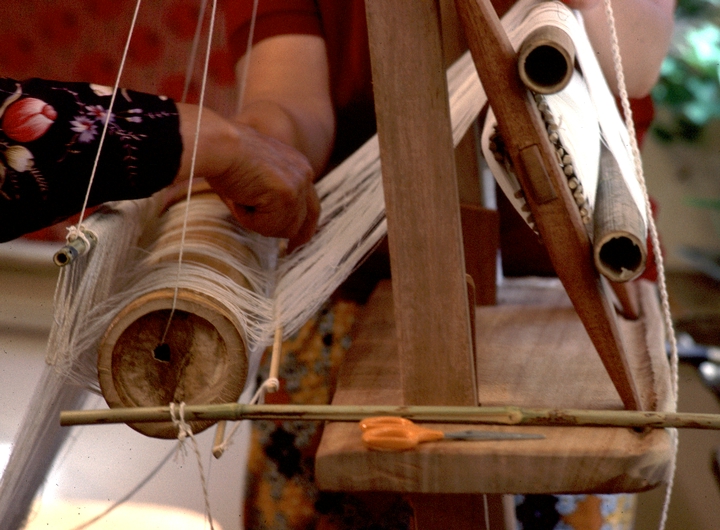 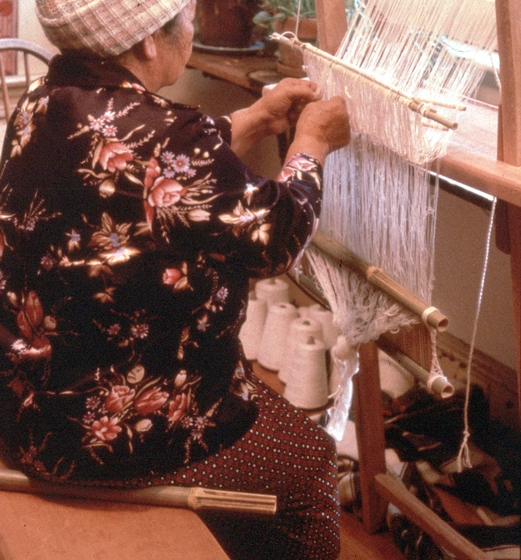 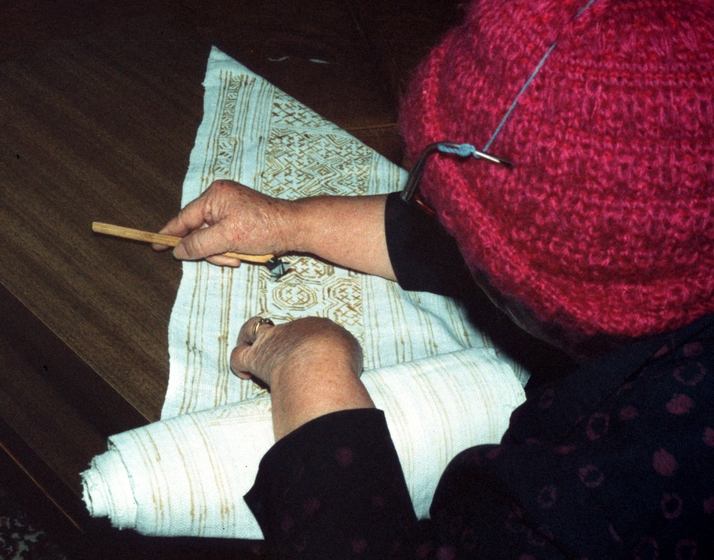 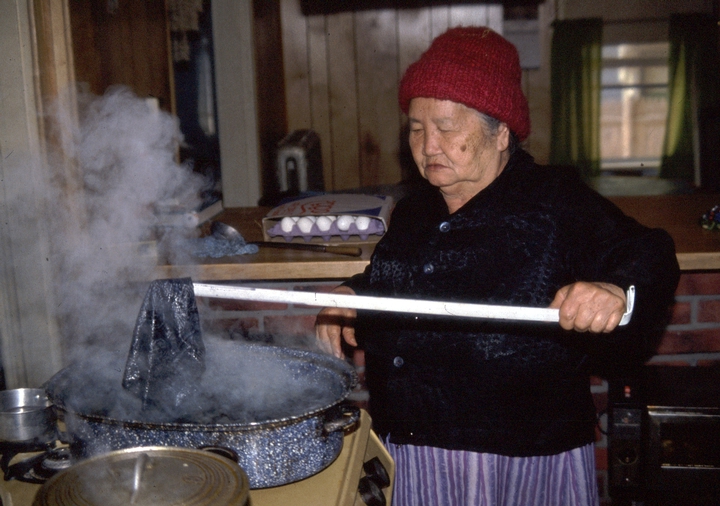 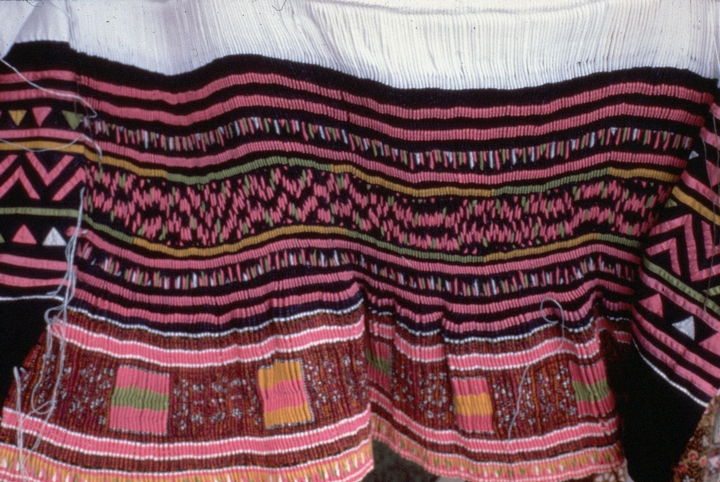 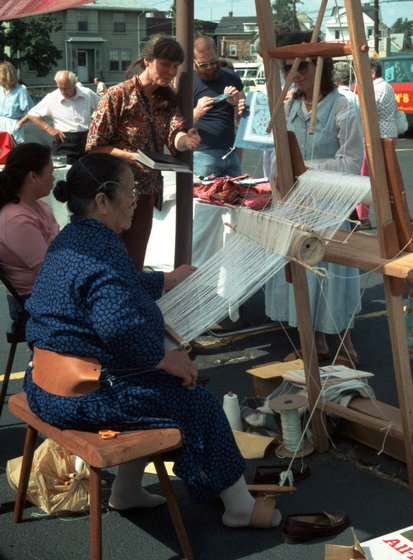 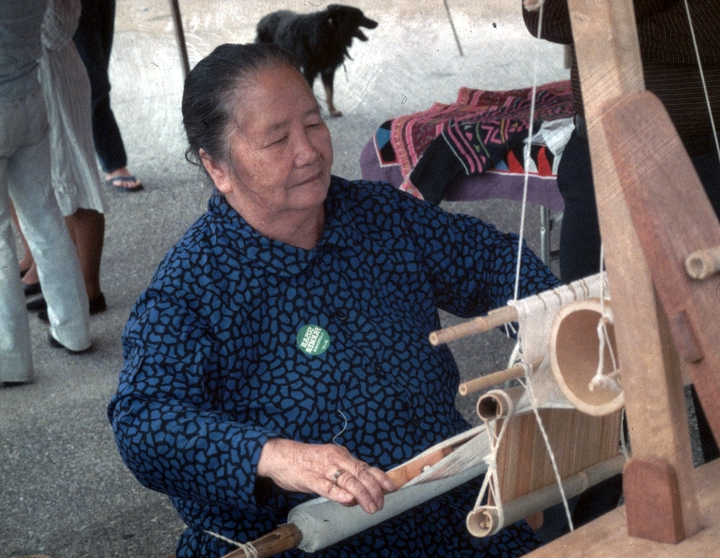 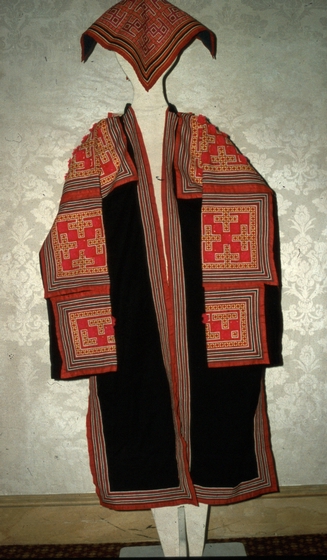 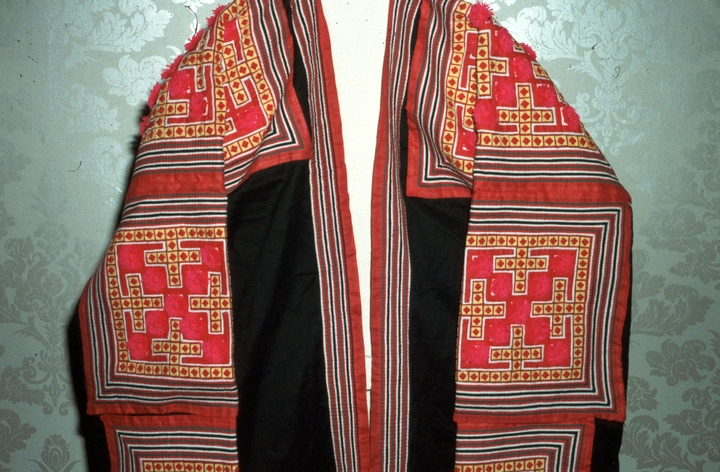 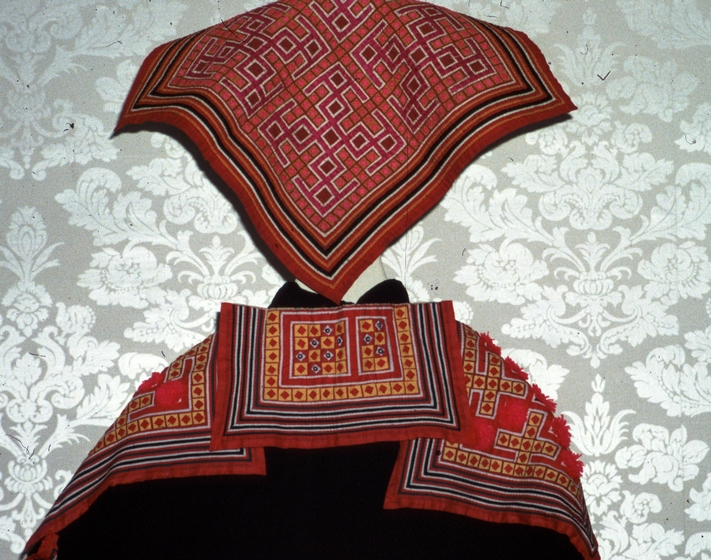 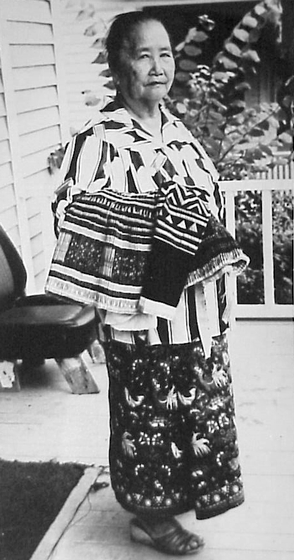 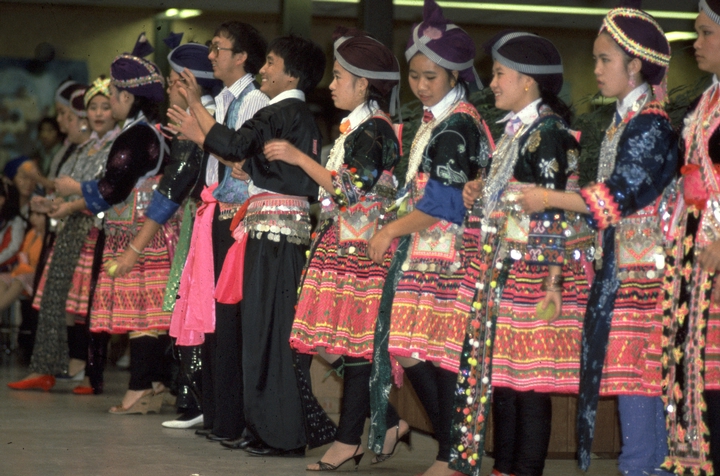 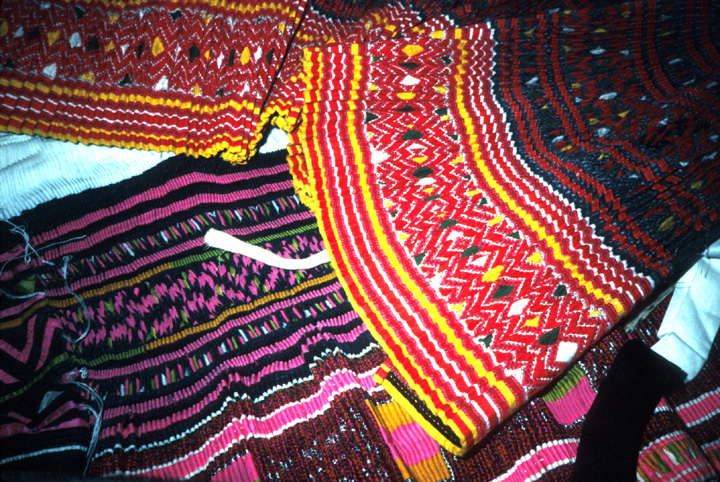 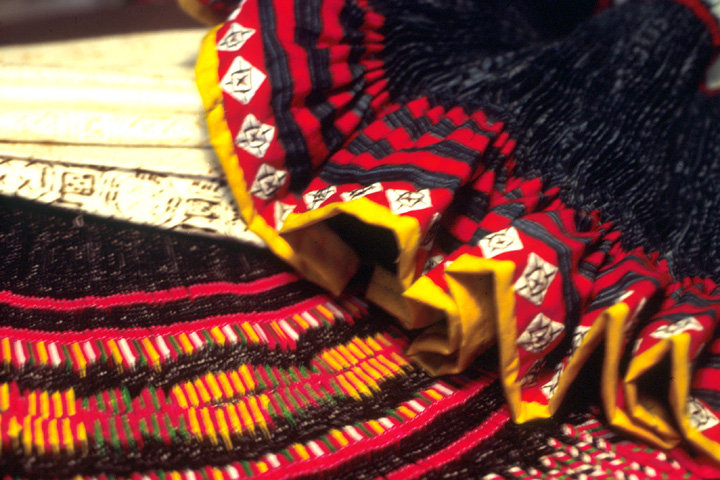 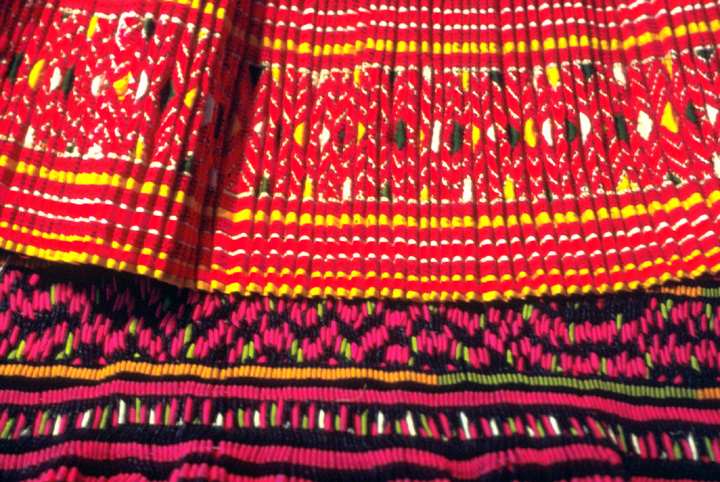 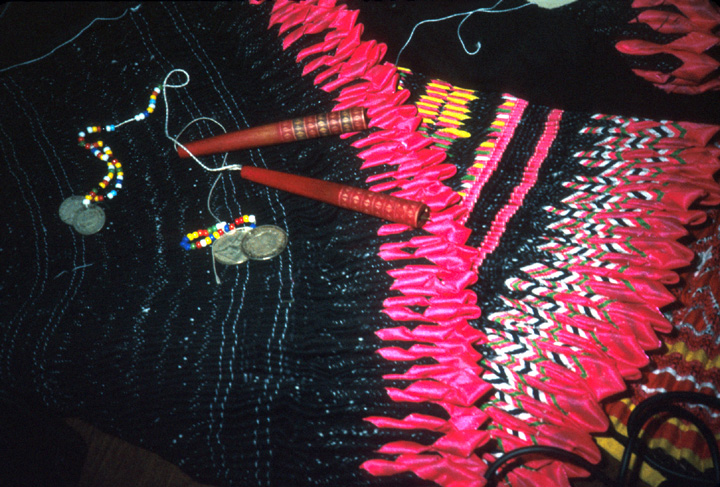 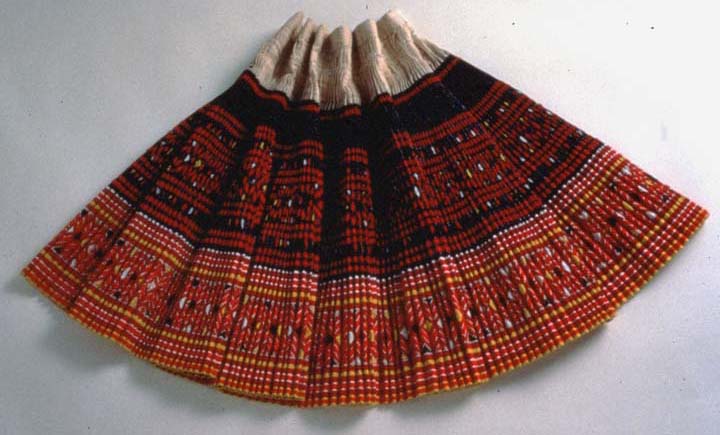 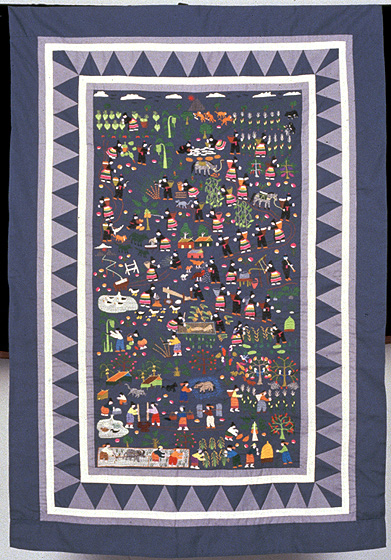 Yang Fang Nhu grew up in a small Hmong mountain village of ten households in northern Laos. As a child, she stood close to her mother's loom and watched her push the sword shuttle carrying the bobbin of weft thread back and forth.

By the age of 15, Fang Nhu had learned many of the intricacies of making cloth. She knew how to grow the hemp, harvest it, break it down into fibers, soak it, spin it, set up the loom, and weave the hemp into the traditional white cloth, well-suited for indigo dyeing, batiking, embroidery, appliqué and pleating.

Traditionally, the Hmong used the backstrap loop, on which the warp is stretched between a stationary object and the body of the weaver. In this way, the backstrap weaver is herself a part of the loom and can fine-tune the tension of the warp by moving her body. The Hmong loom is similar to the loom of the Zhuang people living in southern China and to the peasant looms in Korea and Japan.

Making hemp fiber for the Hmong loom is a complicated process. Hemp is grown for the thread because it holds pleats and has a substantial weight. The hemp plant grows for about 2 1/2 months before it is harvested. All the leaves are stripped and the stalk is carved off. After drying in the sun for fifteen days, the stalks are broken in half; the greenish-brown fibers are pulled from one side to the other and later pounded with a wooden mallet. The fibers are then rolled onto a stick and prepared for a spinning wheel with four spindles that twist the fibers into tight skeins of thread, which in turn are bleached white and rinsed. The resulting yarn is sized with wild beeswax and flattened while still damp with a wooden roller. Once dried, the yarn is wound loosely into a ball and put in baskets until needed on the loom.

When Fang Nhu was 16 years old, she married Nouyi Yang and, as is customary, moved to her husband's village — a larger one of fifty households. There she raised a family of seven children, worked in the fields, carried water and cultivated the fields of hemp for her weaving. Every year, she wove three skirts, two for everyday use and one to be worn for the annual New Year's celebration. She also wove the cloth to make shirts and pants for the men in her family and village.

In 1978, Fang Nhu and her husband were forced to leave Laos, their livelihood threatened by the Communist regime. At the time, they lived in Vientiane, the Laotian capital, and in secrecy they fled by boat across the Mekong River to Thailand. Her husband had been trained by the French military in 1943, and they were thus able to immigrate to France. In 1984, they moved to Providence, Rhode Island, to join their youngest son.

In Providence, Fang Nhu became active in the immigrant Hmong community and was eager to teach her weaving skills to her daughter-in-law Ia-Moua Yang. For Fang Nhu, weaving was not just making cloth but was representative of a social fabric. Her care for the craft paralleled her nurturing of people and their customs. Weaving was the thread that linked her to her ancestors and to each of the Hmong people.

In Laos, the Hmong divided themselves into different groups, identifying themselves by noting the distinctive colors of women's dress — the White Hmong, the Blue Hmong and the Striped Hmong, all living in different regions of the country. In the United States, however, these distinctions are less significant. Given the dislocation of the Hmong people, a pancultural identity has emerged that has brought these cultural groups closer together.

Fang Nhu likes to tell the story of an old woman who died in Providence. She felt culturally dislocated before her death, and neither she nor her family knew what she should wear for her funeral dress. In desperation, this old woman was buried in Western clothes, but her spirit came back in nightmares to her family because she was lost and was unable to find her ancestors. For Fang Nhu, this story was a means to impress upon her family and community the importance not onlyof making traditional funeral clothes, but of the essential need to know "how to die" and "rest in peace."