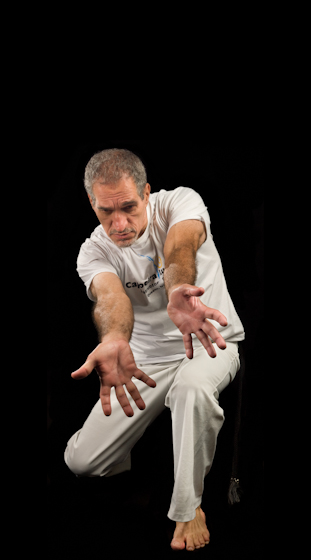 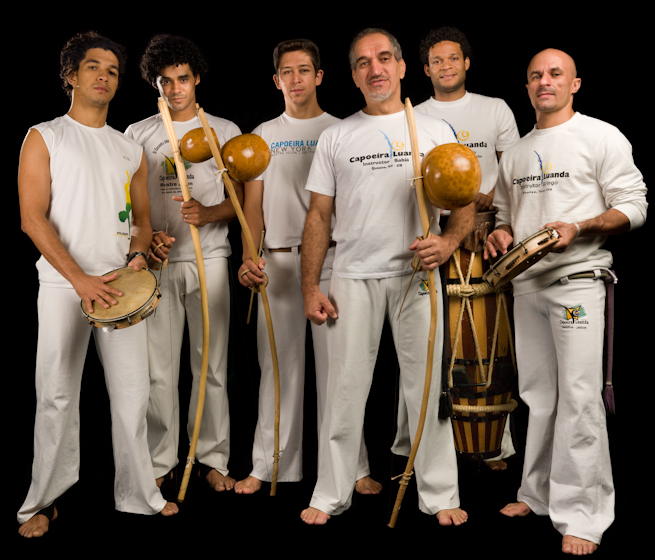 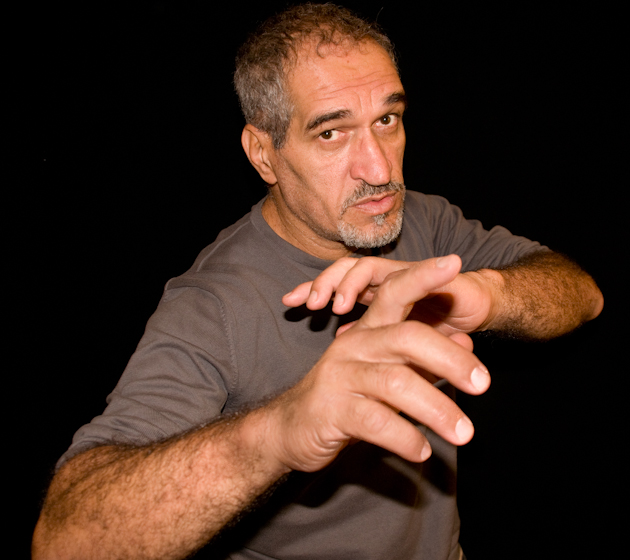 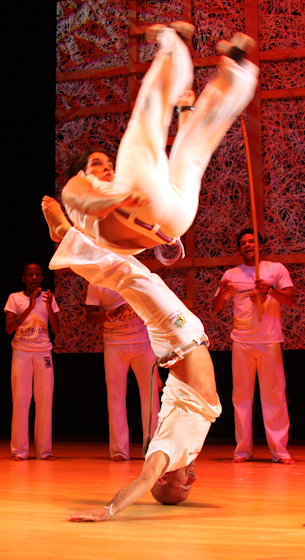 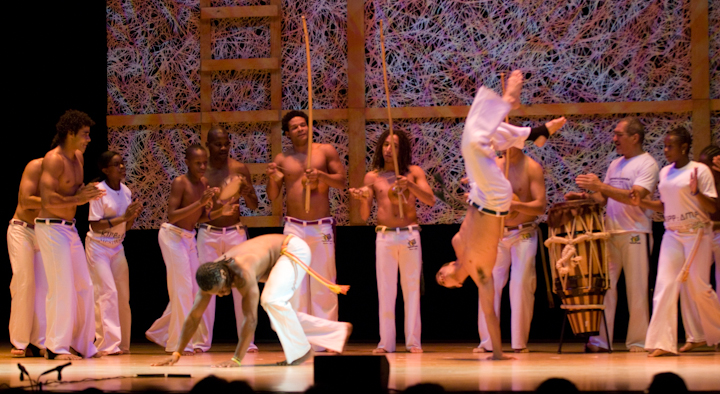 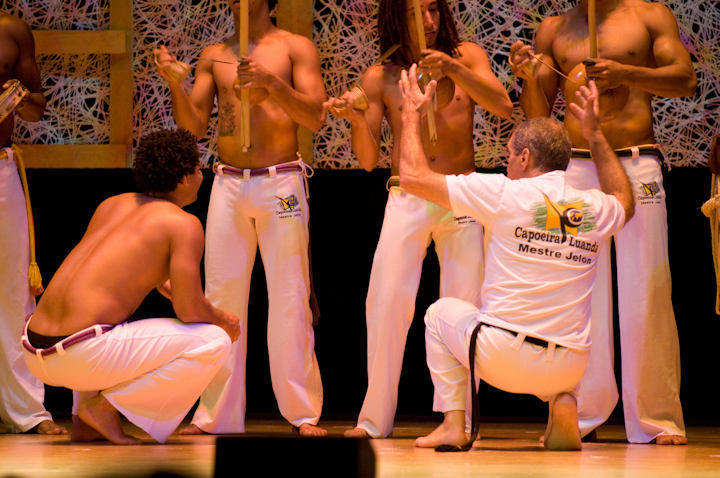 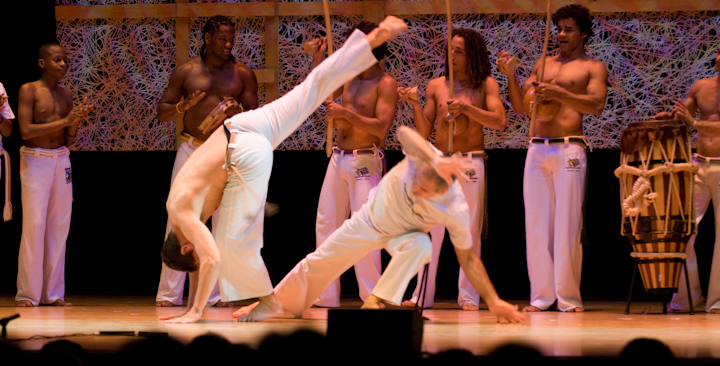 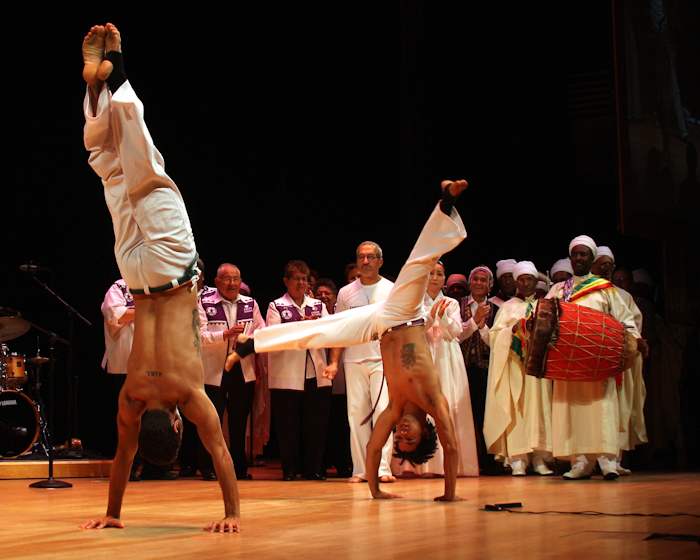 Jelon Vieira first encountered capoeira at age 9 in his hometown, Santo Amaro da Purificação, Bahia, Brazil. He was on his way to get a haircut when he saw someone engaging in the unique mix of martial arts and dance. Fascinated, he forgot the haircut and lingered for hours. But when he told his mother of his experience, she warned him against studying capoeira because of its negative reputation. Undaunted, he began studying with masters and telling his mother that he had returned home sweaty because he had been playing soccer, which was socially acceptable. He also studied dance at the Escola de Ballet Teatro Castro Alves.

In the 1970s, Vieira moved to the United States and founded DanceBrazil, a professional company that has performed widely at home and overseas. In the 1980s, he established the Capoeira Foundation to promote Afro-Brazilian cultural forms. Enslaved Africans created capoeira as a sort of play fighting that would not seem threatening to their Portuguese masters. Participants move in a circle, their movements graceful and subtle, and spectators join in. Vieira has described capoeira as “a dialogue between two people” in which improvisation plays an integral part. It requires mental and spiritual as well as physical discipline and leads to a deep self-knowledge. His students must immerse themselves in capoeira, learning to play its music and to speak Portuguese.

“Capoeira for me is very much a life philosophy,” Vieira told an interviewer. “Capoeira taught me respect for life at a very early age. Capoeira gave me discipline. Capoeira gave me a good sense of being respectful, being responsible and disciplined. And the spirituality I very much believe comes from the music that makes you feel capoeira. I believe I was meant to learn capoeira, that it was my mission in life to do capoeira, teach capoeira and pass on capoeira to others.”

Vieira, who lives in New York City, became a guest instructor in the African-American Studies Department of Yale University in 1982 and has taught at many other colleges and universities and worked with a number of dance companies and cultural institutes, including the Carver Community Cultural Center in San Antonio. In 1993, with Carver Director Jo Long, he created Ile Bahia de San Antonio, the House of African-Brazilian Arts, to focus on training at-risk minority students.

His students have included such high-profile figures as soccer star Pele and actors Wesley Snipes and Eddie Murphy, but he returns to Brazil for several months each year to teach disadvantaged youth and to find renewal through older practitioners of the form, with whom he loves to play instruments and sing.

The story of Vieira and his work is the subject of Ginga, a documentary by Brazilian filmmaker Gustavo Moraes. The title comes from a key movement in capoeira that takes its name from the Portuguese word for “swing.” The film focuses on Vieira’s use of capoeira to reach young people in his hometown. “His drive to give back and use capoeira as a teaching tool really got me excited,” Moraes told an interviewer. “It is difficult to understand the magic until you see the results in those kids’ eyes.”

Jelon Vieira answers the question 'Could you talk about your childhood?' Interview by Alan Govenar, Bethesda, Maryland, September 16, 2008

Jelon Vieira answers the question 'What appealed to you about capoeira?' Interview by Alan Govenar, Bethesda, Maryland, September 16, 2008

Jelon Vieira answers the question 'Have you ever had any other day jobs?' Interview by Alan Govenar, Bethesda, Maryland, September 16, 2008

Jelon Vieira answers the question 'What are the instruments used in capoeira?' Interview by Alan Govenar, Bethesda, Maryland, September 16, 2008