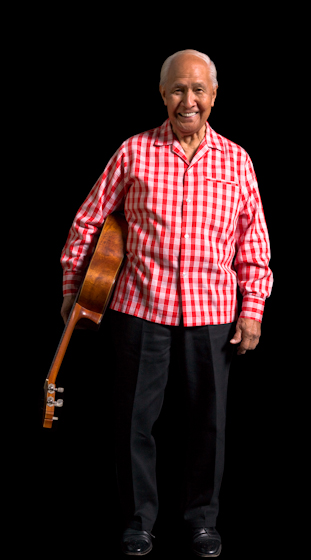 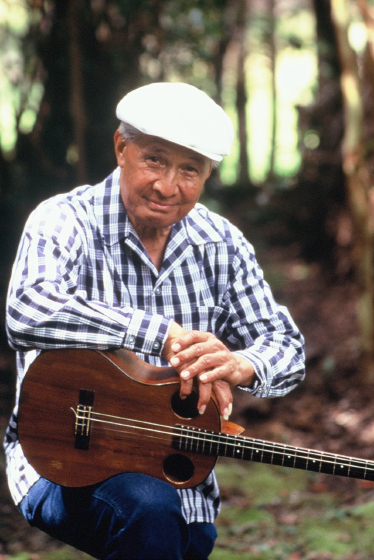 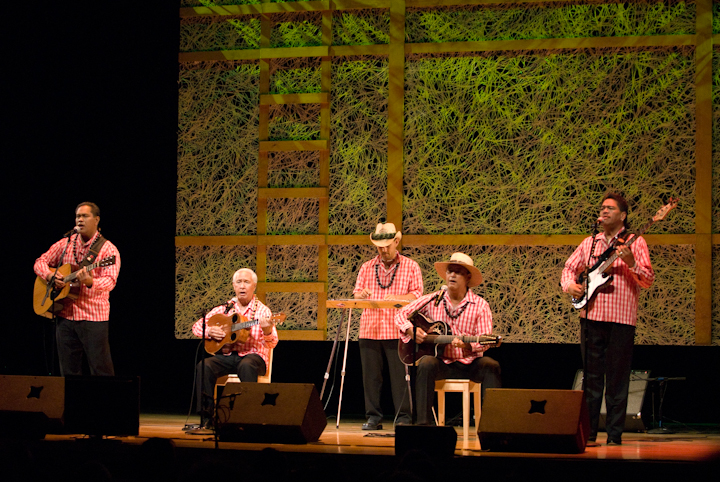 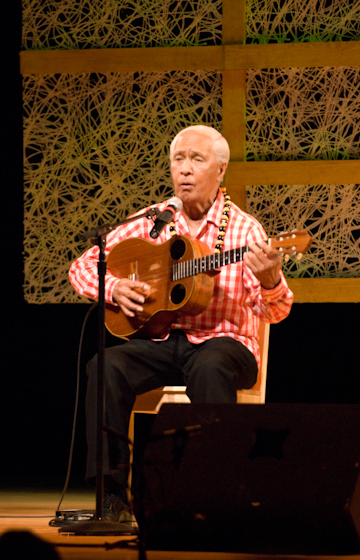 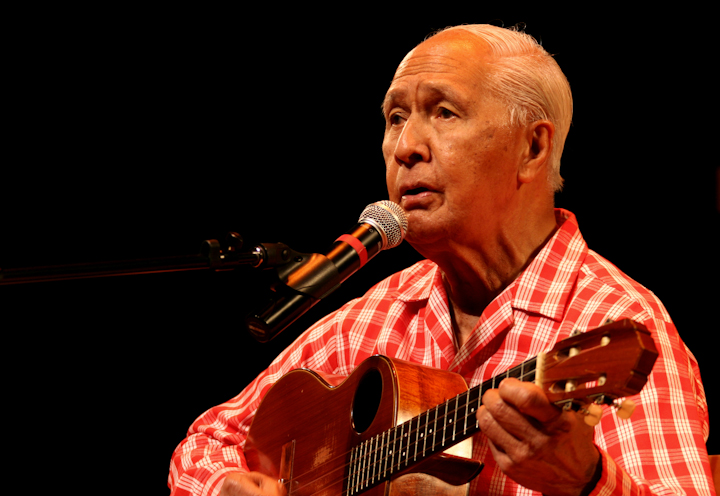 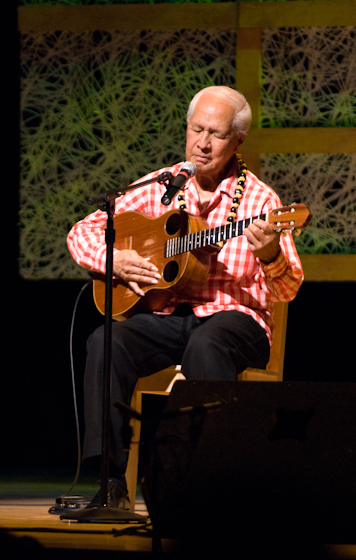 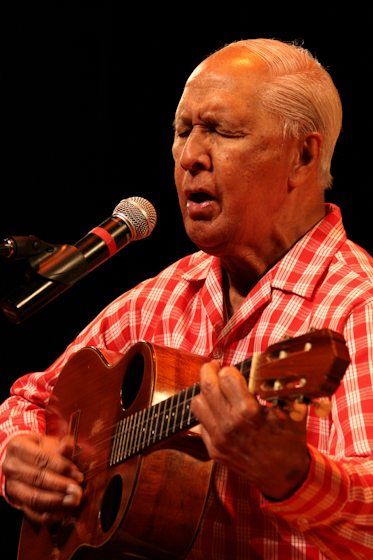 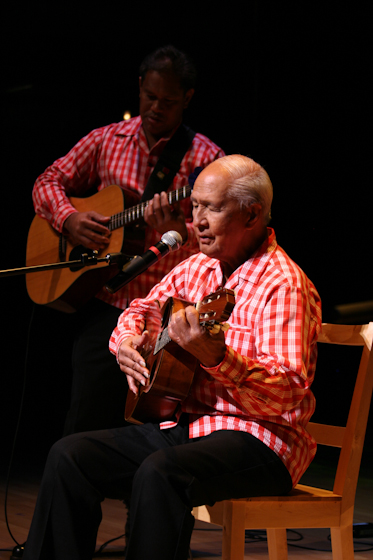 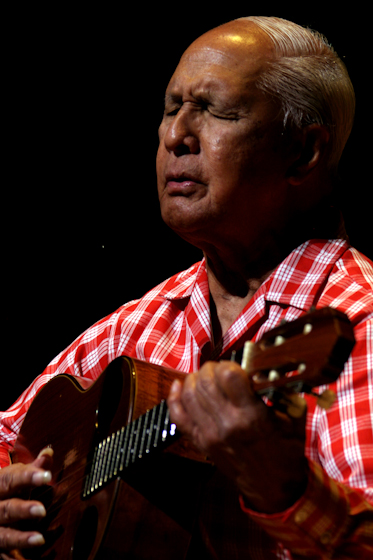 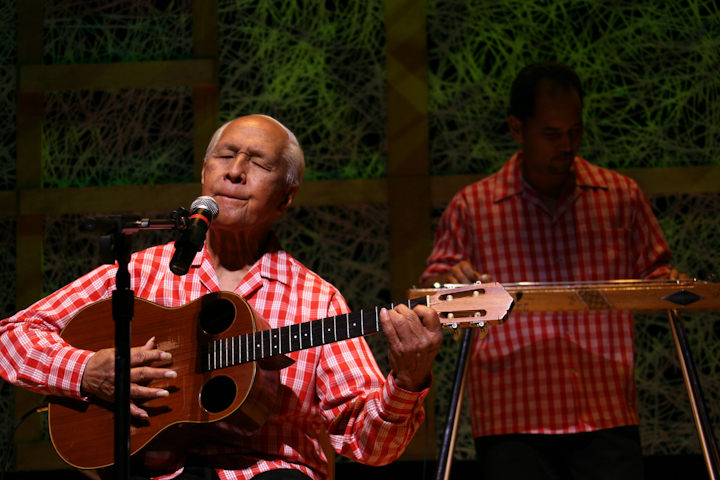 Eddie Kamae grew up in Honolulu, Hawaii, in a family steeped in Hawaiian tradition. His grandmother had been a court dancer for King Kalakaua. Kamae learned to play the ukulele on an instrument that his brother, a bus driver, had found on a bus and brought home. When his brother went off to work, Kamae would grab the uke and play along with songs on the radio. By the time he was 14, his father was taking him to jam sessions. “When they called me on stage, I walked up with my ukulele and started playing, and people threw money on the stage and asked me to do another one,” Kamae told NEA interviewer Mary Eckstein. “I looked forward to that every week! My father always loved to take me to those, was happy to see me doing things like that. And I began to think, ‘Oh my God, all these things I’ve been doing finally pays off.’”

In 1949, Kamae toured the U.S. mainland with Ray Kinney’s Hawaiian Revue. He became a key figure in the Hawaiian cultural renaissance and, with slack-key guitar master Gabby Pahinui, organized the Sons of Hawaii. With the encouragement of Pahinui and two teachers, Mary Kawena Pakui and Pilahi Paki, Kamae began singing as well as playing the ukulele. The group recorded extensively, and Kamae helped produce the album Music of Hawai’I, part of the National Geographic Music of the World series.

In the 1980s, Kamae took up filmmaking to document and preserve Hawaiian culture. His first film was a documentary on the legendary performer and composer Sam Li’a, whom Kamae got to know when Li’a was in his 90s. “When he passed on, I wanted to tell people a story about this kind and gentle man, a man who loved God and who loved people,” Kamae told Eckstein. “That’s how I got into filmmaking. I just went to the [Hawaii Pia Valley] with a film group. I didn’t know anything about the business, but I wanted to do it anyway because I wanted to tell his story. It was important to me and, I think, to all.

“The music came a long way with the Sons of Hawaii,” Kamae said “Now I’m working with another group. I’m trying to gather musicians so they can feel these feelings of the music of old. That’s what I’m trying to share with them. I’m recording some songs right now, songs of old that have never been recorded. I’ve finished twenty-nine songs. I’m doing it now because I want the musicians to feel and understand what it was like in the old days, how the music was written and how it was passed along. You know how the young ones have a tendency to follow each other. They hate Hawaiian music, so they want to change it. It’s only natural in today’s world. But I’m trying to tell the boys that if you can have the steel guitar and the sweet sound of slack-key music, this music will live. I say to the young ones, ‘You say you’re Hawaiian but you’re doing something else. You must feel your grandfather and grandmother’s days and the music of that time and share that with others.’ That’s what I try to tell the children in schools. Ask your grandparents what life was like, what the sound of music was. What was the lifestyle like? That’s what I want them to do to keep this music alive.”

Eddie Kamae talks about how the death of his dad motivated him to play Hawaiian music, interview by Alan Govenar, Bethesda, Maryland, September 18, 2007

Eddie Kamae talks about how hands and fingernails are well suited for the music he plays, interview by Alan Govenar, Bethesda, Maryland, September 18, 2007

Eddie Kamae talks about the importance of teaching his music to young people, interview by Alan Govenar, Bethesda, Maryland, September 18, 2007