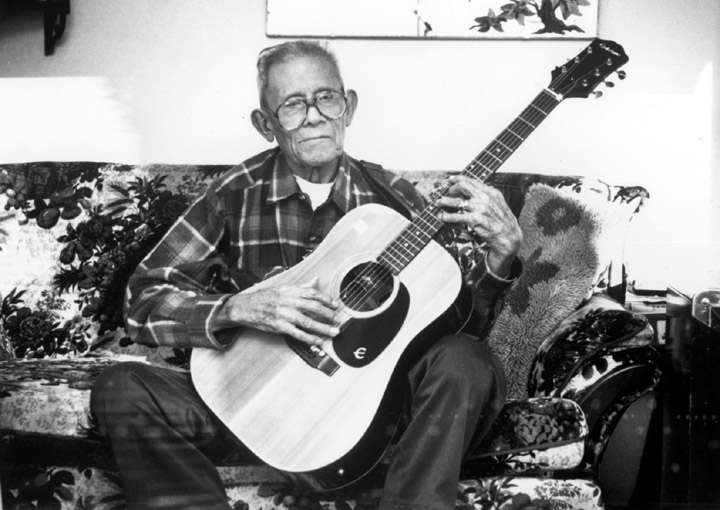 Santiago Almeida was born in Skidmore, Texas, a small, rural town southeast of San Antonio. His family members did farmwork and played music in their free time. By age 15, Santiago was playing bajo sexto, a thick-necked twelve-string guitar with bass strings, in the family group, La Orquesta Almeida, for dances in Brownsville, Harlingen and the San Benito area of the Lower Rio Grande Valley.

About 1934, Almeida teamed up with accordionist Narciso Martínez to play parties and dances. The following year they were invited to the Blue Bonnet Hotel in San Antonio to record for the Bluebird label. This 78-rpm disk of a polka, "La Chicharronera," and a schottische, "El Troconal," is regarded as the first recording of conjunto music. Conjunto literally means "ensemble" and is used for both the music and the groups that play it.

Over the next three years, Almeida and Martínez made sixty more records for Bluebird. During a mammoth session in 1938, they recorded twenty songs in one day. In a relatively short time, Almeida and Martínez became the most imitated and sought-after conjunto musicians in South Texas. They continued to perform together into the 1940s, recording on the Ideal and Disco de Oro labels and backing up popular singers in other sessions. For the most part though, they performed at Mexican dances in the Rio Grande Valley and along the Texas-Mexico border.

Together, Almeida and Martínez defined a new musical style, bringing together the diatonic button accordion and bajo sexto. Almeida played the accompaniment for the innovative accordion leads of Martínez, but was also an innovator himself. He played in all keys without a capo, using a technique similar to what is known today as cross-picking. He used a three-note "bass arpeggio," alternating each bass note with a single higher drone note, all at a relatively high speed. This technique is especially effective in accompanying waltzes and huapangos, but can also be applied to the performance of other musical styles.

After World War II, Almeida's opportunities for musical work dwindled in South Texas as his family increased. In 1950, he took his family north, following the migrant farmworker routes and eventually settling in Washington state, where they picked apples and found other jobs to make a living in their home in Sunnyside, in the Yakima Valley, a center of Mexican migration in that state. Because there were no active conjuntos in the Valley at that time, Almeida became a teacher and mentor to younger musicians interested in his distinctive style. All the while, he continued to play his bajo sexto for family and community gatherings, often at church dances, where he accompanied other musicians and singers.

In 1987, after nearly four decades of isolation from his South Texas homeland, Almeida was inducted into the San Antonio Conjunto Hall of Fame. In 1993, he received the Governor's Heritage Award in Seattle, Washington, for his contributions to the cultural heritage of the state.

Santiago Almeida's son, Joel Almeida answers the question 'What attracted you to your father's style of playing?' Washington, D.C., 1993, interview by Alan Govenar

Juan Barco answers the question 'How were you influenced by Santiago Almeida?' Washington, D.C., 1993, interview by Alan Govenar