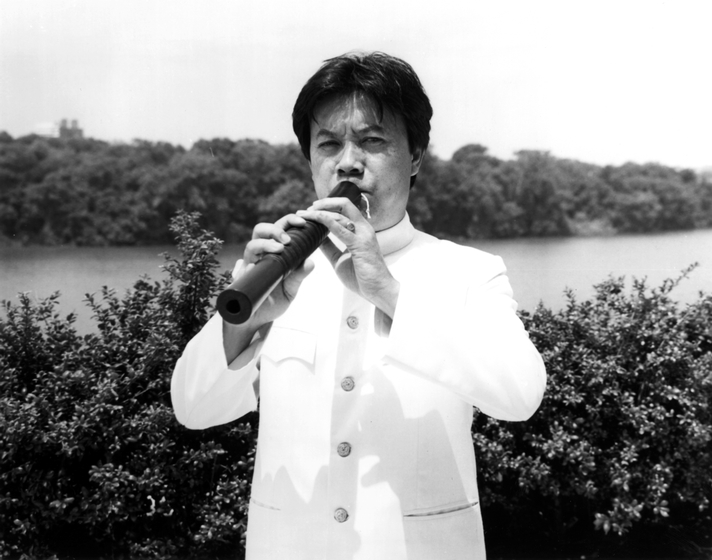 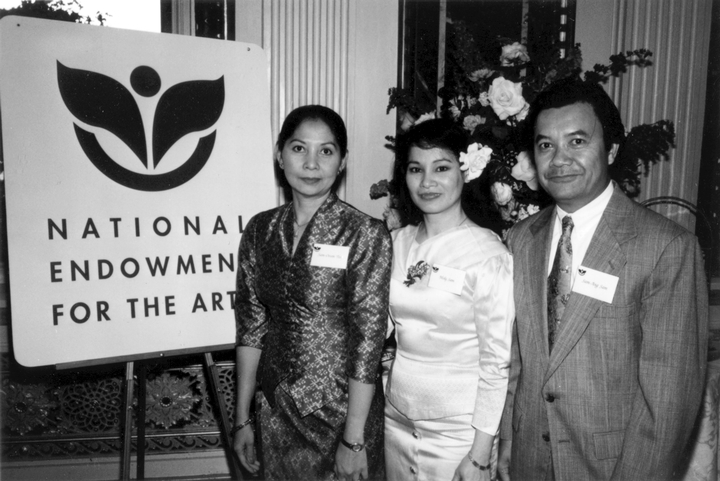 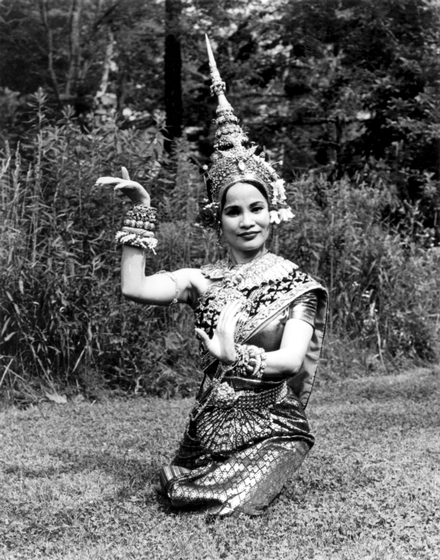 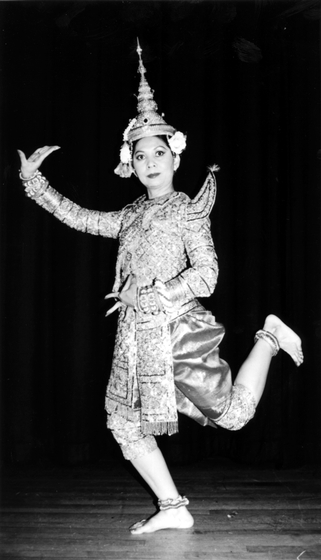 In Cambodia, the Khmer Rouge terror of the 1970s devastated the institutions that supported dance drama. The tradition was uprooted as dancers and musicians who had survived the genocide fled to the United States. Three of these artists, determined to keep their heritage a living part of Cambodian life in the United States, formed the Apsara Ensemble.

Chan Moly Sam came from a prosperous family in Phnom Penh. As a young girl, she was captivated by the Apsaras, the beautiful female celestial figures that adorn the Angkor Wat Temple and appear in the ancient court repertory. She entered the Royal University of Fine Arts at 13 and studied under the revered dance master Chheng Phon.

Under his guidance, Moly gained mastery of the male role, neay rong. She was sent by Master Chheng Phon to study the female role, neang, with another master, Chea Samy. "He was of the conservative tradition of grand masters," she said. "He never gave compliments to students. This is because perfection is an illusion, a constant struggle to reach the higher realm."

Moly's husband, Sam-Ang Sam, came from Pursat Province, Cambodia. When he was 13, the family moved to Pochentong, a small city on the outskirts of Phnom Penh. At 14, he entered the Ecole Nacional de Music, which was absorbed into the new University of Fine Arts. After two years, Sam-Ang switched to the Faculty of Choreographic Arts to study traditional Cambodian music. This was the first time such music had been taught formally.

After four years of study, Sam-Ang had the opportunity to study with two master musicians from the royal palace, Samreth Long and Ouch Sek. From 1968 to 1970, the music students and ballet corps from the university were stationed in Siem Riep, where they performed for tourists and official visitors. There, Sam-Ang studied with village musicians and learned the repertory that accompanies the shadow puppet dramas that originated in Siem Riep.

After the 1970 coup that overthrew Cambodia's monarchy, the university students were moved back to Phnom Penh. In 1974, Sam-Ang and Chan Moly Sam married, and he received a scholarship to study Western composition and to work with Jose Maceda at the University of the Philippines. During the couple's time there, Cambodia fell to the Khmer Rouge, and they were cut off from their home and families.

In 1977, the couple and their daughter, Malene, moved to the Philadelphia area, where Sam-Ang worked in a bakery. But from his arrival in the United States, Sam-Ang performed Cambodian music and organized other Cambodians in cultural activities. In 1980, the family, which included a second daughter, Kaksmi, moved to Connecticut, where Sam-Ang earned bachelor's and master's degrees in composition at Connecticut College. In 1988, he earned his doctorate in ethnomusicology from the university.

In 1986, Sam-Ang and Moly formed the Apsara Ensemble, which remains the country's premier Cambodian performing-arts ensemble. In 1987 and 1989, Sam-Ang received grants from the Social Science Research Council to conduct research on Cambodian culture both in the United States and in Cambodia. Since then, he has traveled back and forth to Cambodia to participate in conferences and to work with his peers at the University of Fine Arts. Sam-Ang says his greatest love is playing Cambodian traditional music. "My life is performance -- I have to do it. No matter what I am doing, I look forward to playing all week long. I cannot live without it."

The third member of the troupe, Sam-Oeun Tes, known by her nickname, Rady, was born in Phnom Penh. Her interest in dancing came from her mother, who had been adopted by a princess and had grown up on the palace grounds. She took her daughter to visit the palace and see the dancers. "I heard the music, and it was like it went right through my body -- I loved it so much," Rady recalled. She immediately began studying with her aunt, a master teacher of the male role. Soon, through the intercession of Princess Bopha Devi, Rady began learning the female role. After a year of study, she was asked to join the advanced dancers in the palace. She performed all over the country for visiting dignitaries.

In 1971, Rady's family arranged her marriage to Sam-Oeun, who was living in the United States. She stopped dancing for several years. "I thought I didn't need it," she said. "But then the Khmer Rouge took over Cambodia."

Moly and Sam-Ang teamed up with Sam-Oeun Tes' group, the Cambodian-American Heritage Troupe, formed in 1980. They performed at the Jacob's Pillow Dance Festival in Massachusetts in 1981 and have been much in demand for Cambodian and other public events throughout the country. When they resettled in the Washington, D.C., area, they intensified their collaboration with Sam-Oeun Tes, performing and teaching regularly. In 1994, Sam-Ang received a MacArthur Foundation Fellowship that allowed him to continue his cultural preservation work in the United States and Cambodia.

Discography
Sam, Sam-Ang. Echoes from the Palace. Music of the World CDT-140.