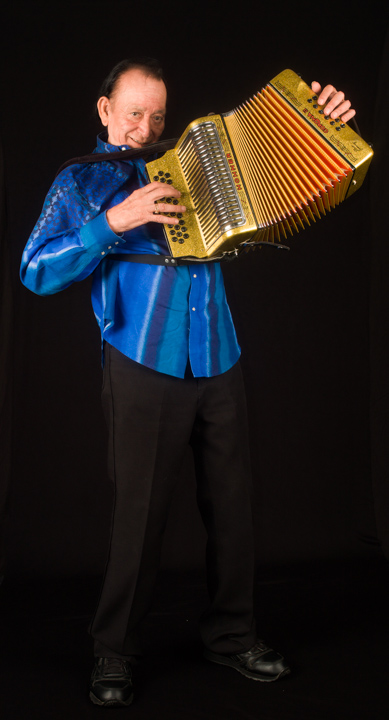 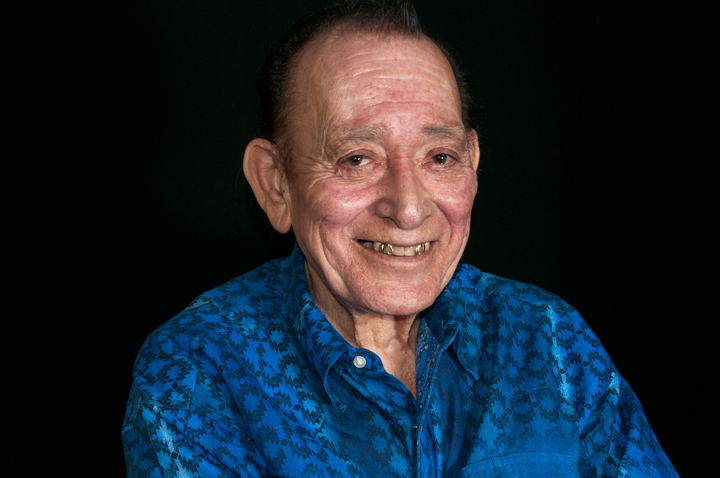 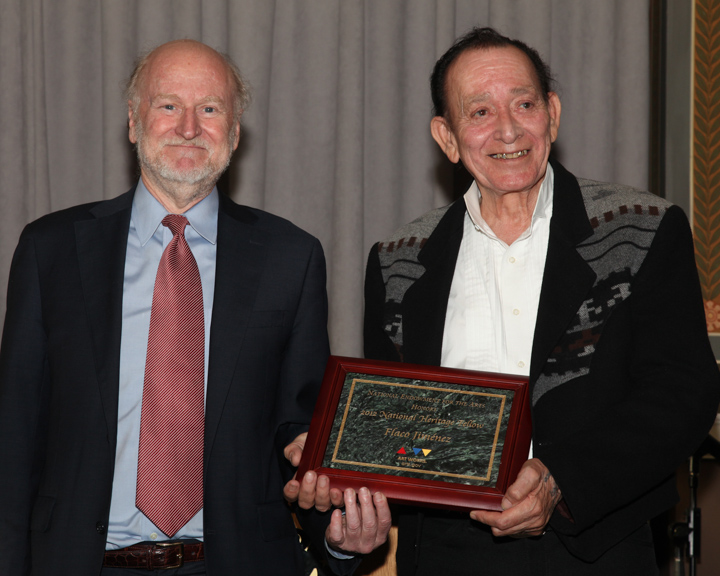 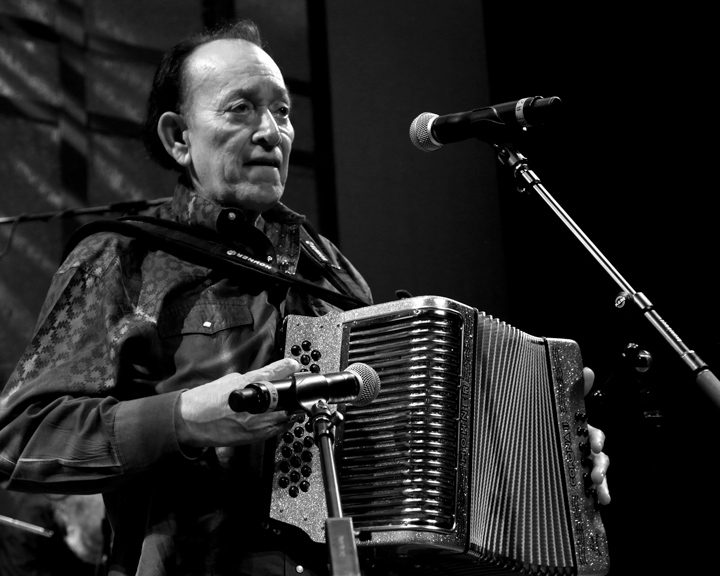 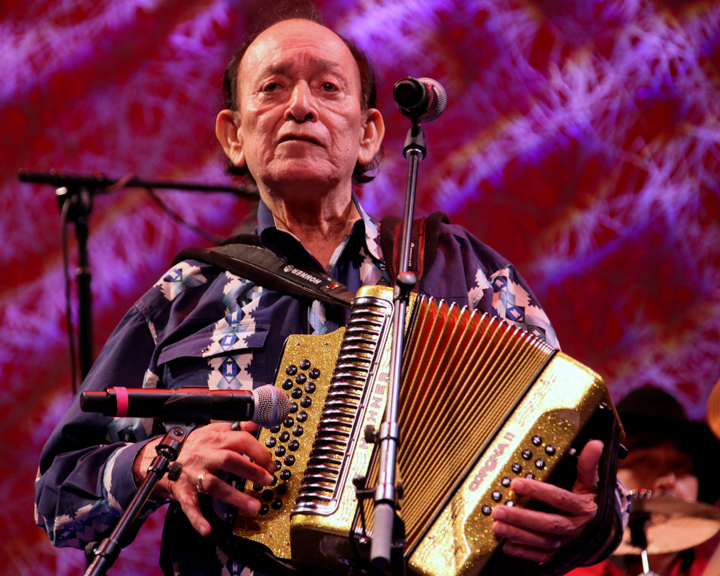 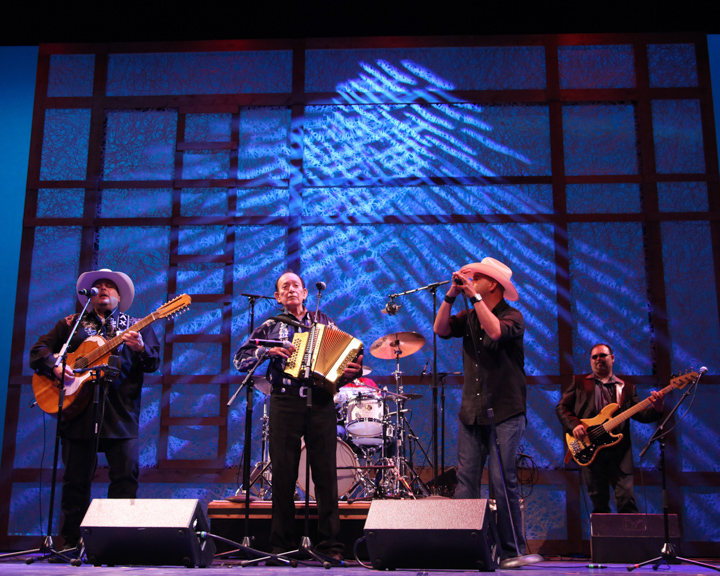 "What B.B. King is to the blues, or George Jones is to traditional country, Grammy-winning accordionist Flaco Jimenez is to the world of Tex-Mex conjunto," says music critic Ramino Burr in The Billboard Guide to Tejano and Mexican Music. Born into a family of conjunto musicians, Leonardo "Flaco" Jiménez has led the way in expanding this music from his community in San Antonio, Texas, to new audiences both in the United States and worldwide.

Jiménez is the son of conjunto pioneer Santiago Jiménez, Sr. By age 7 he was already performing with his father, even earning a nickname that had in the past been attached to his the elder Jimenez, "Flaco," or "Skinny."

Conjunto dates back to the 19th century and is a uniquely Texas tradition. It has a distinctive style, featuring influences from the German, Polish and Czech immigrants who settled in the predominantly Mexican region of the Texan Rio Grande valley and brought with them popular forms of dance music such as the polka, waltz, schottische, mazurka and redowa. Tied to this style of music is the diatonic button accordion, which was adopted by tejanos, or Texans of Mexican descent.

Flaco Jiménez apprenticed on the accordion with various San Antonio musicians, including Toby Torres, Joey López and Los Caminantes, and built his reputation by performing in San Antonio saloons and dance halls. In the 1960s, Jiménez began playing with Doug Sahm, the founding member of the Sir Douglas Quintet, and went on to New York to perform with Bob Dylan and Dr. John. He continued to introduce new audiences to conjunto music, performing with Peter Rowan and touring internationally with Ry Cooder and David Lindsey, receiving international acclaim for his contributions to Cooder's landmark album Chicken Skin Music.

He later joined Sahm again in the 1990s to form the group Texas Tornados with Freddy Fender and Augie Meyers, recording six albums and winning a Grammy. In 1994, he performed on the Rolling Stones' Voodoo Lounge. He also recorded with the "Mexican super group" Los Super Seven that included Fender, Joe Ely, Ruben Ramos, Rick Trevino and Cesar Rosas and David Hildalgo of Los Lobos, netting another Grammy. In total, Jiménez has received five Grammy awards, including three for his solo work. In 1999, he received a Lifetime Achievement Award from Billboard Latin Magazine and has been inducted into the National Hispanic Hall of Fame and the International Latin Music Hall of Fame in New York City. At the 2015 Grammys, he received a Lifetime Achievement Award.

Over the years, Jiménez has expanded conjunto music to include influences from country and Western, rock and jazz.. In an interview for American Roots on PBS, Flaco explained, "I started making conjunto more progressive because of the versatility that I believe in. I think it's good to change it a little."

Leonardo "Flaco" Jiménez answers the question 'How did you get started playing the accordion?' Washington, D.C., 2012, interview by Alan Govenar

Leonardo "Flaco" Jiménez answers the question 'Have you always been a singer, too?' Washington, D.C., 2012, interview by Alan Govenar

Leonardo "Flaco" Jiménez answers the question 'How has your music changed over the years?' Washington, D.C., 2012, interview by Alan Govenar

Leonardo "Flaco" Jiménez answers the question 'What about the other musicians in your family?' Washington, D.C., 2012, interview by Alan Govenar

Leonardo "Flaco" Jiménez answers the question 'How did you get your nickname "Flaco"?' Washington, D.C., 2012 ,interview by Alan Govenar