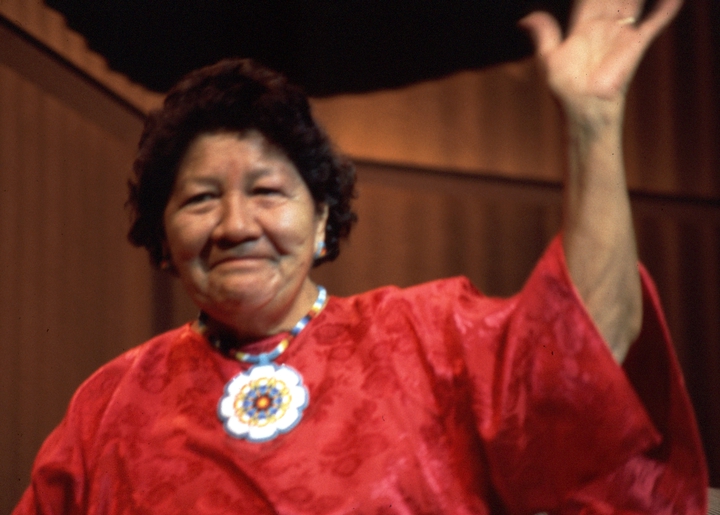 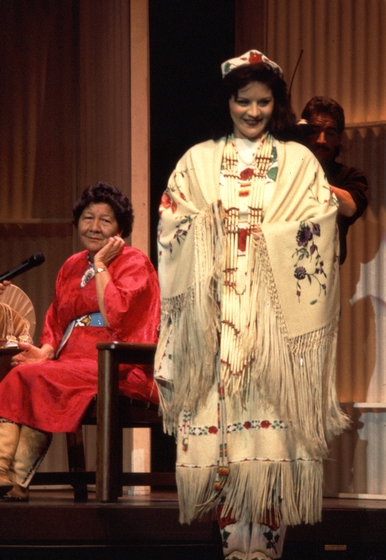 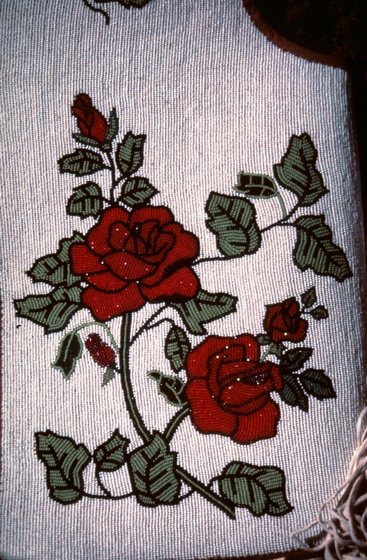 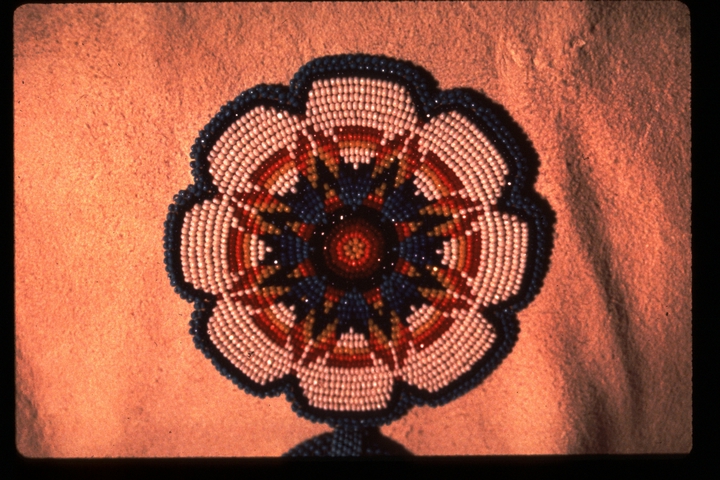 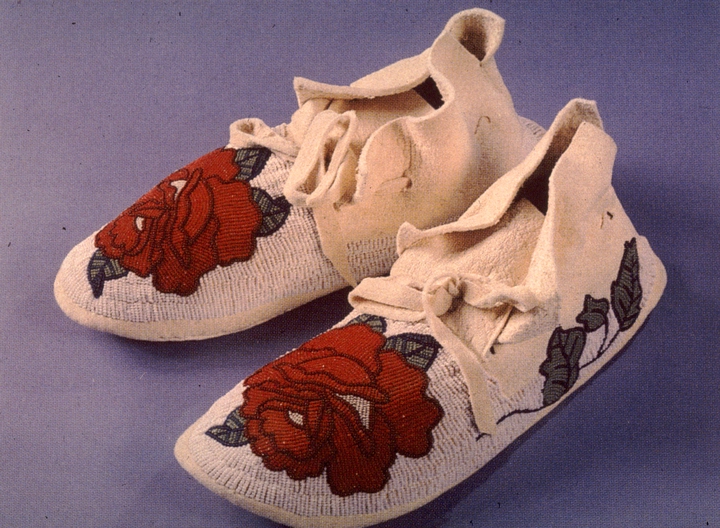 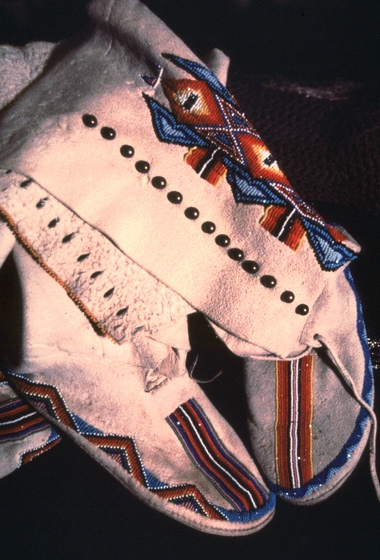 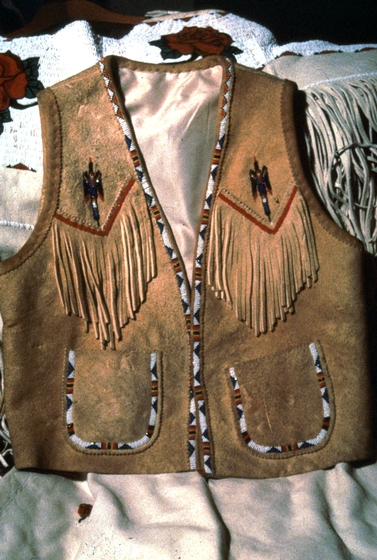 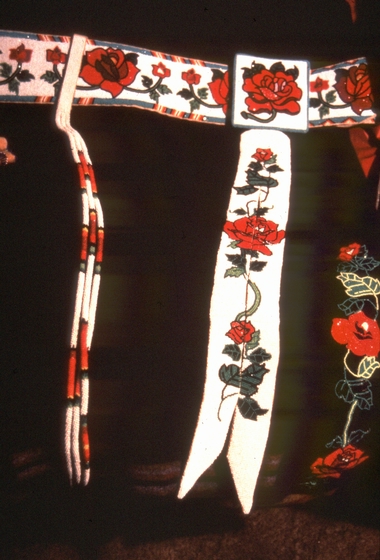 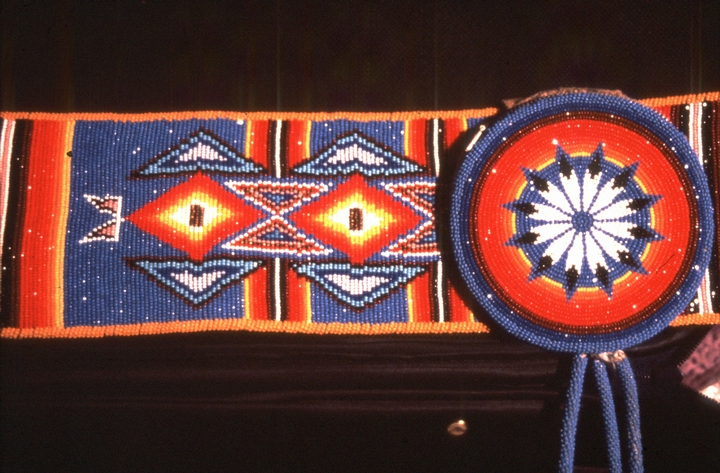 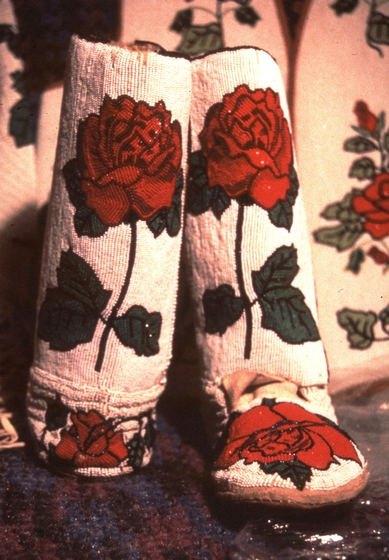 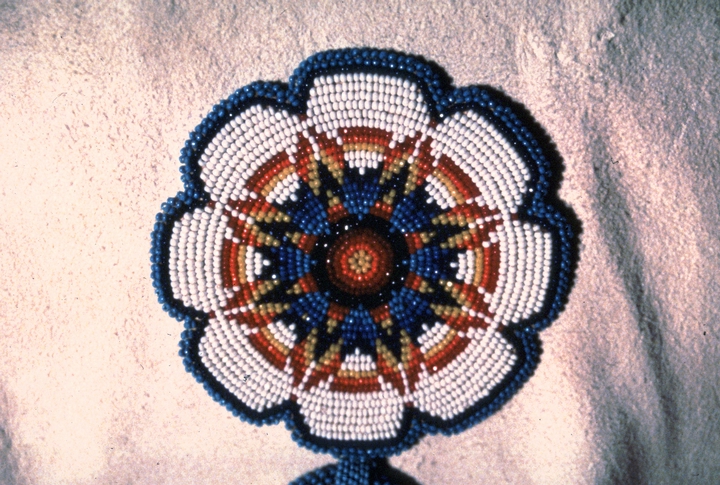 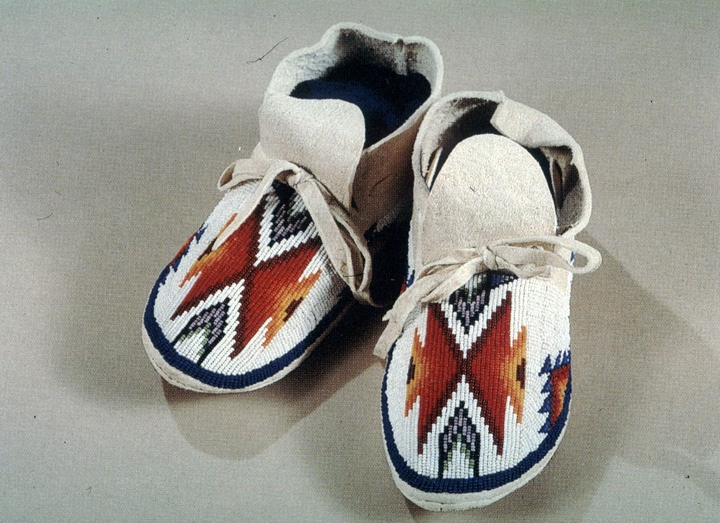 Eva Washakie McAdams, born in Fort Washakie, Wyoming, on the Wind River Reservation, was the great-granddaughter of the renowned nineteenth-century Shoshone leader Chief Washakie. As a child, she learned beadwork, an integral part of Shoshone life that is passed on through generations within families. "All of the women in the Washakie family are noted for their beadwork," she said. "I was taught at home by my mother. It's something that was handed down."

In time, McAdams was able to do exquisite beadwork and buckskin sewing. The teachings of her mother were augmented by her grandmother Mary Washakie and her aunt Virginia Norseep.

Using a palette of fine seed or cut ceramic beads applied either to Indian smoked and tanned buckskin or to commercially available white buckskin, she crafted a wide variety of items — ceremonial vests, pants, dance dresses, belts, purses, pendants and other traditional wares. Among her most prized creations were moccasins, both lowtop and hightop, with elaborately decorated leggings. She applied the beads with either a "lazy" or an overlay stitch. Some of her beads were extremely small, only a little larger than a pinhead. She preferred ceramic beads, but also made extensive use of cut-glass beads, many of which were imported from the Czech Republic.

Floral patterns — especially the rose, long preferred among her Eastern Shoshone people — and traditional geometric designs shaped most of her work. Although Plains moccasin designs and customs are often gender-specific and vary from tribe to tribe, many of McAdams' popular designs are worn by both men and women.

Eva and her husband, Alfred "Dutch" McAdams, operated a ranch near the Little Wind River in the foothills of the Wind River Mountains west of town. She raised six children and taught her daughter to sew and bead, but also continued to make ceremonial and dance regalia, which she often sold to other members of her tribe. As her reputation grew, so did the number of commissions she received. To supplement her regalia making and beadwork income, and to contribute to the betterment of her community, she worked a number of jobs. For five years she managed the tribally owned Warm Valley Arts & Craft Store. Later, she started a small business supplying beads, buckskin, and other natural materials to other artists because she was dissatisfied with the quality of some commercially produced goods needed for traditional Shoshone crafts. In addition, she worked as a federal magistrate for the Law and Order Court System operated by the Bureau of Indian Affairs on the Wind River Indian Reservation. She was a counselor to Indian inmates at the Wyoming State Penitentiary in Rawlins, and served as an election judge for Fremont County and as a researcher for Title IV projects on traditional foods and medicines.

Beadwork remained central to her life. While working in these various jobs, she continued producing Shoshone regalia and beaded garments. Although her designs were based on older traditions, she did not do historic reproductions. If she was asked to reproduce old designs, she made them subtly different. She believed that the old designs should not be duplicated if they had lost their meanings and personal associations. Her designs incorporated traditional Plains Indian aesthetics while embracing personal and contemporary concerns.

Sewing buckskin is referred to as a survival technique among the Shoshone. Buckskin was traditionally the primary material available for garments, and skilled buckskin sewers were essential to the tribe's survival, especially during the long, cold Wyoming winters. Beaded clothing like that McAdams created is now used mainly in Indian pageantry, but garments with minimal beadwork may be used for everyday wear.