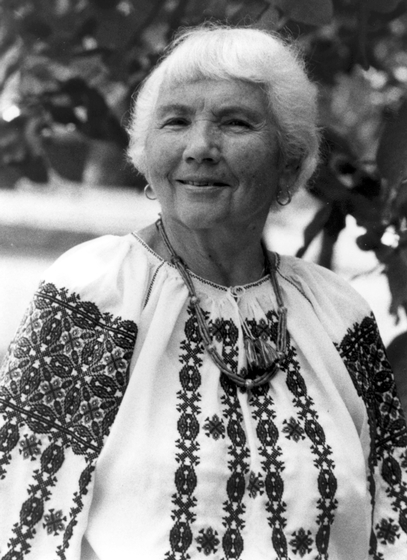 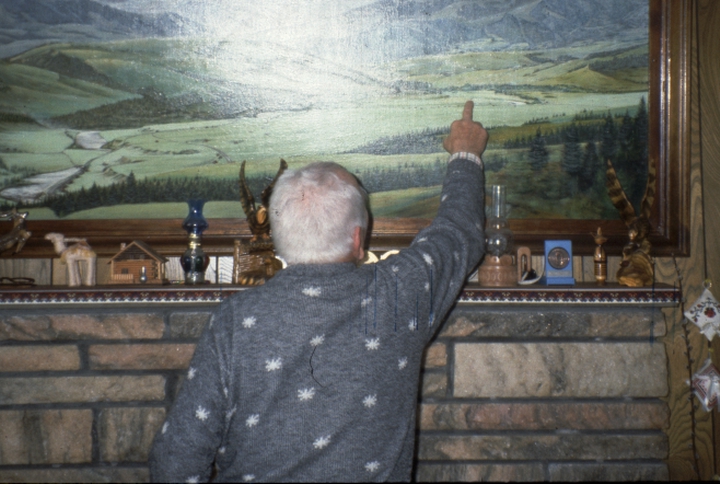 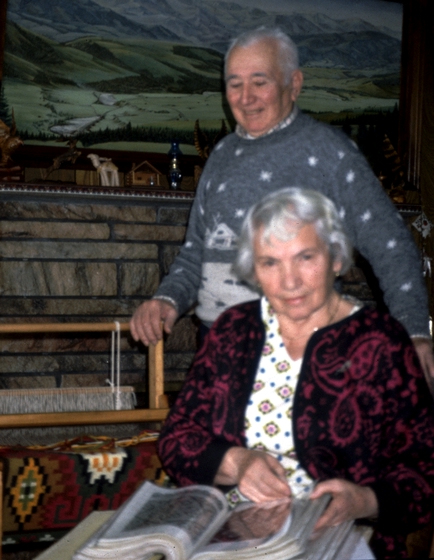 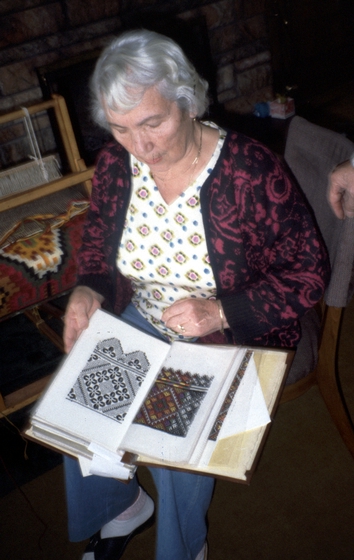 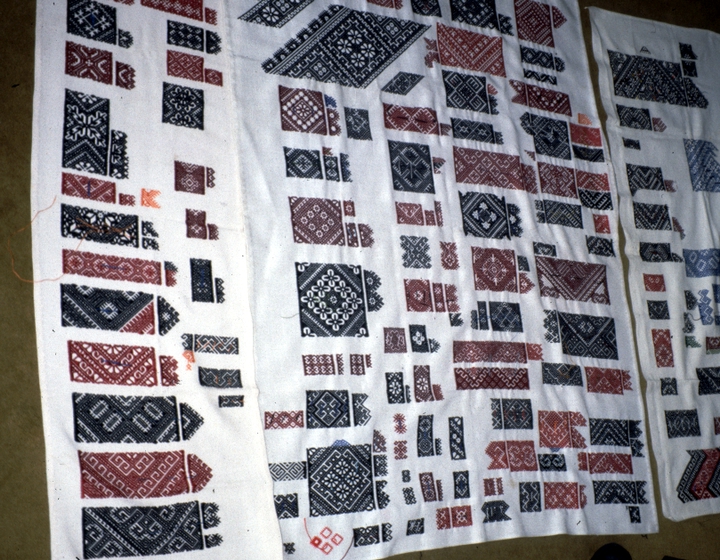 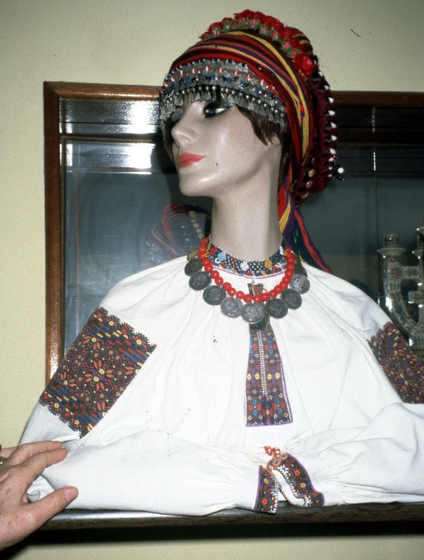 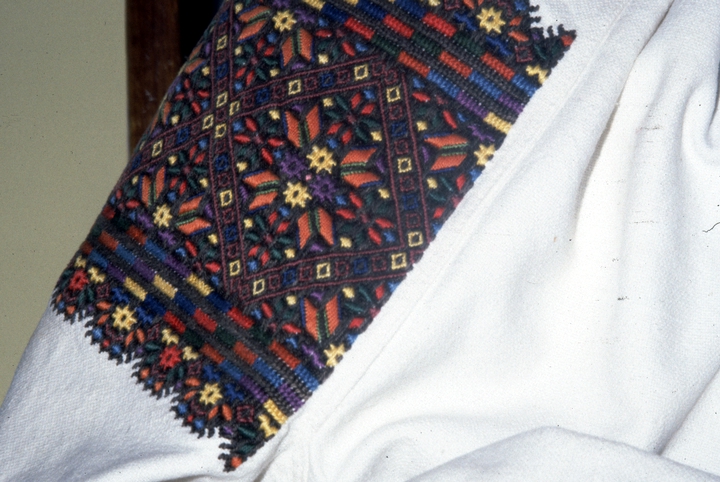 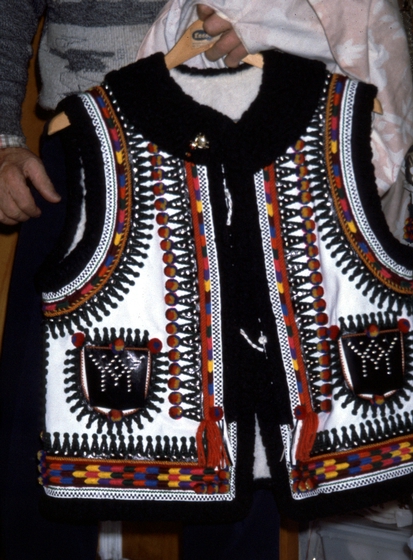 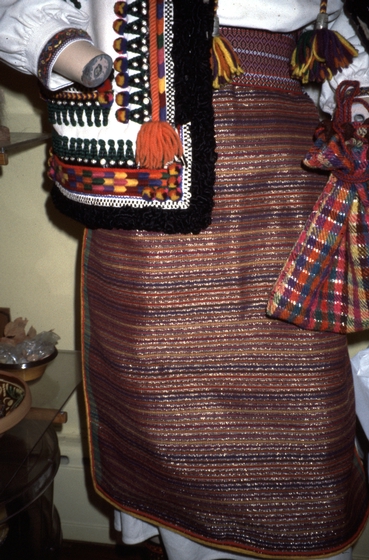 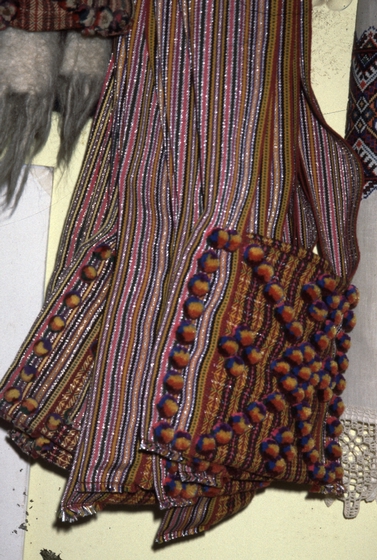 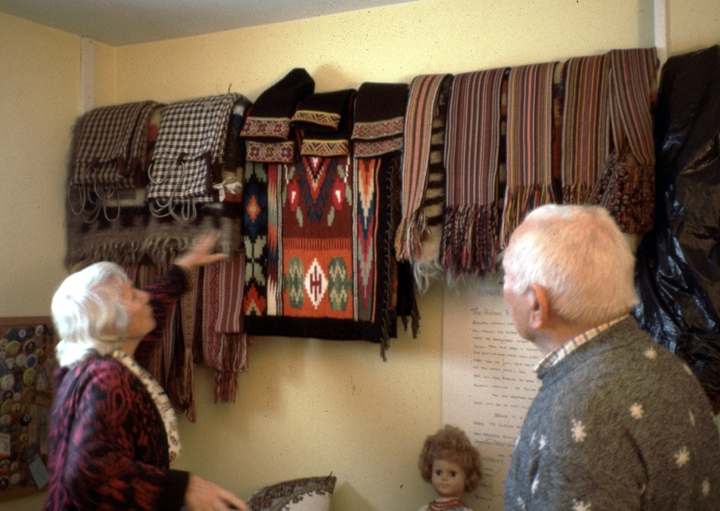 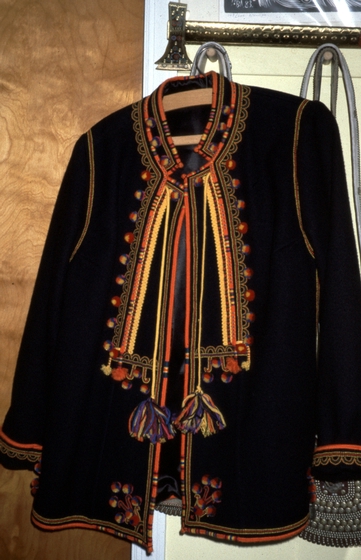 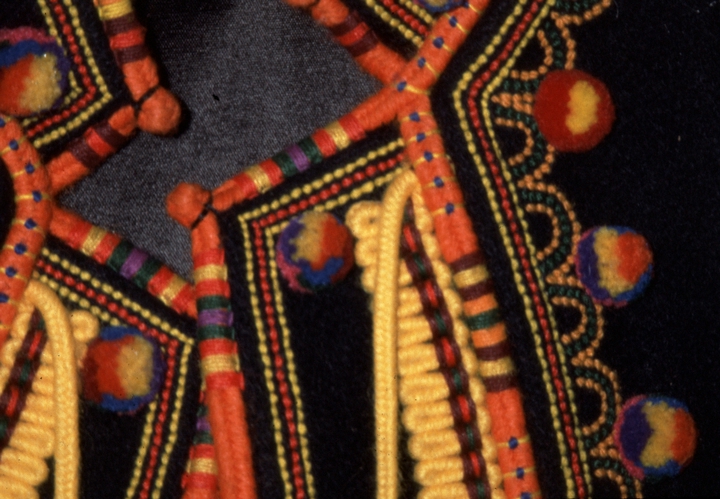 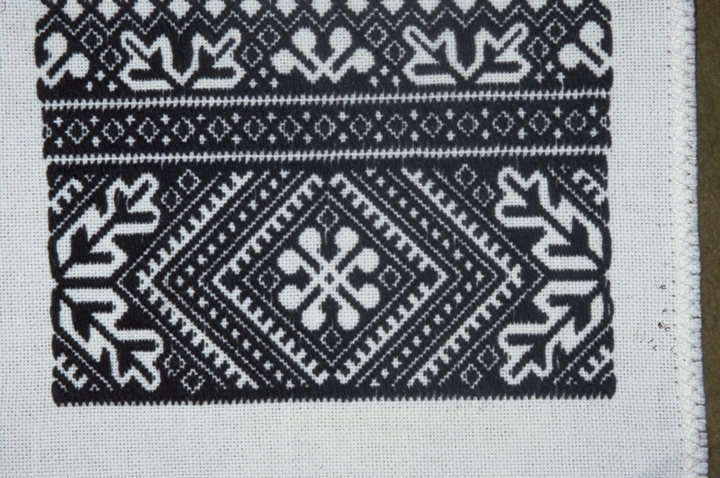 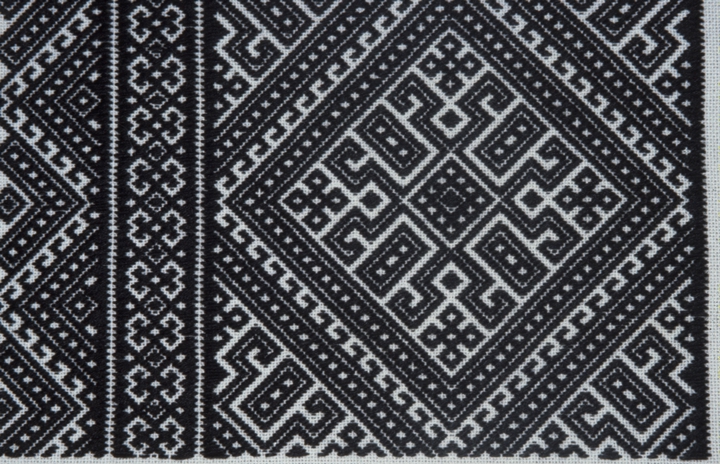 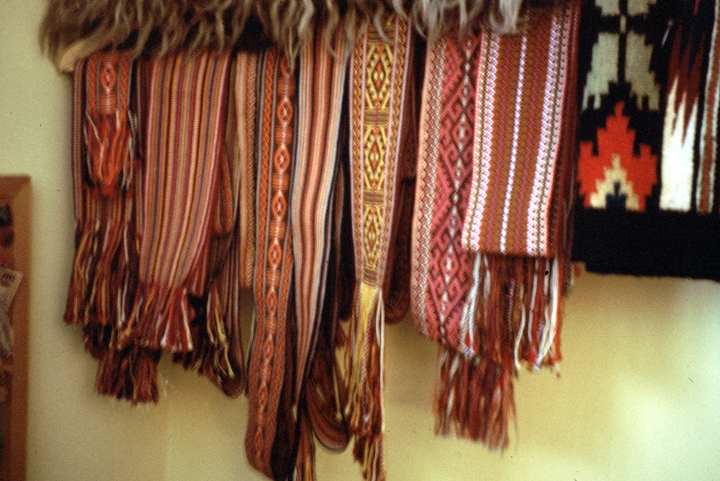 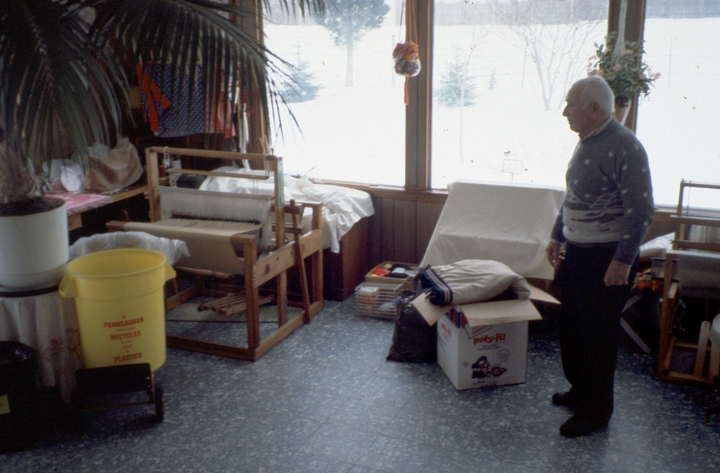 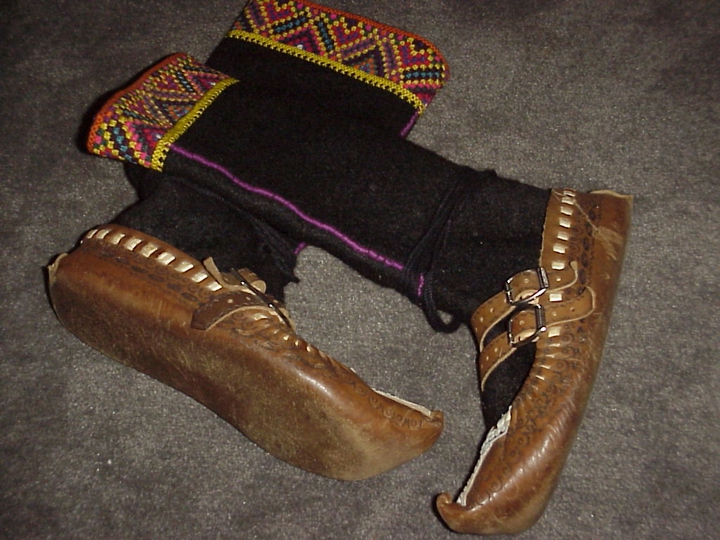 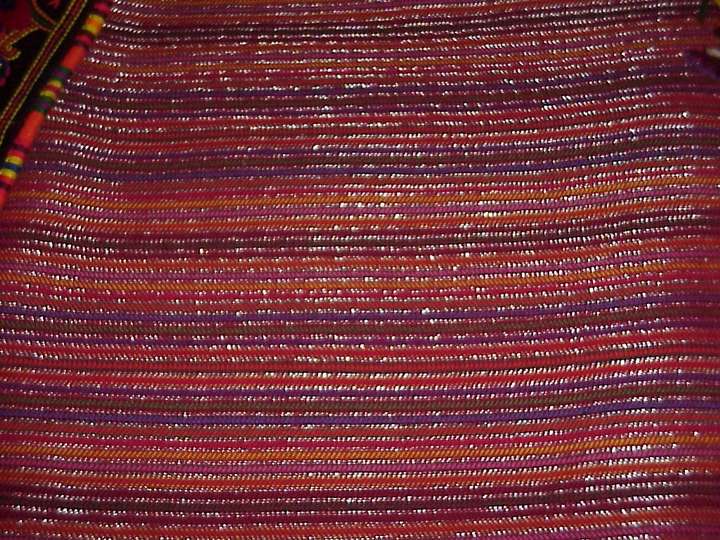 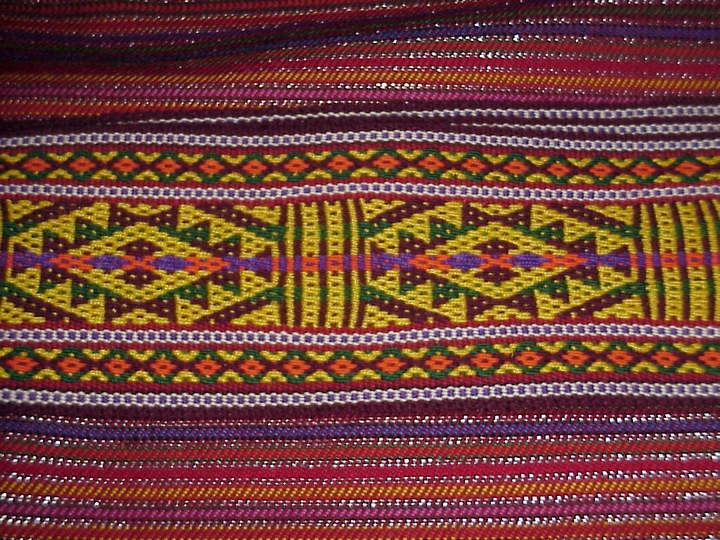 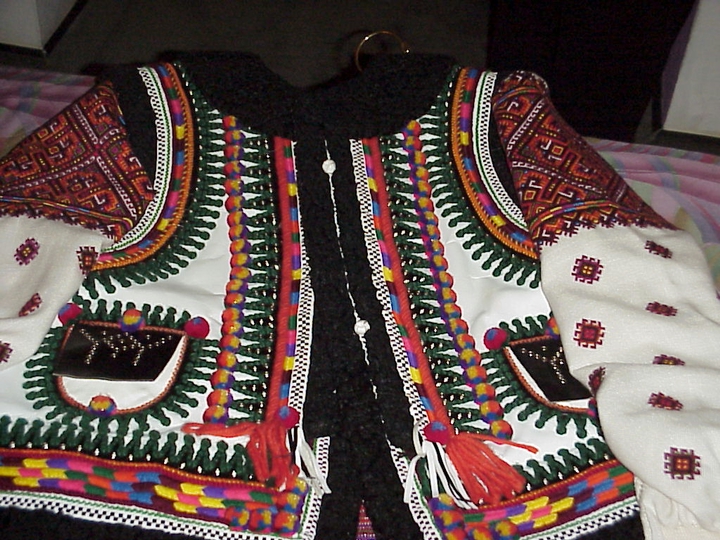 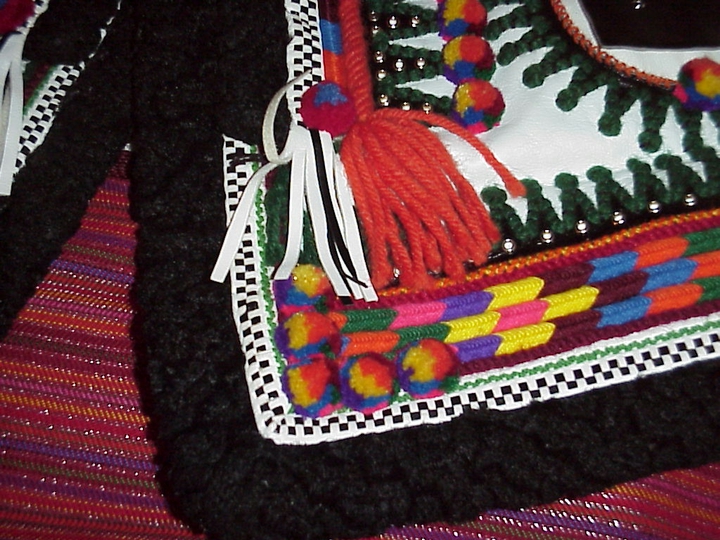 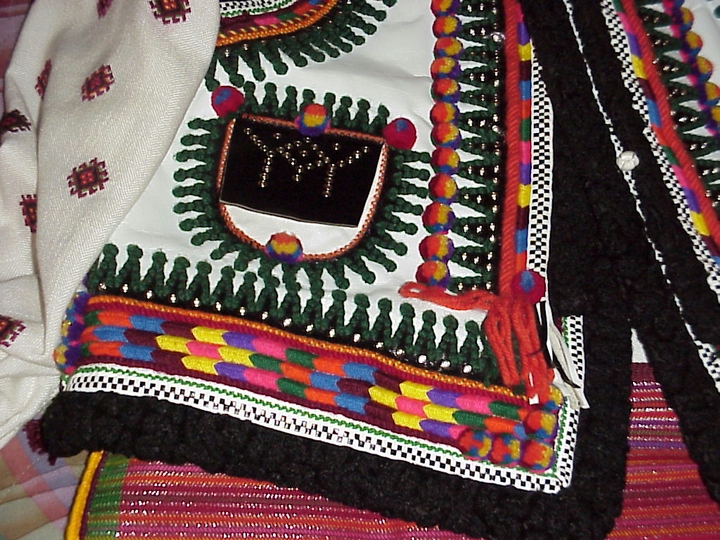 Eudokia Sorochaniuk (Evdokeeya Verstiuk Sorochaniuk) came from Zhab'ye, a town in the Carpathian Mountains in Ukraine. Eudokia, a daughter of a subsistence farmer, learned the arts of nyzanka (embroidery) and weaving as a young girl by watching her sisters. She began teaching herself embroidery at the age of 6 by stealing thread from an older sister and hiding away to practice. She developed most of her skills under the tutelage of the women in her own home. After a two-month apprenticeship with a master weaver when she was 16 years of age, Sorochaniuk gained recognition as a highly skilled weaver in her village.

During World War II, the Soviets took control of Zhab'ye, where Eudokia was working as a master weaver. Fearing deportation to Serbia, Eudokia and her husband, Dmytro, fled across the mountains to Hungary. After living in a displaced persons' camp in Germany for five years, the Sorochaniuks were sponsored by a Ukrainian group to come to the United States. Within a few months, they settled in Philadelphia. Eudokia quickly got a job in a garment factory, where she worked as a seamstress. Even after sewing all day, she wanted to resume her weaving. Dmytro, a skilled craftsman, built her a loom so that she could weave at home. Eventually, he had to build several more looms to accommodate some of the women from neighboring communities who wanted to learn Hutsul (Ukrainian) weaving. In 1952 the Sorochaniuks bought farmland in Pennsauken, New Jersey. After building the house, Dmytro constructed additional looms for his wife, basing his design on the looms she had used in Ukraine. Later, he invented machines to turn threads for Eudokia and her fellow weavers.

The ravages of World War II and the threat of cultural annihilation had heightened Eudokia's dedication to maintaining her weaving and embroidery skills in particular, and to preserving her native region's traditional culture in general. During her years in the United States, she continued the work she had started in the displaced persons' camp. She recorded traditional patterns and designs, wove clothing and collected Hutsul folk arts. Sorochaniuk had several albums filled with fabric "pages" illustrating hundreds of reverse flat stitch patterns stitched in the traditional colors. Included among these were three rough cloths on which she recorded native patterns while in the camp, and samples collected from other displaced Ukrainians in the camp. Her "scrapbooks" became so well known within the Ukrainian American community that Ukrainians from all over the country continued to send her scraps. Each page showed a traditional design, one-half of which was stitched in the traditional colors, the other in black and white, so that both the counted-stitch pattern and the traditional colors would be visible to observers. Because many of the samples were brought with her from Ukraine, they were important examples of her culture's traditional arts prior to Soviet censorship.

The Hutsul style of embroidery that Sorochaniuk practices is called nyzanka. It is more common to Hutsul culture than the traditional Ukrainian cross-stitch. Nyzanka is a painstaking process that produces a rich decoration. The work begins with embroidering the reverse of the cloth with the background color, following the weft. Then the brightly colored design is stitched on the right side of the material. Nyzanka refers not only to the embroidery technique, but also to specific designs. Bright colors and geometric patterns are characteristic of nyzanka. Sorochaniuk's embroidery expertise is most vividly displayed in the costumes she creates for the Cheremosh Ensemble, a traditional Hutsul folk dance ensemble that her husband directs. She prides herself on careful finishing and the small, deft touches that make a work completely satisfying. She may make small changes that show her own craftsmanship, but she is conservative with innovation, always working within the framework of tradition. Seventy years of practice, a good eye for detail, and skilled hands make Sorochaniuk's work exquisite.

For many years the Sorochaniuk home has been the center of folk arts activity for the Ukrainian Americans of the Delaware Valley, a community of more than 70,000 people. Sorochaniuk has conducted both informal and formal apprenticeships since arriving in the United States. In her role as a master artist, she teaches more than textile arts: She shares with her students the history of patterns and the traditional uses for garments, bags, and other articles. Several women who learned Hutsul textile arts from Eudokia have modified the traditions to incorporate traditional elements into modern life for everyday use. For example, one woman used a design traditionally woven into a besaha (woven saddlebag), an article not commonly used in the suburbs of New Jersey, for a table runner. In subtle and important ways, her formal and informal teaching stimulates an appreciation for the fragility of traditional culture, even as modified to "fit" into a modern lifestyle. Although some modifications take place, other articles are cherished in their original form, and women are committed to making them the traditional way. Dora Horbachavsky, one of the women who has spent many months learning Hutsul weaving from Sorochaniuk, vowed that she was "absolutely going to learn to make the wedding headdress, or trisunka."

Following the breakup of the Soviet Union, Ukrainians struggled to recapture their cultural forms that were highly regulated and censored under Soviet occupation. Sorochaniuk traveled back to Ukraine twice in the mid-1990s and discovered that the folk traditions, considered by the Communists to be a sign of Ukrainian nationalism, had been obliterated. When the young women there met her and saw her work, they sought Sorochaniuk's help in learning the native weaving and embroidery arts that traditionally would have been passed along from mothers to daughters. Since that time, Hutsuls from the Ukraine have come to the Sorochaniuk home to learn their native arts as practiced prior to the cultural destruction that took place during World War II.

Through her ongoing creation of nyzanka and traditionally woven articles, Sorochaniuk has maintained a remarkably close tie to her heritage. Her participation in workshops, seminars, and community programs has ensured that others of Ukrainian descent in the United States and Ukraine are learning the skills and history of the Hutsul traditional culture.

Bibliography
Klymasz, Robert B., ed. Art and Ethnicity: The Ukrainian Tradition in Canada. Quebec: Canadian Museum of Civilization, 1991.
Nebesh, Daria L. Because It's Ours: Constructing Identity in the Ukrainian Disapora Through Hutsul Music and Dance. Ph.D. dissertation. Baltimore: University of Maryland, 1998.

Eudokia Sorochaniuk talks about how she got started as a weaver and textile artist, Washington, D.C., 1999, interview by Alan Govenar