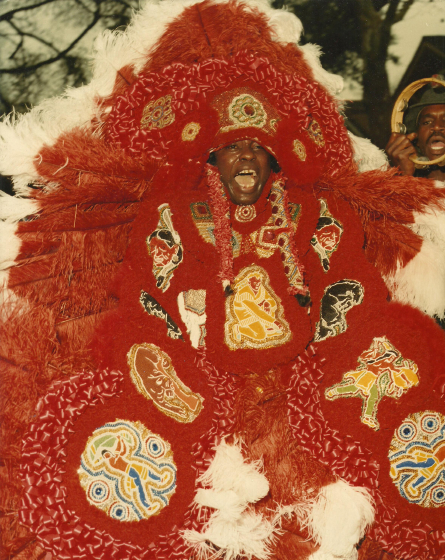 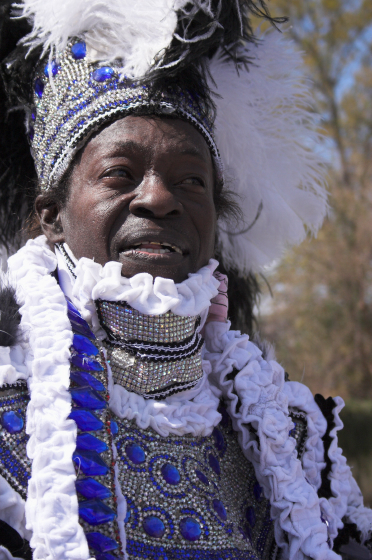 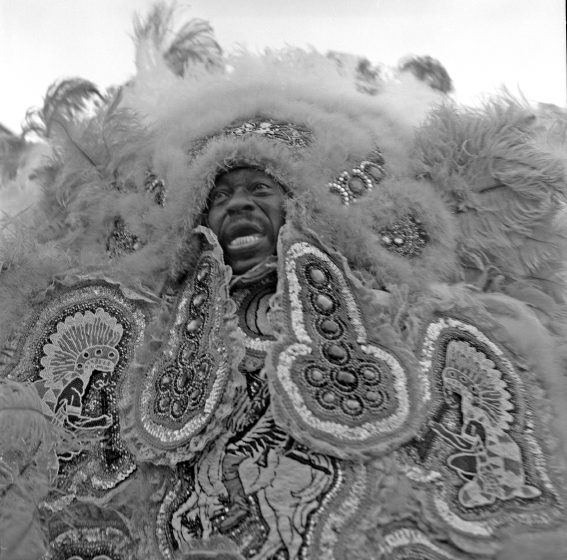 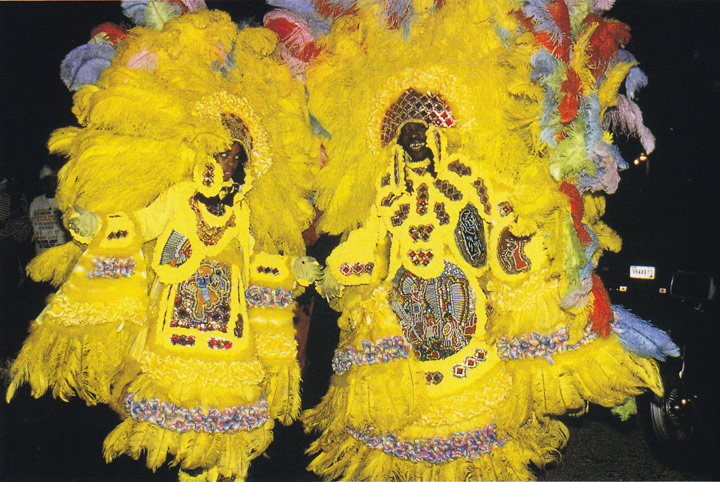 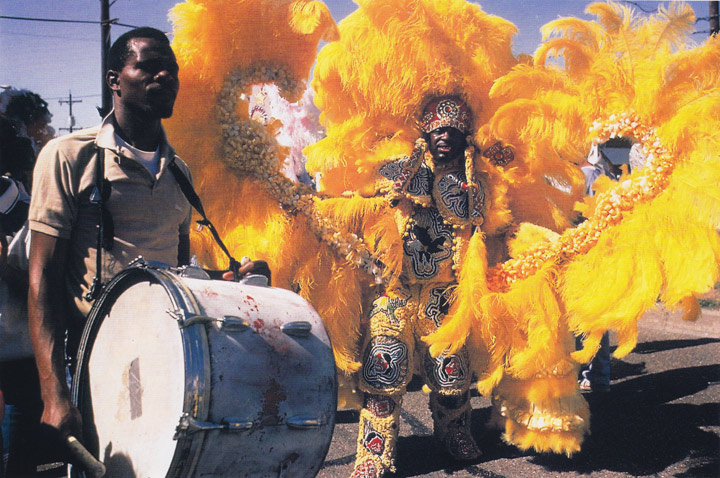 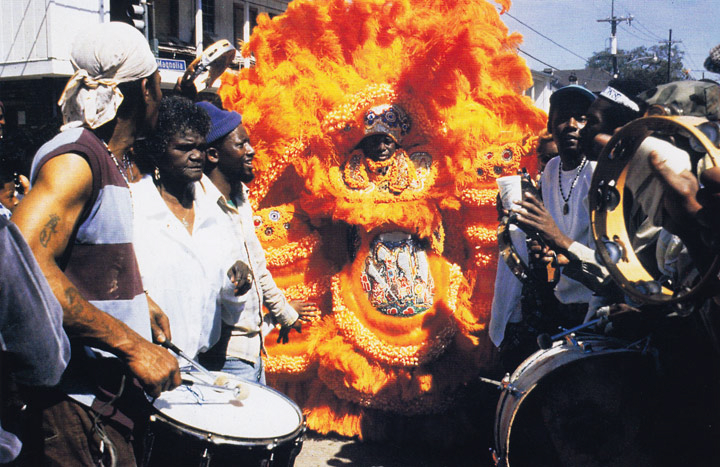 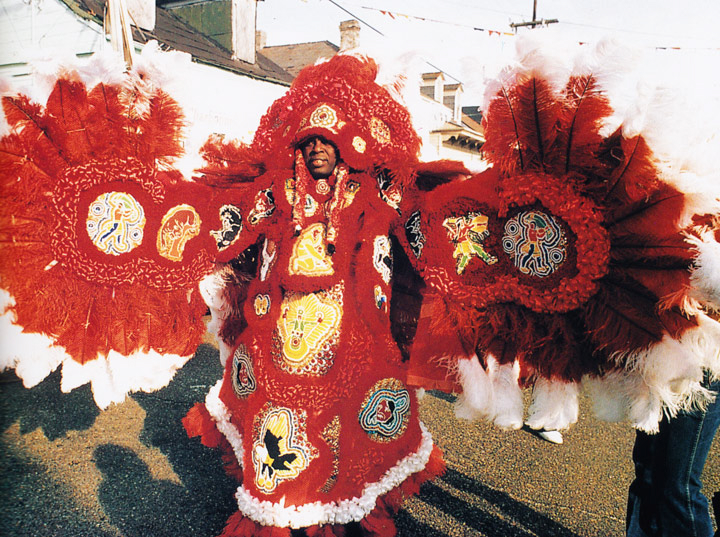 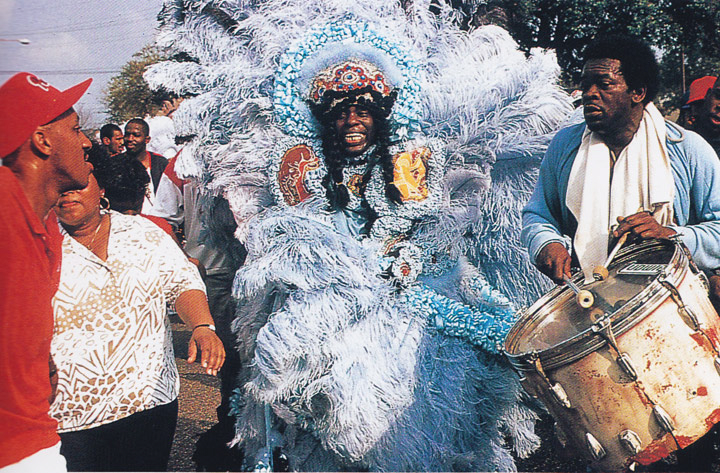 While growing up in New Orleans’ Central City section, Theodore Emile “Bo” Dollis became interested in the city’s Mardi Gras Indian tradition, which is believed to have begun in the late 19th century. Members of tribes, organized along neighborhood lines, take as long as a year to create elaborate costumes to wear during Mardi Gras, a practice known as “masking Indian.” They also parade while singing and chanting on St. Joseph’s Day in March and on Super Sunday, the Sunday closest to St. Joseph’s Day. In the early days of the tradition, the tribes sometimes engaged in physical combat, but now the rivalry is ritualistic.

Dollis secretly attended Sunday night practice sessions in a friend’s back yard and followed the White Eagles tribe, playing and singing the traditional repertoire. In 1957, he created his first costume, working at someone else’s house to hide the activity from parents, and told them he was going to a parade. His father, however, recognized his son beneath a crown of feathers as he paraded with the Golden Arrows tribe.

In 1964, Dollis became chief of the Wild Magnolias, a tribe that takes its name from Magnolia Street in the Uptown/Mid-City area. He gained renown for his artistry in creating beautiful, elaborately beaded costumes and for his vocal prowess. In 1970, he and his tribe performed at the first New Orleans Jazz & Heritage Festival along with Golden Eagles Chief Monk Boudreaux. Dollis and the Magnolias continued to appear at Jazz Fest and at venues and events in the United States, including the Smithsonian Folklife Festival in Washington, D.C., and Carnegie Hall in New York City, and around the world. The have also recorded extensively, merging the Indian sound with New Orleans rhythm and blues and working with such Crescent City musicians as Allen Toussaint, Earl King, Snooks Eaglin, Willie Tee and Dr. John.

Despite health problems and Hurricane Katrina’s devastating impact on New Orleans, Dollis opened Handa Wanda’s. The neighborhood club, named for an Indian chant, has become a focal point for Indian culture. He turned active leadership of the Magnolias over to his son Gerard, known as “Little Bo.”

Bo Dollis's son Gerard Dollis (Bo Dollis Jr.), answers the question 'What does the Mardi Gras Indian tradition mean to you and your family?' Telephone interview by Alan Govenar, July 5, 2011